It’s clear that something odd happened to the three dozen/plus U.S. embassy workers and family members in Cuba and China. Initially, victims’ reports of experiencing loud sounds in homes and hotel rooms followed by headaches, dizziness, and insomnia were met with skepticism—after all, nobody else heard any sounds. However, a medical team examined the 21 affected diplomats from Cuba and released a report concluding that “patients experienced cognitive, vestibular, and oculomotor dysfunction, along with auditory symptoms, sleep abnormalities, and headache.” The report also said, “These individuals appeared to have sustained injury to widespread brain networks without an associated history of head trauma.” Lead author Douglas H. Smith told the New York Times that the team cheekily called the mysterious injury the “immaculate concussion.” 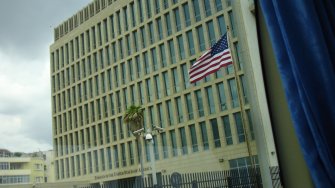 But what caused this trauma? Smith thinks the probable source of the baffling injuries is a secret, microwave-based weapon aimed at the Americans by… who? Others think there’s something far less exotic going on, maybe group hysteria. It’s really not clear who’s right. For example, the New York Times‘s coverage points toward a microwave weapon, while the equally respectable Washington Post finds the idea ridiculous.

The most unique aspect of these events are the sounds no one else can hear. At first, sonic weapons were thought to have been used. However, in 1961, biologist Allan H. Freydiscovered that a stream of very short—about 10 microseconds each—microwaves can fool the brain into hearing a sound that isn’t there, even at power levels 160 times lower than the legal safety standard. Microwaves aren’t something we can hear directly, so it’s believed that they momentarily heat and thus expand water in brain tissue, causing vibrations the ear can discern. 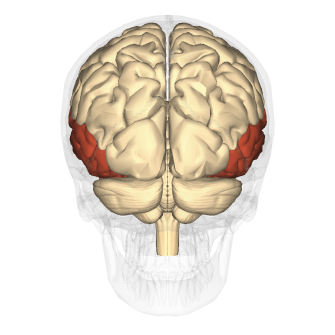 Frey found that the temporal lobe is the most sensitive to microwaves. (Wikimedia Commons)

Since this discovery, researchers from the U.S. and the Soviet Union/Russia have attempted to weaponize this phenomenon, and it’s likely others countries have also investigated the possibility. The fear is that someone figured out how to turn microwaves into a weapon. This would look like a small, portable dish that could be deployed by a single person in, say, a van. The wife of one consulate employee did claim to have seen a van racing away immediately after she herself heard unexplained sounds.

In 2017, the Associated Press released what they claimed is a recording of one of the reported sounds; although, obviously, inaudible sounds can’t be recorded. In saying that embassy workers identified this as the sound they heard, it seems likely the Associated Press played them different sounds until the workers gave this particular one the nod (the Associated Press hasn’t explained the origin of the audio recording).

Kenneth Foster, a professor of bioengineering at the University of Pennsylvania told Live Science, “It isn’t even close to a plausible theory.” Foster was an investigator of microwave weapons for the U.S. Navy in the 1970s, and he said, “You’d have to increase the intensity from anything that’s been experimented by maybe seven or eight orders of magnitude, and then the subject would just go up in smoke.” Of the microwave idea, he said, “It’s crazy,” and that it may be that something happened, “but it’s sure as heck not microwaves.” 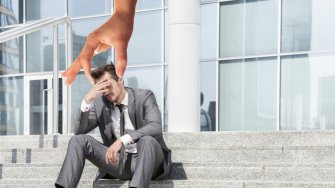 Charles Rosenfarb, the State Department’s medical director, gives the impression that some are getting way ahead of themselves. He told the Washington Post, “We’re seeing a unique syndrome. I can’t even call it a syndrome. It’s a unique constellation of symptoms and findings, but with no obvious cause.”

For their part, the Cuban government looked into the reports and concluded that something like mass hysteria—what they called a “collective psychogenic disorder”—was at the heart of the phenomenon. According to Mitchell Valdés-Sosa, director of the Cuban Neurosciences Center, “If your government comes and tells you, ‘You’re under attack. We have to rapidly get you out of there,’ and some people start feeling sick […] there’s a possibility of psychological contagion.”

James Lin is an expert in the so-called Frey effect, and he released a paper in January that found, “It is plausible that the loud buzzing, burst of sound, or acoustic pressure waves may have been covertly delivered using high-power microwave radiation, rather than blasting the subjects with conventional sonic sources.” He stated that, “Depending on the intensity of the impinging microwave pulses, the level of induced sound pressure could be considerably above the threshold of auditory perception at the cochlea—approaching or exceeding levels of discomfort (including the reported headaches, ringing in the ears, nausea, and problems with balance or vertigo) and even causing potential tissue injury.” Could this be the low-power mechanism that answers Foster’s objection?

Another scientist who considers a microwave weapon to be a plausible candidate is Beatrice A. Golomb, of University of California, San Diego. Golomb is an expert in the controversial field of radio-frequency radiation sickness. In October, she expects to publish medical evidence in the peer-reviewed Neural Computation showing how the symptoms of the embassy workers and their families line up closely with radiation sickness, providing further support for the microwave weapon theory.

While it certainly seems like something out of sci-fi or a fevered Cold War fantasy, there is a scientific basis for a microwave, brain-damaging weapon. Of course, this assumes military research has been taking place deep in the shadows for half a century, and that some secret sauce has been formulated that allows such weapons to inflict brain damage without vaporizing its victims.

What do you think?

Between fake vaccine passports and targeted supply chain attacks, things are only getting more risky.
Up Next
Surprising Science

Ever since we’ve had the technology, we’ve looked to the stars in search of alien life. It’s assumed that we’re looking because we want to find other life in the universe, but what if we’re looking to make sure there isn’t any?