Twice the size of Earth, planet 503b has just been discovered

About twice the size of Earth, 503b orbits its own star every six days. 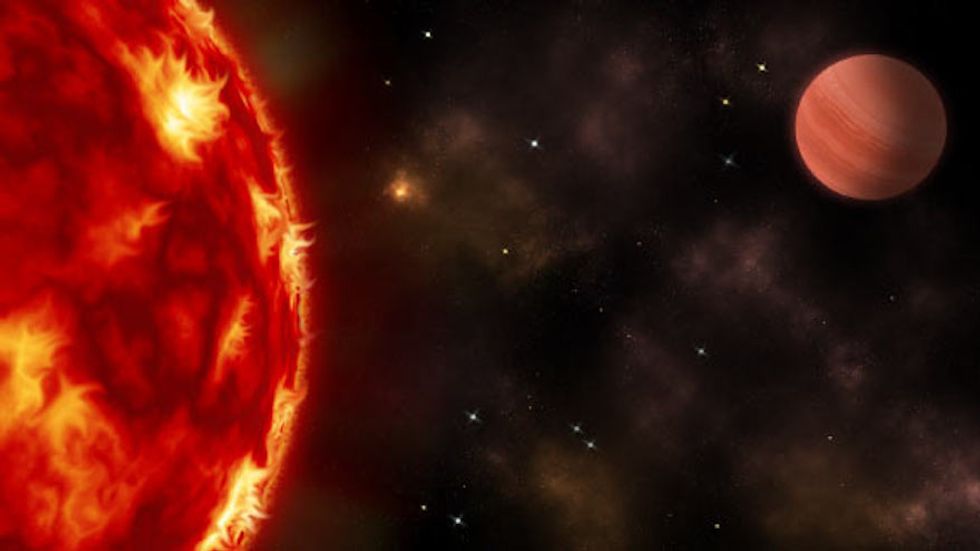 Artist’s impression of the exoplanet Wolf 503b and its host star. Image credit: Sci-News.com.

Scientists using data from NASA's Kepler Space Telescope, which has recently awoken from a slumber meant to conserve precious fuel, have found Wolf 503b, an exoplanet about twice the size of our own Earth — a mere 145 light years away, in the Virgo constellation.

The team involved includes Canadian, American, and German researchers. The lead author of the study is Merrin Peterson, a graduate student at the Institute for Research on Exoplanets.

Size comparison: Earth, Wolf 503b, and Neptune. The color blue for Wolf 503b is imaginary; nothing is yet known about the atmosphere and surface of the planet. Credit: NASA Goddard/Robert Simmon (Earth), NASA / JPL (Neptune).

"The discovery and confirmation of this new exoplanet was very rapid, thanks to the collaboration that I and my advisor, Björn Benneke, are a part of," Peterson said. "In May, when the latest release of Kepler K2 data came in, we quickly ran a program that allowed us to find as many interesting candidate exoplanets as possible. Wolf 503b was one of them."

The planet was found by observing the changes in the light that the dwarf star (named, of course, Wolf 503) exhibits as the planet crosses in front of it; since Wolf 503b orbits its sun every six days, and is approximately 10x closer to its sun than our planet Mercury is ours, the effect it creates on the light from this star is readily seen by a telescope of Kepler's capability.

It's precisely because of Kepler that we know this: Most of the planets in our galaxy that orbit close to their stars like 503b does are usually between Earth and Neptune in size.

Artist's impression of the exoplanet Wolf 503b and its host star. Image credit: Sci-News.com

We have nothing like 503b in our solar system, so it's a rare opportunity to study such a planet, and potentially figure out if those kinds of planetary bodies are likely to be rocky and Earth-like, or more gaseous, like Neptune. Because the star that 503b revolves around is relatively close to us, it's very bright; this will allow more detailed study and inferences about its density and mass.

If indications are that it's a higher-mass planet, after calculating its radius using similar light-bending telescopic data, this will provide researchers an approximate density of the planet, which will inform them as to its composition. In other words, a more dense, higher-mass planet would likely be rocky like Earth, and a much less dense and more gaseous composition would put 503b into a Neptunian category.

As Kepler reaches the end of its effective life cycle, a new telescope, the James Webb Space Telescope (JWST), is launching in early 2021 to replace both it and, after working alongside it for a while, Hubbel; it will be better able to study planets such as 503B, including chemical composition such as hydrogen and water.

“The brightness of the host star makes Wolf 503b a prime target for prompt radial velocity follow-up, Hubble Space Telescope transit spectroscopy, as well as detailed atmospheric characterization with JWST," the astronomers said.

Speaking of the JWST, here are the top 5 things about it: