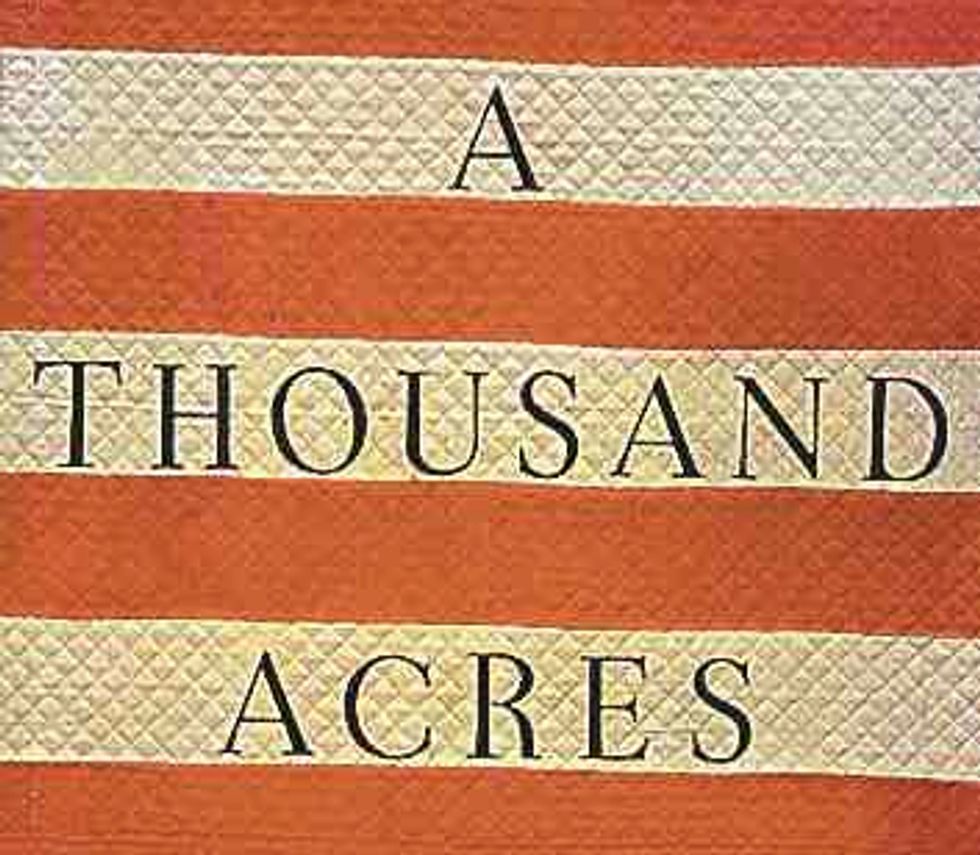 Earlier this year, novelist Jane Smiley contributed an entertaining and provocative piece to Big Think’s “How to Think Like Shakespeare” series. In it she wrote that while composing A Thousand Acres, her 1991 Pulitzer winner, she caught a glimpse into the mind of Shakespeare—and found it less godlike than many would imagine. The article struck me as a good excuse to revisit the book, which turns twenty years old this year.

A Thousand Acres is a “classic novel” in at least one sense: it’s carefully crafted, traditional realist fiction of a very high order. It’s a model novel, the kind that should be, and is, studied in MFA fiction programs; in fact, its author is herself a product of the famous workshop at Iowa University. Calling it “an Iowa novel” might make a clever left-handed compliment—the setting is a farm town in that state—but not a fair one, since the book transcends the glibly competent or formulaic. Its best characters break through to a life of their own, and its often explosive themes are handled with impressive restraint. The prose is expertly carpentered and consistent in its refusal to call attention to itself. A few pages before the end, the narrator opens a jar of pickled sausages and reports: “A strong sour odor of vinegar bellied out.” That Smiley is still working this hard, this late in the book, to come up with the perfect verb is a testament to her craft.

Whether the book is a classic novel in the larger sense is a tough question. I think it will remain permanently worth reading and discussing—and maybe that’s all that phrase means—but I also think certain key flaws land it shy of true greatness. The story is a reworking of the King Lear plot, with a few major differences from Shakespeare's version: it's told from the perspective of Goneril (or her equivalent, Ginny); there’s a notable lack of any equivalent for the Fool, and thus an occasional shortage of comic perspective; and most importantly, the father Larry is a far more unadulterated villain than Shakespeare’s Lear.

Larry is one mean cuss: drunk, stubborn, hotheaded, tightfisted, senile, and, as we increasingly discover, abusive. Smiley has suggested that this is a fair turnabout, since Shakespeare portrays his Goneril and Regan as villains from the start. She explains:

Whereas in “Measure for Measure,” fairness won out, and the hypocritical tyrant was revealed and punished, in “King Lear,” tyranny went unexplored. In fact, tyranny seemed to be embraced, and for no reason that I could discern. Was I supposed to pity Lear because he was a father? Because he was the king? Because he was foolish and/or senile? In “Measure for Measure,” the female characters were appealing in their intelligence; I didn’t understand the female characters in “King Lear” at all. So I set about correcting my friend William Shakespeare—something no sane adult would attempt. I gave the royal family a background and a milieu. I gave the daughters a rationale for their apparently cruel behavior…

One problem with this switch is that Goneril and Regan have much smaller roles in Shakespeare’s play than Larry does in the novel. It’s easier to get away with a bit of flatness in secondary characters than in primary ones. Then too, Smiley has mentioned elsewhere that the starting point for her novel was the scene in which Goneril and Regan discuss their father in private, affording us a more human perspective on these “evil” sisters. By failing to introduce similar ambiguities into Larry’s character—while still positioning him at the center of the conflict—Smiley robs her drama of part of its force.

I’m not persuaded, either, by Smiley’s argument that “tyranny [goes] unexplored” in Lear, or that Shakespeare “took for granted Lear’s claims as a king and a man.” To me the power of Lear lies in showing how flimsy those claims are, and how rapidly they can disintegrate. Lear’s tyrannical commands in the first scene (the infamous “love test”) prove disastrous, while his misogynistic rants (“Down from the waist they are centaurs, / Though women all above”) are clearly shown to be the product of impotent fury and an increasingly unstable mind. Villains though they are, Regan and Goneril give an astute, eloquent indictment of their father:

REGAN. 'Tis the infirmity of his age: yet he hath ever but slenderly known himself.

GONERIL. The best and soundest of his time hath been but rash.

To answer Smiley’s rhetorical question, I think we’re supposed to condemn and pity Lear for this rashness. Condemn, because it does so much harm; pity, because male or female, most of us eventually find out that we’ve known ourselves “but slenderly” as well.

As a literary corrective, then, A Thousand Acres fixes what ain’t broke. By taking Lear down a peg it repeats, with diminishing returns, what the play already does. Yet when judged on its own terms the novel has many strengths—strengths that a more reverent attitude toward Lear would likely have diminished. Pitting yourself against Shakespeare is the best way to get burned as an author; Smiley, to her credit, only gets singed.

In particular, I admire the way Smiley draws her plot threads together to weave an ending that is convincingly tragic. The last quarter of the novel becomes a case study in jealousy and erotic despair, as Ginny grieves for the loss of her only hope for love. (Under what circumstances I won’t say, but anyone familiar with Lear will be able to predict this plot twist early in the book.) Movingly, she is not only broken but trapped: she has no opportunities for renewed human connection, and worse, no dignity in her suffering (she does something unforgivable during the first shock of heartbreak). Her only option is survival, her only goal continued sanity. In this way she’s as much an analogue for Lear’s Edgar as for Goneril—and I suspect that, as a subtler reader of Shakespeare than her criticism sometimes suggests, that’s exactly what Smiley had in mind.