Does your ego serve you, or do you serve it? What Buddhism and Freud say about self-slavery

"Buddhist psychology and Western psychotherapy both hold out hope for a more flexible ego, one that does not pit the individual against everyone else in a futile attempt to gain total surety." 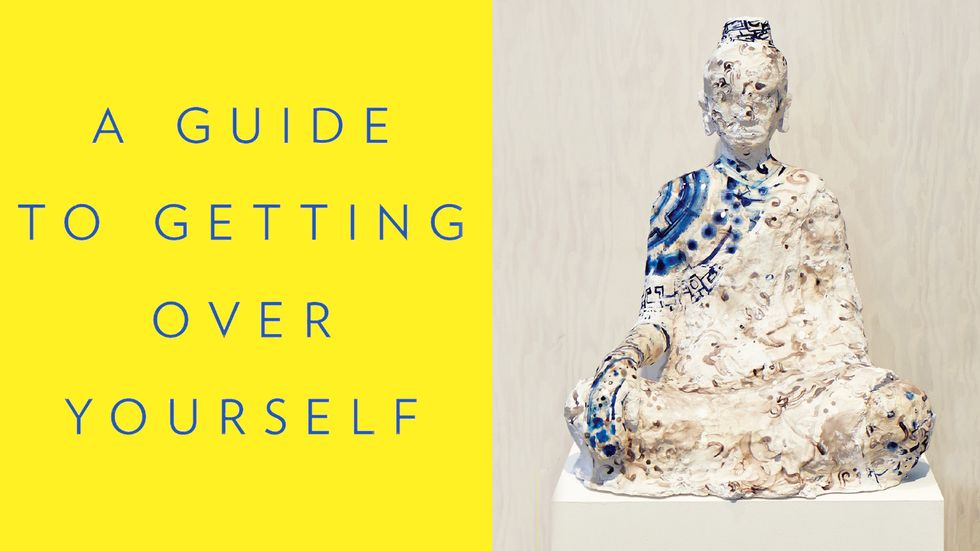 Advice Not Given, by Mark Epstein

Ego is the one affliction we all have in common. Because of our understandable efforts to be bigger, better, smarter, stronger, richer, or more attractive, we are shadowed by a nagging sense of weariness and self-doubt. Our very efforts at self-improvement orient us in an unsustainable direction since we can never be certain whether we have achieved enough. We want our lives to be better but we are hamstrung in our approach. Disappointment is the inevitable consequence of endless ambition, and bitterness a common refrain when things do not work out. Dreams are a good window into this. They hurl us into situations in which we feel stuck, exposed, embarrassed, or humiliated, feelings we do our best to keep at bay during our waking hours. Our disturbing dreams are trying to tell us something, however. The ego is not an innocent bystander. While it claims to have our own best interests at heart, in its relentless pursuit of attention and power it undermines the very goals it sets out to achieve. The ego needs our help. If we want a more satisfying existence, we have to teach it to loosen its grip.

There are many things in life we can do nothing about—the circumstances of our childhoods; natural events in the outer world; the chaos and catastrophe of illness, accident, loss, and abuse—but there is one thing we can change. How we interact with our own egos is up to us. We get very little help with this in life. No one really teaches us how to be with ourselves in a constructive way. There is a lot of encouragement in our culture for developing a stronger sense of self. Self-love, self-esteem, self-confidence, and the ability to aggressively get one’s needs met are all goals that most people subscribe to. As important as these accomplishments may be, however, they are not enough to guarantee well-being. People with a strong sense of self still suffer. They may look like they have it all together, but they cannot relax without drinking or taking drugs. They cannot unwind, give affection, improvise, create, or sympathize with others if they are steadfastly focused only on themselves. Simply building up the ego leaves a person stranded. The most important events in our lives, from falling in love to giving birth to facing death, all require the ego to let go. This is not something the ego knows how to do. If it had a mind of its own, it would not see this as its mission. But there is no reason for the untutored ego to hold sway over our lives, no reason for a permanently selfish agenda to be our bottom line. The very ego whose fears and attachments drive us is also capable of a profound and far-reaching development. We have the capacity, as conscious and self-reflecting individuals, to talk back to the ego. Instead of focusing solely on success in the external world, we can direct ourselves to the internal one. There is much self-esteem to be gained from learning how and when to surrender.

While our culture does not generally support the conscious de-escalation of the ego, there are silent advocates for it in our midst. Buddhist psychology and Western psychotherapy both hold out hope for a more flexible ego, one that does not pit the individual against everyone else in a futile attempt to gain total surety. These two traditions developed in completely different times and places and, until relatively recently, had nothing to do with each other. But the originators of each tradition—Siddhartha Gautama, the South Asian prince who renounced his luxurious lifestyle to seek an escape from the indignities of old age, illness, and death; and Sigmund Freud, the Viennese doctor whose interpretation of his own dreams set him on a path to illuminate the dark undercurrents of the human psyche—both identified the untrammeled ego as the limiting factor in our well-being. As different as these two individuals were, they came to a virtually identical conclusion. When we let the ego have free rein, we suffer. But when it learns to let go, we are free.

Detail of 'Head of the Buddha' on display at the Victoria and Albert Museum on October 16, 2016 in London, Great Britain, United Kingdom. (Waring Abbott/Getty Images)

Neither Buddhism nor psychotherapy seeks to eradicate the ego. To do so would render us either helpless or psychotic. We need our egos to navigate the world, to regulate our instincts, to exercise our executive function, and to mediate the conflicting demands of self and other. The therapeutic practices of both Buddhism and psychotherapy are often used to build up the ego in just these ways. When someone is depressed or suffers from low self-esteem because he or she has been mistreated, for example, therapy must focus on repairing a battered ego. Similarly, many people have embraced the meditation practices of the East to help build up their self-confidence. Focus and concentration diminish stress and anxiety and help people adapt to challenging home and work environments. Meditation has found a place in hospitals, on Wall Street, in the armed forces, and in sports arenas, and much of its benefit lies in the ego strength it confers by giving people more control over their minds and bodies. The ego-enhancing aspects of both of these approaches are not to be minimized. But ego enhancement, by itself, can get us only so far. Both Western psychotherapy and Buddhism seek to empower the observing “I” over the unbridled “me.” They aim to rebalance the ego, diminishing self-centeredness by encouraging self-reflection. They do this in different, although related, ways and with different, although related, visions. For Freud, free association and the analysis of dreams were the primary methods. By having his patients lie prone and stare into space while saying whatever came to mind, he shifted the usual equilibrium of the ego toward the subjective. Although few people lie on the couch anymore, this kind of self-reflection remains one of the most therapeutic aspects of psychotherapy. People learn to make room for themselves, to be with uncomfortable emotional experiences, in a more accepting way. They learn to make sense of their internal conflicts and unconscious motivations, to relax against the strain of the ego’s perfectionism.

Buddhism counsels something similar. Although its central premise is that suffering is an inextricable aspect of life, it is actually a cheerful religion. Its meditations are designed to teach people to watch their own minds without necessarily believing everything they think. Mindfulness, the ability to be with whatever is happening in a moment-to-moment way, helps one not be victimized by one’s most selfish impulses. Meditators are trained to not push away the unpleasant nor cling to the pleasant but to make room for whatever arises. Impulsive reactions, in the form of likes and dislikes, are given the same kind of attention as everything else, so that people learn to dwell more consistently in their observing awareness, just as one does in classic modes of therapy. This observing awareness is an impersonal part of the ego, unconditioned by one’s usual needs and expectations. Mindfulness pulls one away from the immature ego’s insistent self-concern, and in the process it enhances one’s equilibrium in the face of incessant change. This turns out to be enormously helpful in dealing with the many indignities life throws at us.

While the two approaches are very similar, the primary areas of concern turned out to be different. Freud became interested in the roiling instincts and passions that rise to the surface when the ego is put under observation. He saw himself as a conjuror of the unconscious, an illuminator of the dark undercurrents of human behavior. When not prompted, people reveal themselves, often to their own surprise, and what they discover, while not always pretty, gives them a deeper and richer appreciation of themselves. Out of the dark earth, after a night’s rain, flowers grow. Freud took delight in poking fun at the belief that we are masters in our own houses, comparing his discoveries to those of Copernicus, who insisted that the sun does not revolve around the earth, and Darwin, who claimed that man “bears in his bodily frame the indelible stamp of his lowly origin.” For Freud, the ego could evolve only by giving up its ambitions of mastery. The ego he encouraged was a humbled one, wider in scope but aware of its own limitations, not driven so much by instinctual cravings but able to use its energies creatively and for the benefit of others.

While maintaining a similar reliance on self-observation, Buddhism has a different focus. It seeks to give people a taste of pure awareness. Its meditation practices, like those of therapy, are built on the split between subject and object. But rather than finding uncovered instincts to be the most illuminating, Buddhism finds inspiration in the phenomenon of consciousness itself. Mindfulness holds up a mirror to all the activity of mind and body. This image of the mirror is central to Buddhist thought. A mirror reflects things without distortion. Our consciousness is like that mirror. It reflects things just as they are. In most people’s lives, this is taken for granted; no special attention is given to this mysterious occurrence. But mindfulness takes this knowing consciousness as its most compelling object. The bell is ringing. I hear it and on top of that I know that “I” am hearing it and, when mindful, I might even know that I know that I am hearing it. But once in a while in deep meditation, this whole thing collapses and all that is left is one’s mirrorlike knowing. No “I,” no “me,” just pure subjective awareness. The bell, the sound, that’s it! It is very hard to talk about, but when it happens the freedom from one’s usual identity comes as a relief. The contrast with one’s habitual ego-driven state is overwhelming, and much of the Buddhist tradition is designed to help consolidate the perspective of this “Great Perfect Mirror Wisdom” with one’s day-to-day personality.