TOKYO – One of the most controversial of all world rankings is the annual ‘World University Rankings of the Times Higher Education’ –some say a rather biased and telling indictment of US-Anglo-Saxon world supremacy and its alleged intellectual and cultural superiority (they claim they suck in the globe’s best and brightest).

Instead of having all countries attend as they do in any other global event such as the FIFA World Soccer Cup, the Olympic Games, the US and its ally Great Britain simply bake the winner’s cake and eat it, while the rest of the world gets nomnoming on kummelweck.

RELATED The Resurrection of Non-Western Civilizations

Imagine we organized a Miss World contest with 7 out of the top 10 winners to be American. Everyone else would call this out to be racist joke, a rigged travesty, and rightly feel offended. So why does humanity even consider letting the US (and its ally Britain) stage a dubious ranking in which they occupy 17 of the top 20 slots? Any nation with any self-respect should boycott this. Instead, we should work out a ranking system that dignifies and celebrates all nations and cultures –not devalues them.

RELATED When Predicting the Future of Nations Goes Terribly Wrong

We want to rank you!

Fair and inspiring world universities rankings are entirely possible, but they may not be in US interest. Take ‘culture’ for example: If one were to study anything related to Germany, France, or India, say, then obviously the best schools will always be German, French, or Indian ones, no? Did you know that before the US hegemony was felt on the planet, Germany lacked any concept of ‘elite universities’? All universities in Germany were equals. Berlin had to invent a so-called excellent initiative (from 2007 onward) because the Anglo-Saxon world order coerced all nations into total Americanization, including nominating its own group of ivory towers. After having steamrolled global education, abbreviated as ‘Westernization’, naturally it would result in the leadership of Western schools. Now, that’s a marketable New World Order. But how much of it is based in the reality of cultural diversity, multitude, and pluralism?

Indians and Chinese, too, are obsessed with ‘World University Rankings’ and, it needs to be said, suffer from the same inferior complex the French, Italians, Spain, Russian, and Polish now do in that their countries have been totally marginalized and humiliated by American culture.

South American or African schools don’t even seem to exist in education; letting alone Iranian or Middle Eastern ones. The US –with its military conquest of the planet and cultural imperialism- has extinguished their lights; and while other empires may have ruled no different, the US at least should have known better.

Each country is unique

Just take Europe as an example: Whether it is European history, art, culture, literature, or the languages –no US University should be good enough for any of this –at least if you believe in authenticity, intensity, and embrace life as the accumulation of personal experiences.

The same holds true for Americans searching knowledge about Asia. According to the World University Rankings, they would be better off staying home. The West is best even for Asia -that seems the message to all students, researchers, and professors in the world. It’s decisively fascist.

Now imagine that every nation could just send one contestant, or one contingent of contestants, and that economic power was the greatest measurement of a country’s vigilance, status, and its citizens’ intelligence and capability. Then, Britain would fall out of the top three, and we would get something like this [VIDEO] (stand 2010-2014):

RELATED World Community Agog Over China Overtaking US Economy in 2014

The NEW Top 3 Universities in the World 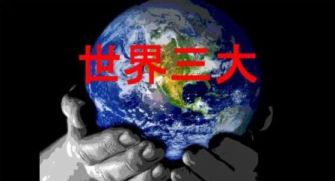 [Transcript] This video will discuss the ‘Top 3 Universities in the World’. The list is objective. It is based on economic strength, the national GDP of their host nations, and the fact that all three countries in this list for various reasons worship the concept of ‘elite’ and strongly support the ideas of educational hierarchy and university rankings at home.

The Top 3 Universities in the world are:

#3 The University of Tokyo, also known as ‘Todai’. Todai lies in the heart of the world’s largest city –Tokyo. Japan has the third largest economy in the world. The country also has one of the world’s most intelligent populations, averaging an IQ of 107.

#2 Peking University, also known as ‘Beida’. Beida lies in the northwestern district of Beijing, the capital of the second largest economy in the world. It is the crown jewel of the world’s next superpower. China also has the most competitive higher education system, a high national IQ, a Confucian love for learning, and a population of 1,388,000,000 people.

#1 Harvard University in Cambridge, Boston (MA), is a private institution for the elites of the United States of America. The USA is the largest economy in the world and today’s superpower. Harvard attracts powerful and influential decision makers from all over the world –or better: their sons and daughters.

All three universities are recognized as the top institutions in their respective country. And the three countries are the #1, #2, and #3 economies in the world. Prestige and social status comes naturally to those individuals who receive degrees from either one. Based on the criteria mentioned they are currently recognized as the top three leading universities of all time… Or, are they not?

Tell us what you think and subscribe to us. You are listening to WeToldYouSo1.

Can space ever be safe? What about the metaverse?
Up Next

Why you should be skeptical of a new study that concludes that when keeping promises, you should deliver the bare minimum

I was very surprised to see the following headline earlier today on a parenting website of all places: Just keep your promises: Going above and beyond does not pay off. […]