Update: Following the publication of this post and all of your thoughtful responses, the Big Think editors have decided to discontinue the Big Think’s relationship with Kanazawa.

This is a response to the recent writings of Big Think blogger Satoshi Kanazawa. Not only does Kanazawa baldly assert “correlation certainly does imply causation” – unquestioningly disregarding one of the greatest logical fallacies universally printed in science textbooks, but according to him, “real scientists never utter the phrase”. In this post I’ll explain why Kanazawa is both spectacularly wrong and arrogantly defamatory to scientists who make a valid and extremely important point. I can’t respond to Kanazawa on his own blog because he’s disabled comments, so I’ll debunk him here instead.

Kanazawa’s argument is a classic straw man. Kanazawa’s grand citation for his bizarre claim is a Slate column which in fact demonstrates a perfect case of correlation not implying causation: internet use correlating with depression. The Slate column even sums up with a reminder of why properly understanding the difference between correlation and causation is so important to understand:

“A false positive means approving drugs that have no effect, or imposing regulations that make no difference, or wasting money in schemes to limit unemployment. As science grows more powerful and government more technocratic, the stakes of correlation—of counterfeit relationships and bogus findings—grow ever larger. The false positive is now more onerous than it’s ever been. And all we have to fight it is a catchphrase.”

Kanazawa concludes his case by falling straight in to the trap himself, noting that based on Google book searches:

“Not only are people who say “Correlation does not imply causation” entirely ignorant of science, they… also appear to be very nasty people given to name calling…  The frequency of the phrase “Correlation does not imply causation” in books archived in Google Books has historically increased in tandem with the frequency of epithets like “douchebag” and “numbnuts.” 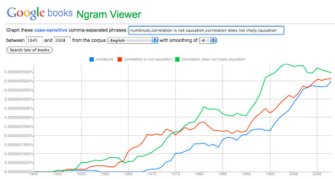 This is patently a painfully obvious demonstration of correlation not equalling causation. A child taking a cursory glance at Kanazawa’s graph above could tell you that, before laughing in your face. Just for fun I decided to test Kanazawa’s hypothesis myself. I looked at every use of the phrase “correlation does not imply causation” in the top hundred Google book results that I could access. I found many wonderful books by esteemed scientists, not once was the phrase followed or preceded by the words “numbnuts” or “douchebag”. Likewise when I looked at the top books containing the words “numbnuts” or “douchebag”, in no instance were these words used in the context of a debate on causality. I decided to take this a step further, of the 21,300 books containing the phrase “correlation does not imply causation” I found precisely zero books when adding the word “numbnuts” to my search.

This is a perfect example of illusory correlation and confirmation bias. Kanazawa searched to find a correlation that would support his argument and he found it. He didn’t present any more data for comparison, he didn’t even take the most cursory steps to verify the supposed link.  The phrases “correlation does not imply causation”, “numbnuts” and “douchebag” do indeed all appear in books with increasing frequency over the past hundred years. Crucially though, they do not however appear in the same books, as Kanazawa hypothesised.

At this point, again purely for fun I tossed the above phrases in to Google Correlate, a tool for looking at correlations in search patterns. The phrase “correlation does not imply causation” wasn’t frequently searched for enough for Google to find any correlations, ironically. “Douchebag” however, came up with results including “in a relationship”, “do girls like” and “how can you tell”, again no sign of discussion on causality but evidence of other variables that Kanazawa didn’t even consider might be a part of the equation.

Just to cement the point, I’ll now list some examples here of scientists demonstrating cases where “correlation does not imply causation”: 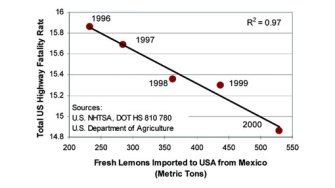 The rate of fresh lemons imported to the USA from Mexico correlates with a decrease in the US highway fatality rate (Journal of Chemical Information and Modeling). 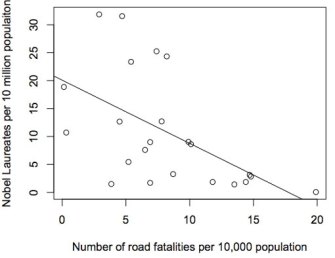 Coincidentally, the rate of road fatalities in a given country also correlates significantly with the rate of Nobel Laureates(PDF).. 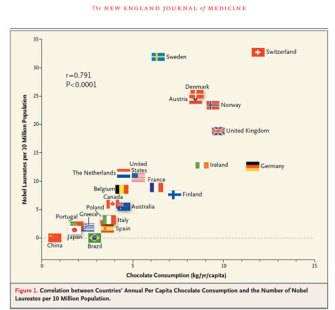 ..and incidentally a close correlation has been reported between Nobel Laureates and chocolate consumption (PDF).  It took Oxford University neuropsychologist Dorothy Bishop to adjust the data for the effect of spend per head on education, to demonstrate once again that this is likely a case of correlation not implying causation. She wasn’t the only one, it was also pointed out that chocolate consumption  also correlates with serial killers and rampage killers per capita… 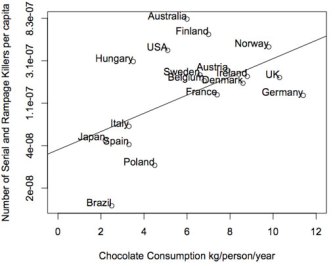 The research above wasn’t reported critically everywhere as Kanazawa might have you believe. Outside the small world of science blogging, as Cindy Merrick reported for Stats.com, the newspapers fell for the story hook line and sinker:

“Most coverage (Washington Post, Huffington Post, New York Daily News, USA Today) seems to have cut-and-pasted from an Associated Press story which, despite a bit of gleeful amusement (ain’t science grand?), swallows Messerli’s article as if auditioning for the gluttonous role of Augustus Gloop in Willy Wonka.”

As Kanazawa should know full well, the fallacy of correlation implying causation is an immense problem in the social sciences, where causation is so difficult to pin down. By now you’ll probably have seen dozens of articles in places such as The Daily Mail churning out the claim that “oral sex helps women fight depression”. The report is based on a 2002 study (that didn’t even look at oral sex) which found that sex without condoms was inversely correlated with depression. The papers parroted the line that semen is an antidepressant with no one in the media considering the patently obvious confounding explanations.

I’ve chosen these examples because they are humorous, but countless recent scientific discussions in which correlation is mistaken for implying causation have had huge impacts such as in the case of vaccine denialism.

I don’t like to introduce ad hom attacks in my critiques but today I’m going to make an exception. The gross errors of reasoning that Kanazawa makes, represent a fundamental misunderstanding of what science is and how science works. But this is not Kanazawa’s only crime, Kanazawa masquarades hate as science. A whistlestop tour of Kanazawa’s hate fueled nonsense is provided in Jezebel’s account of The Illustrious Career Of A Crap Psychologist, also find debunkings of Kanazawa’s previous works at Science Blogs, Scientific American and Rational Wiki. I’m frankly embarrassed to be blogging alongside Kanazawa, I think he is singlehandedly dragging the Big Think name through the dirt. If you aren’t aware, Kanazawa was banned for a year from publishing in non peer reviewed journals by his university (LSE) for his blog posts on race. LSE stated that Kanazawa’s “arguments used in the publication were flawed and not supported by evidence”. A group of 68 evolutionary psychologists issued an open letter titled “Kanazawa’s bad science does not represent evolutionary psychology”, stating “not only is Kanazawa’s work an example of poor science on theoretical and methodological grounds in our view, but we also believe it violates the central purpose of scientific discourse, because he rarely engages with his scientific critics”. I believe it is outrageous under these circumstances that after being booted from Psychology Today, not only has Kanazawa been allowed (and in my view effectively promoted) to continue on his express train to cloud cuckoo land here at the Big Think but he has even been allowed to silence the tidal wave of criticism by turning off comments on his blog.

I’m not even the first to say this here at the Big Think. Adam Lee previously called for Kanazawa’s departure describing him as a “racist, sexist, genocide-advocating pseudoscientific bigot”. Now we really can well and truly add bad science to the charge sheet. His position has been defended however by the Big Think Editors on the basis that “Satoshi has made us think more than most” and that “he doesn’t posture or hedge to insulate himself from attack”. Now that this has clearly been disproven and now that we can’t debunk him (through comments on his blog) without actively promoting him (through blog posts such as this), I think it may be time to reconsider this position.

From politics to culture, we blame “tribalism” for humanity’s problems. This explanation is entirely wrong.
Up Next
Technology & Innovation

The Danger of Free Google Software

Without paying money for goods and services, customers have little recourse when a company decides to radically change its game plan. Is your data in danger of disappearing?