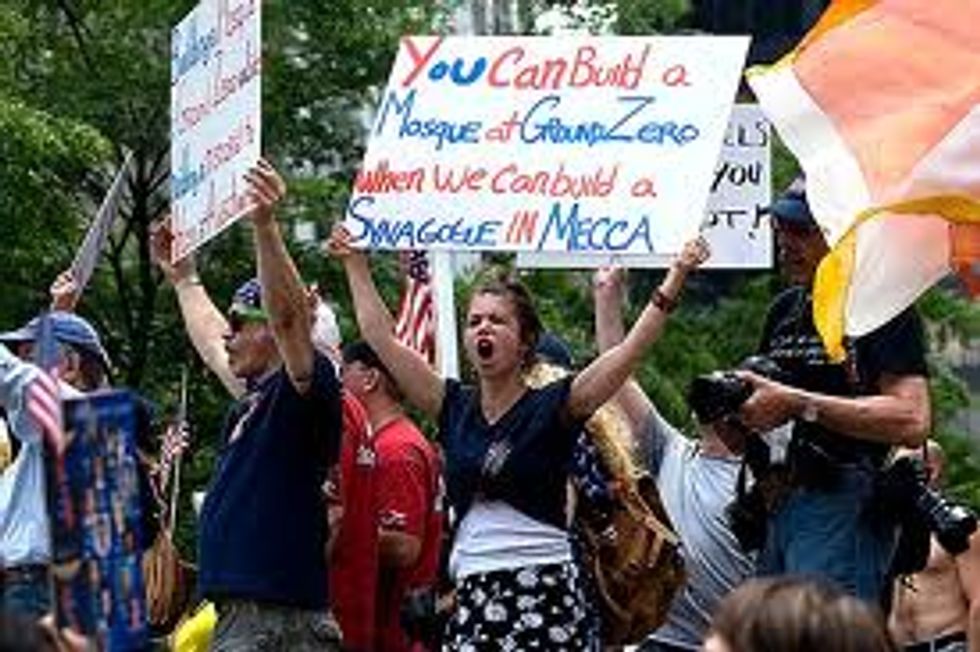 Do some Americans have an irrational and prejudicial fear of Islam? Where do views of Muslims stand more generally? That was the focus of the cover story last week at Time magazine. "Islamophobia in the U.S. doesn't approach levels seen in other countries where Muslims are in a minority," wrote Time senior editor Bobby Ghosh. "But to be a Muslim in America now is to endure slings and arrows against your faith — not just in the schoolyard and the office but also outside your place of worship and in the public square, where some of the country's most powerful mainstream religious and political leaders unthinkingly (or worse, deliberately) conflate Islam with terrorism and savagery."

In addition, according to Pew's most recent survey, 38% of Americans have a unfavorable opinion of Islam, compared to just 30% who hold a favorable view, and 32% who say they don't know.

Among the more than a third of Americans who hold an unfavorable view of Islam, what accounts for the most extreme perceptions among this group? For the other quarter to one third of Americans who voice uncertainty on the topic, what might be contributing to their ambivalence?  And importantly, what initiatives and strategies are likely to be successful at engaging this ambivalent middle?

For answers, I turned to my brother Erik C. Nisbet, a professor in the School of Communication at The Ohio State University.  Erik is one of a growing number of social scientists studying the factors that contribute to Islamophobia in America and that shape perceptions of Muslims more generally.

As Erik prepares a new national survey this fall on the topic, I interviewed him about the nature of Islamophobia, about its causes, and about strategies for engaging the middle segment of Americans who have yet to form strong judgments about Islam.  The first part of the interview appears today.--Matthew Nisbet

What is Islamophobia? Where does the term come from?

The term "Islamophobia" has been applied to many different contexts and situations over the last 30 years.  It literally means an "irrational fear" of Islam and Muslims. In Europe during the late 1980s and 1990s the term was prominently applied to the public backlash against Muslim immigration from countries like Turkey, Algeria, Pakistan, etc. However, since September 11th it has been also commonly used to describe prejudice and fears about Islam in the United States.  Islamophobia is typically expressed as religious, political, social, and economic intolerance toward Muslims or closely identified ethnic groups (i.e. Arabs), the support and advocacy for restrictions on Muslim rights and civil liberties,  psychological or physical violence, and extreme rhetoric.

There is no single, commonly agreed or formal definition of Islamophobia in academic or policy circles.  A British report by the Runnymede Trust in the late 1990s attempted to lay out a comprehensive picture of Islamophobia and noted a key aspect was whether individuals had a closed, monolithic view or an open, diverse view of Islam.

However, if you examine the range of research on Islamophobia, and draw upon the comparative academic scholarship on anti-Americanism, some key attributes emerge.  First, Islamophobia is not merely having an unfavorable view or dislike for Islam or Muslims.  It is a necessary condition, but is not sufficient.   Thus, individuals may have an unfavorable view or dislike of Islam but still remain tolerant and respectful of Islam and Muslims.

Third, apart from fears and prejudice based on the perceived material or physical threat posed by Islam, the collective "symbolic" threat Islam poses toward a group's values, culture, beliefs, and traditions is often the more prominent driver of Islamophobia.

Lastly, Islamophobia can be best viewed conceptually as a persistent, universally applied interpretative and emotional schema about Islam that shapes public perceptions and opinion.   A schema is the metaphorical term for an inferred system of related ideas about a concept or issue.  Activated by political messages and news coverage, schema provide short cuts for reaching an opinion about a complex topic such as Islam, serve as a basis for inference. Across countries, just as there are many different types and flavors of "anti-Americanism” that serve as schema for organizing perceptions of the United States, the same can be argued  about Islamophobia among Americans.

What are the factors that contribute to Islamophobia?

However, in the U.S. where the estimated Muslim population is below 2% of the total population, Islamophobia is more often driven by the media and cues from political or religious elites, what scholars call “mediated intergroup contact.”

Brigitte L. Nacos and Oscar Torres-Reyna’s Fueling Our Fears: Stereotyping, Media Coverage, Public Opinion of Muslim Americans provides a good overview of some of the trends in media coverage and public discourse about Islam in the United States following the September 11th attacks.  They find that though elite discourse and media coverage were mostly positive in the year following 9/11, since then elite claims and news portrayals have turned in the opposite direction, emphasizing negative portrayals and stereotypes.

Unfortunately, more focused research on the social-psychological foundations of Islamophobia remains somewhat scant (though a gap I am attempting to correct).  In one recent analysis of available polling data (published as a chapter in Muslims in Western Politics), we find that Christian religiosity, conservative political views, reliance on TV news, fear of terrorist attack, threat perceptions, and negative stereotypes are all significant predictors of Islamphobic orientations.  In contrast, education and factual knowledge about Islam reduce Islamophobic attitudes.

A follow-up analysis of national survey data from 2006 confirms the aforementioned predictors, but also looks more closely at the role of social identity.  Not surprisingly, perceived social distance—or how dissimilar in values and identity an individual perceives Muslims—is a strong predictor of Islamophobic attitudes.  But more importantly, this tendency to view Muslims as the “other” is strongly associated with the strength of an individual's self-identity as a Christian.  Also of interest, the strength of Christian identity tends to reduce the positive influence of knowledge about Islam and Muslims.  The implication is that among strong Christians, simply providing more information with the goal of increasing knowledge is unlikely to reduce irrational fears about Islam.