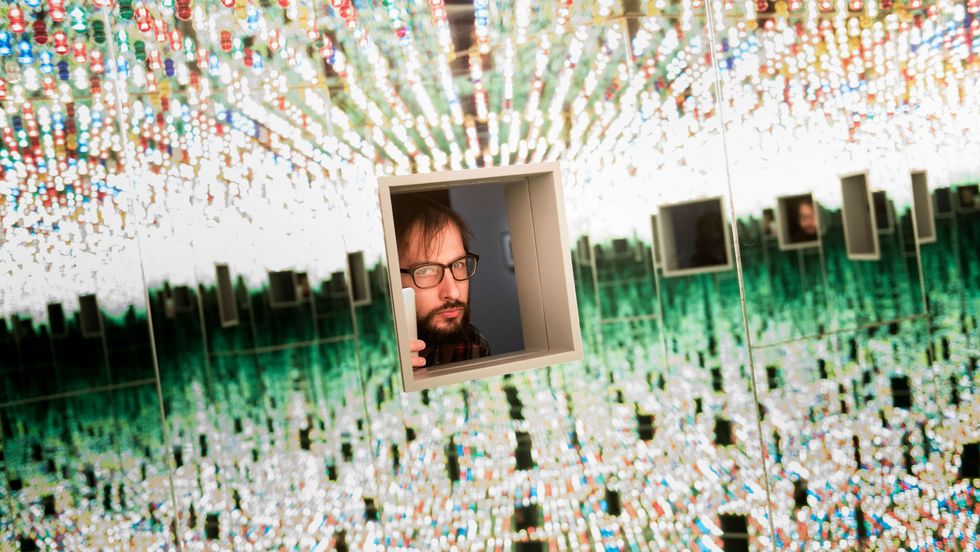 A man looks at the Love Forever room during a preview of the Yayoi Kusama's Infinity Mirrors exhibit at the Hirshhorn Museum in Washington, DC. (Photo credit: BRENDAN SMIALOWSKI/AFP/Getty Images)

There is a phrase you are as likely to find in a serious philosophy text as you are in the wackiest self-help book: ‘Know thyself!’ The phrase has serious philosophical pedigree: by Socrates’ time, it was more or less received wisdom (apparently chiselled into the forecourt of the Temple of Apollo at Delphi) though a form of the phrase reaches back to Ancient Egypt. And ever since, the majority of philosophers have had something to say about it.

But ‘Know thyself!’ also has self-help appeal. Is your aim to accept yourself? Well, you need to know thyself for that first. Or is it to make good decisions – decisions that are right for you? Again, this would be difficult unless you knew thyself. The problem is that none of this is based on a realistic picture of the self and of how we make decisions. This whole ‘knowing thyself’ business is not as simple as it seems. In fact, it might be a serious philosophical muddle – not to say bad advice.

Let’s take an everyday example. You go to the local cafe and order an espresso. Why? Just a momentary whim? Trying something new? Maybe you know that the owner is Italian and she would judge you if you ordered a cappuccino after 11am? Or are you just an espresso kind of person?

I suspect that the last of these options best reflects your choices. You do much of what you do because you think it meshes with the kind of person you think you are. You order eggs Benedict because you’re an eggs Benedict kind of person. It’s part of who you are. And this goes for many of our daily choices. You go to the philosophy section of the bookshop and the fair-trade section at the grocer’s shop because you are a philosopher who cares about global justice, and that’s what philosophers who care about global justice do.

There is, however, a deep problem with this mental set-up: people change. There are tumultuous periods when we change drastically – in times of romantic love, say, or divorce, or having children. Often we are aware of these changes. After you’ve had kids, you probably notice that you’ve suddenly become a morning person.

The problem is this: if we change while our self-image remains the same, then there will be a deep abyss between who we are and who we think we are. And this leads to conflict.

To make things worse, we are exceptionally good at dismissing even the possibility that we might change. Psychologists have given this phenomenon a fancy name: ‘The End of History Illusion’. We all think that who we are now is the finished product: we will be the same in five, 10, 20 years. But, as these psychologists found, this is completely delusional – our preferences and values will be very different already in the not-so-distant future.

Why is this such a big issue? It might be okay when it comes to ordering the espresso. Maybe you now slightly prefer cappuccino, but you think of yourself as an espresso kind of person, so you keep ordering espresso. So you’re enjoying your morning drink a little bit less – not such a big deal.

But what is true of espresso is true of other preferences and values in life. Maybe you used to genuinely enjoy doing philosophy, but you no longer do. But as being a philosopher is such a stable feature of your self-image, you keep doing it. There is a huge difference between what you like and what you do. What you do is dictated not by what you like, but by what kind of person you think you are.

The real harm of this situation is not only that you spend much of your time doing something that you don’t particularly like (and often positively dislike). Instead, it is that the human mind does not like blatant contradictions of this kind. It does its best to hide this contradiction: a phenomenon known as cognitive dissonance.

Hiding a gaping contradiction between what we like and what we do takes significant mental effort and this leaves little energy to do anything else. And if you have little mental energy left, it is so much more difficult to switch off the TV or to resist spending half an hour looking at Facebook or Instagram. Knowing thyself is an obstacle to acknowledging and making peace with constantly changing values. If you know thyself to be such-and-such a kind of person, this limits your freedom considerably. You might have been the one who chose to be an espresso person or a donating-to-charity person but, once these features are built into your self-image, you have very little say in what direction your life is going. Any change would be either censored or lead to cognitive dissonance. As André Gide wrote in Autumn Leaves (1950): ‘A caterpillar who seeks to know himself would never become a butterfly.’