While there are exciting possibilities of multiple dimensions offered by string theory, the world we inhabit appears to have three dimensions of space. But why not more?

A team of scientists proposed an unexpected theory about why we seem to have only three dimensions and why the universe inflated after the Big Bang. They think that shortly after the universe came into existence 13.8 billion years ago, it was filled with knots made from flux tubes – flexible strands of energy that bind together elementary particles.

Their insight comes from combining particles physics with mathematical knot theory, a unique approach the came as an inspiration to one of the team members.

The initial primordial soup, called the quark-gluon plasma, consisted of elementaryparticles called quarks, which make up protons and neutrons, and gluons, the particles that “glue” the quarks. Gluons connect quarks to corresponding antiquarks with flux tubes. 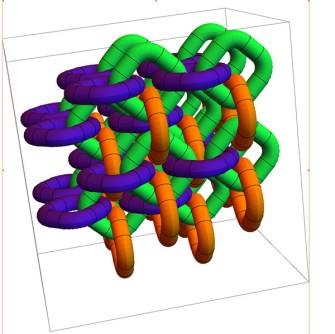 What the scientists theorize is that the primordial soup of the early universe would have had myriads of flux tubes being formed. While normally the flux tubes disappear whenquarks and antiquarks meet, they can continue to live if the tubes get intertwined and form a knot.

This is what happened in the high energy environment after the Big Bang, say the scientists. The whole universe was possibly filled with a network of flux tubes that were knotted together. This network would had the internal energy to drive cosmic inflation.

“Not only does our flux tube network provide the energy needed to drive inflation, it also explains why it stopped so abruptly,” said one of the study’s authors, Thomas Kephart of Vanderbilt University.“As the universe began expanding, the flux-tube network began decaying and eventually broke apart, eliminating the energy source that was powering the expansion.”

What the scientists think is that the resulting structure was the one that was stable, explaining why there are no more dimensions. If more were added, the stability of the process would disappear.

“Of all possible dimensionalities of space, our mechanism picks out three as the only number of dimensions that can inflate and thus become large,” the team wrote. “This model may explain why we live in three large spatial dimensions, since knotted/linked tubes are topologically unstable in higher-dimensional space-times.”

You can read their paper “Knotty inflation and the dimensionality of spacetime” here, in the European Physical Journal C.

When should we seek justice, and when should we forgive? A bishop explains.
▸
5 min
—
with
Bishop Barron
Up Next
Starts With A Bang

The Hubble Space Telescope Is Falling

The Hubble Space Telescope, as imaged during the last and final servicing mission. Image credit: NASA.And if we don’t prepare to catch it now, it’ll be too late.Since 1990, the Hubble Space […]