Is “Renoir” the Greatest Movie About Painting Ever? 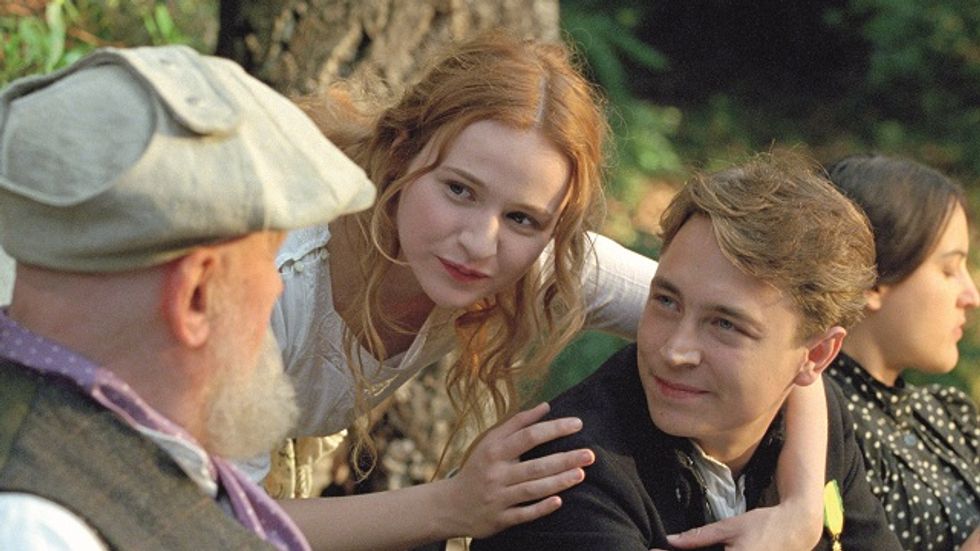 Few things are as painful to watch in movies as an activity you know and love being portrayed poorly. From the awkward baseball swings of athletically challenged actors to the magical creativity of thespian painters and sculptors, the typical bio-pic rankles with under-researched insensitivity to the hard work and dedication of the subject depicted. French director Gilles Bourdos’ film, Renoir (released in 2012 but only now showing in select theaters in the United States), breaks out of the bio-pic mold and forges a fascinating new way of showing an artist, in this case Pierre-Auguste Renoir, toiling at his trade in a realistic way that also conveys the aesthetic, spiritual dimension of the art. Lush, delicate, charming, and soulful, Renoir might be the greatest movie about painting ever.

Renoir begins in 1915 with a young girl riding a bike onto Renoir’s estate Collettes in Cagnes-sur-Mer on the French Riviera. Greeted by Renoir’s youngest son, Coco, the young woman, Andrée Heuschling, enters the Renoirs’ world just after Aline, the matriarch of the family, has passed away. “Deedee,” hired to model for Renoir by his late wife, poses for Renoir and soon revitalizes his art, leading to a late renaissance of nudes and landscapes of amazing virtuosity and life. When Renoir’s son Jean returns from the war to recover from near-mortal wounds, he, too, finds inspiration and rejuvenation through Deedee. The two young people become lovers and talk about their dreams for the future: hers to be a movie actress and his to emerge from his father’s shadow, perhaps as a director in the still-new medium of film. But will Jean’s sense of duty to return to the front and fight for his country jeopardize not only his life, but also his relationship with Deedee and his father’s renewal through this young muse?

Michel Bouquet plays Renoir beautifully. (Compare Bouquet’s performance with real-life footage of Renoir at work in Sacha Guitry’s short documentary, Ceux de Chez Nous [about 2 minutes].) Brusque one minute, tender the next, Bouquet’s Renoir refuses easy categorization, just like the real artist. The director, Bourdos, juxtaposes scenes of sun and greenery where Renoir paints joyfully with interiors and nightscapes when the artist’s crippling arthritis compel him to cry out at night and to have helpers, including Deedee, bathe the gnarled joints of his hands and knees.

Vincent Rottiers as Jean Renoir handsomely captures the dashing young soldier caught between two worlds—his father’s past world of painting and the new, uncertain realm of the silent film. Rottiers’ expressive face and subtle gestures allow him to bring great maturity to the life of young Jean, who represents that whole generation of European youth torn between the slaughterhouse of World War I and breaking free of all nationalism and tradition.

It is Christa Theret as Deedee, however, that steals the film. “Her skin soaks up the sun,” Renoir gushes early on over his young model. Theret soaks up this whole film, both with her skin in the nude scenes and in her radical exuberance in the midst of the tomblike, yet Edenic world of the Renoirs in 1915. The director actually asked the 21-year-old French actress (shown above, between Renoir père et fils) to gain weight for the role and make herself more Renoir-esque, if not Rubenesque. Yes, there are a great deal of nude scenes involving Theret in Renoir, but they never feel exploitative. “Flesh!” Renoir roars at Jean late in the film. “That’s all that matters… in life or painting.” Theret’s flesh embodies the spirit within her character, who longs to break out of the old ways and cut a new path for herself as a modern, sexually liberated woman. Theret’s Deedee refuses to fall into the standard muse model. As in real life, the relationship between Renoir and his last star model was reciprocal. She gave him a glimpse into the new world rising around him, full of new ideas and a new kind of woman. He gave her a glimpse into the world of true artistry, where hard work and commitment mean as much as vision and charisma.

It’s these scenes where Bourdos directs Renoir at work that set Renoir apart from previous films showing artists painting. Forget Kirk Douglas’ tortured, pious Vincent van Gogh in Lust for Life or John Malkovich’s oversexed, overpsychoanalyzed Gustav Klimt in Klimt. Bourdos began with two previous directors in mind: Maurice Pialat, “who absolutely refused to portray a painter in the act,” Bourdos explains, and Vincente Minnelli, “who straightforwardly directs the actual situations portrayed in paintings.” Avoiding those two extremes, Bourdos instead aims for a realism without straightforward documentation—painting without explicit reference to any one, specific painting. Renoir, thus, features an “ongoing discrepancy between the paintings that Auguste paints before the camera and his model,” Bourdos explains, “as if to underscore the artist’s part in reinterpreting what he sees.”

Bourdos actually employed a real-life art forger (Guy Ribes, literally fresh out of prison for art crimes, including faking Renoirs) to play Renoir’s “hand” painting as Bouquet provided Renoir’s voice. Ribes specialized not in copying existing works but rather in painting in the style of an acknowledged master—a level of interpretation in painting that Bourdos wanted for his depiction of Renoir. Ribes thus channels the spirit of Renoir as Theret channels the spirit of the model as challenging, inspiring muse to truly recreate what it would have been like to be there in the studio or out in the sunlight with Renoir in his sunset years. Add in Alexandre Desplat’s delicate, note-perfect soundtrack and Mark Lee Ping Bin’s heart-touching, soulful cinematography, and the sum effect are scenes that may be the closest ever to true artistic creation caught on film.

In one key scene, Jean prepares Renoir’s palette and asks his father if he wants black. “Renoirs refuse to paint the world black,” Renoir responds. “There are enough disagreeable things in life. I don’t need to create more.” Surrounded by death both large-scale and intimately close, Renoir refused to paint life black. Instead, through Deedee’s example, Renoir seized life ferociously until his death in 1919. I remember viewing the Late Renoir exhibit a few years ago (my review here) and coming away with an entirely new opinion not just of Renoir, but also of the role of art itself as a fountain of youth. Andrée Heuschling, who would go on to marry Jean and star in his earliest films as “Catherine Hessling,” served as a living fountain of youth for the three generations of Renoir men. See Renoir and drink from that same fountain of youth that is the real-life magic of human flesh, human interaction, and human spirit coming together in art.

[Many thanks to Samuel Goldwyn Films for providing me with the image above and other press materials related to Renoir, now showing in select theaters in the United States.]