More than just a pretty face, the Venus de Milo (rediscovered on this date in 1820) has changed ideas of female beauty ever since, often in surprising ways. 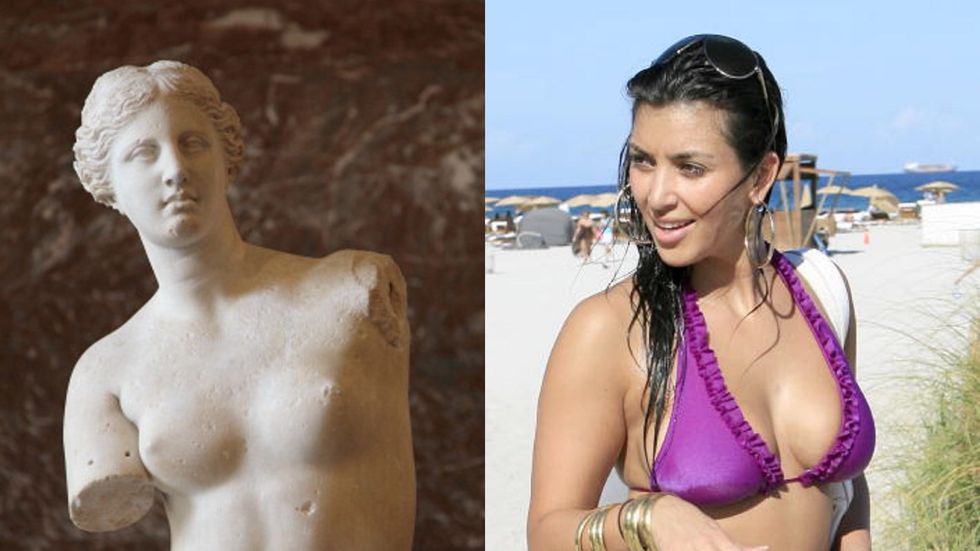 When Greek farmer Yorgos Kentrotas found some broken pieces of a statue buried in the ancient ruins on the island of Milos on April 8, 1820, he had no idea what he had found. Experts later identified the statue as depicting the Greek goddess of beauty, Aphrodite. Today, we know that statue better by the goddess' Roman name—Venus. The Venus de Milo quickly left Milos for Paris and the Louvre Museum, where it still resides today. That (re)discovery of the Venus de Milo—nearly two centuries ago now—changed the idea of female beauty in the 19th century and ever since, for better and worse. In the age of the selfie and its prime practitioner Kim Kardashian (above right), what does the Venus de Milo still say about female beauty?

We're used to the Venus de Milo disarmed, but scholars believe that the fully armed statue (shown in the video above) depicted the Greek myth of “The Judgment of Paris." Eris, goddess of discord, pouting over not being invited to a feast, crashed the party with a golden apple from the Garden of the Hesperides upon which was inscribed “for the fairest one." Goddesses Hera, Athena and Aphrodite all staked claims. Zeus, smelling trouble, refused to act as judge, declaring instead that the mortal Paris of Troy would do the job. All three goddesses tried to bribe the mortal judge, but Aphrodite's bribe—Helen, the most beautiful woman on Earth (and wife of Greek king Menelaus)—won. As Helen's face “launched a thousand ships" and set the Trojan War in motion, Aphrodite/Venus admired her prize, as shown in the Venus de Milo.

It's appropriate that the Venus de Milo depicts the results of a beauty contest, because it's launched a beauty contest ever since in Western Civilization. From the beginnings of Greek art, male nudity was as common due in large part to men frequently being seen nude in athletic competitions. Female nudity, however, remained under wraps for centuries. The Nike of Samothrace, another Louvre landmark, shows Greek art hinting at the female form through wet, clinging drapery—the ancient equivalent of a wet t-shirt contest. Not until 350 BC did Praxiteles sculpt female goddesses. The Venus de Milo comes after Praxiteles' breakthrough, but still clings to the wet t-shirt days with her covered lower half.

Why wait so long to unveil the female nude? The Greek even coined a word, “kaloskagathos," for how good looks equaled a good person, so showing off what you had was just part of being a good person, at least if you were a man. Greek author Hesiod called the first woman “kalon kakon" or “a beautiful-evil thing." The Greek double standard lets you look upon male nudes risk free, but, as anyone who's read Greek mythology can tell you, it's dangerous to look upon the nude female form, especially that of a goddess. For example, when Actaeon caught a glimpse of a bathing Artemis, she turned him into a deer so his own hunting dogs would devour him. When you looked at the nude Venus de Milo in her entirety, musing upon her prize and the Trojan War she started, you knew she was trouble. The Greeks invented the concept of the irresistible “bad girl" long before Kim Kardashian.

But how did we get to Kim Kardashian as today's Venus de Milo? The video above showing women's ideal body types throughout history starts with ancient Egypt and ends with KK as the epitome of “post-modern" beauty, stopping briefly in the middle to visit the Venus de Milo and ancient Greece. In many ways, the Venus de Milo's rediscovery in 1820 begins the politicization of female beauty. A Greek may have unearthed her, but it took a Frenchman, Jules Dumont d'Urville, to recognize her value. Like so many educated men in the 19th century, d'Urville knew the work of art historian Johann Joachim Winckelmann. “Winckelmann's belief that Greek art flourished because of the political freedom in classical times became almost a mantra for orators during the French Revolution," Gregory Curtis writes in Disarmed: The Story of the Venus de Milo. “And his belief that art can reveal the divine as well as or better than religion is still with us today." The goddess of Greek religion thus became the new “goddess" of faith in modern democracy.

Following Winckelmann's cue, d'Urville (shown above) and the French government purchased the statue and made her the “face" of their propaganda program. Beauty became a commodity and political weapon like never before. The old Greek symbolism of good looks equals good person transformed into modern political theory that possessing good looks (in statue form) equals good government. Obviously, the American government doesn't use Kim Kardashian for propaganda purposes, but who can argue that she's not the “face" of contemporary America's obsession with social media and reality television? If our main export is our popular culture, we've been shipping a lot of Kim around the world lately. The American Society of Plastic Surgeons used to have the Venus de Milo as part of their official seal. How long before they put “post-modern" beauty ideal Kim Kardashian in her place?

Although men have used the beauty of the Venus de Milo for two centuries now for their political purposes, women are starting to claim her as one of their own. In October 2012, the activists Femen France protested ineffectual French laws against rape by posing topless in front of the Venus de Milo (shown above). They placed a sign on the statue reading “Rape Me, I Am Immortal," alluding to the statue's missing arms, which they used to symbolize female vulnerability to sexual violence. “We have hands to stop rape," the protesters shouted in contrast, calling for female empowerment at the feat of the helpless goddess. As ideas of female beauty and what that beauty means (and to whom) evolve, the Venus de Milo keeps getting rediscovered and reconsidered as a game changer in history's great beauty pageant.