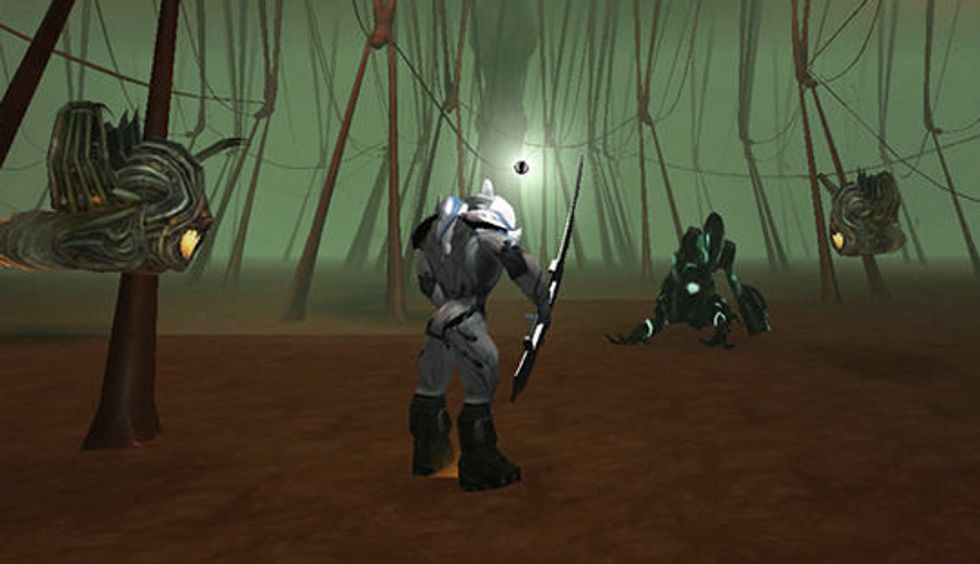 Should the government protect society from the bad effects of violent videogames? Game-makers invoke freedom of speech to stave off such laws—including California's 2005 attempt to ban violent-game sales to minors, which the U.S. Supreme Court will take up this fall. But maybe there's a better defense: According to this paper (pdf), published this month in the Review of General Psychology, there's nothing to protect against, because violent games have no bad effects.

Studies to the contrary, which say violent games make kids more likely to be nasty, brutish and curt, are better read as an indictment of academic psychology than of Grand Theft Auto, asserts the new paper's author, Christopher J. Ferguson, a psychologist at Texas A&M. "Violent video games are like peanut butter," Ferguson told Reuters earlier this month. "They are harmless for the vast majority of kids but are harmful to a small minority with pre-existing personality or mental health problems."

Maybe it's because almost every American under 40 has played videogames, but Ferguson apparently decided society could stomach open rebellion. There's no quiet mumbling in his journal-battles with anti-game psychologists—notably, this year, with Craig A. Anderson of Iowa State. These are ferocious, with both sides accusing the other of cherry-picking data, "cynically" (Ferguson's word) massaging experimental protocols to get desired results, ignoring inconvenient evidence and misrepresenting opponents.

You can get an idea of the tone from this paper (pdf) of Ferguson's, published in March under the title "Much Ado About Nothing," and "Much Ado About Something," the reply (also pdf) from Anderson and colleagues Brad J. Bushman and Hannah R. Rothstein. The rhetoric might entertain you (in a videogamey way). More likely, it will leave you mistrustful of the "games are poison" school in particular, and psychologists' claims about any politically hot topic in general.

Here is why: Were I to hyper-cautiously set aside all the disputed points in Ferguson's indictment, I would still be left with this damning list—flaws in the "games harm kids" argument which suggest flaws in any claim that "psychologists know X hurts people."  These points struck me because they're the ones that even opponents don't dispute:

1. The link between videogames and serious violence is feeble. In their riposte, Anderson and his colleagues admit this, saying their Ferguson and his allies "probably are correct in noting that violent video games have a weaker effect on serious acts of aggression and violence than on less serious acts." But, hey, acts of serious aggression is so rare, they say, "they are difficult to predict with relation to violent video game exposure or any other single risk factor."

Ponder that one for a second: It means nobody, not even the most anti-game researchers, has evidence that violent games lead to violent acts. Instead, the studies claim that the games make it more likely that a kid will manifest "aggressive" or anti-social thoughts or behavior. (What one researcher calls aggression, though, another might label "boys at recess.")

2. The measurement of "aggression" is not consistent from one study to the next. "Ferguson and Kilburn raised a potentially valid point about the use of unstandardized aggression measures," write Anderson and Co. If I understand their argument, they're claiming this doesn't matter, because aggression is aggression, however it is quantified: Your score on one measure will be consistent with your score on another. Maybe so, but the anti-game case would be much stronger if the all those rafts of papers were referring to the same thing.

Anderson and his colleagues concede that correlations in violent-games studies are "small" to "medium" in size. But, they write in the Much Ado paper,  "effect sizes" in that range were big enough to establish a risk to physical health from lead, asbestos or second-hand smoke. (Ferguson says no; as for me, when I Googled asbestos and cancer, I turned up references to correlations ranging from r=.4 to r=.88.) Their other line of defense really gave me pause. It is that "this is the range of effects most commonly observed in social psychology." Hmm.

This journal-jousting will no doubt continue (I highly recommend a read of the three papers below for more details).  Meanwhile, the rebels are on the move: Ferguson's latest paper says it's time to examine the positive effects of violent videogames. That would include the way online games encourage socializing; the way first-person shooters hone visual acuity; and the way young cancer patients benefit from playing this.