The neurological and social benefits of poetry

Some people think that poetry is just rhymes. But those people don't know that poetry helps your brain heal during bad times. (Hey, we tried) 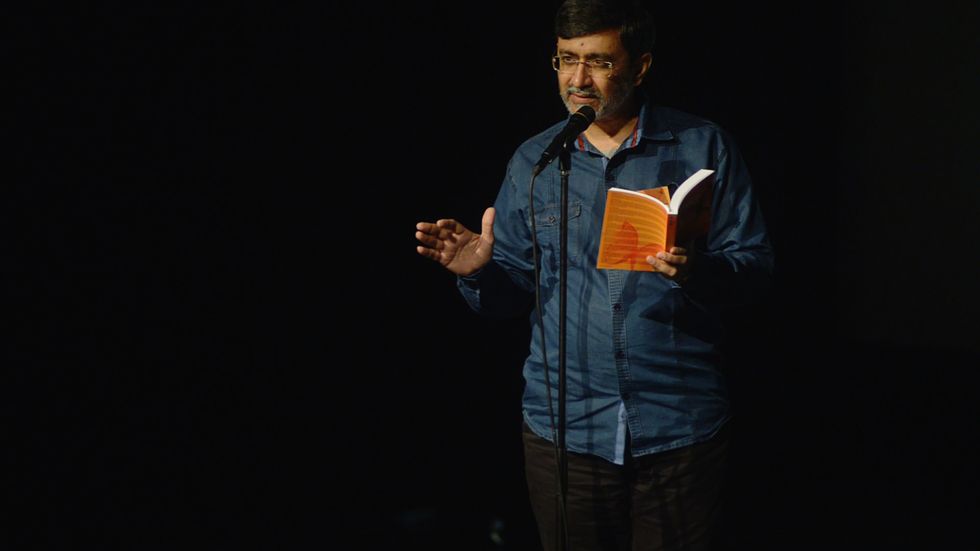 One of the greatest achievements in all of literature, the Indian epic, Mahābhārata, is, at 1.8 million words in length, the longest poem ever written. The hundred thousand śloka (200,000 verse lines) fill a book nearly ten times the length of the Iliad and Odyssey combined. Like many mythological traditions, the stories were passed down through the generations orally.

Did anyone memorize the entirety of this classic? Sanskrit, like Latin and other languages, features mnemonic devices—rhyming is quickest to mind. Our brains chunk information when committing it to memory; a word with a verbal connection to another makes it easier to file and store for recall. Whether or not anyone faithfully recited the entire story of the Kurukṣetra War is open for debate, but the memorization of poetic texts is an old endeavor indeed.

Poetry broadly fell out of favor for some time. Gone were the days when Pablo Neruda could rally laborers to revolt. No more megaphones for Allen Ginsberg in Washington Square Park. While certain poets—Saul Williams, Carl Hancock Rux, Bahamadia, Floetry—kept verse alive backed by music, social media has ushered in a new generation of poets to showcase their skills.

Noname is a Chicago rapper who flows over soul music like nobody’s business. Her Tiny Desk performance from April has over 1.2 million views. While initially hypnotized by her unique style, repeated listenings of “Diddy Bop” reveal a tale about the tribulations of growing up:

Ooooooh, you about to get your ass beat / For stealing that twenty dollars like “baby, just ask me” / Mama says she love, love, loved us / When the lights was off we had to stay with cousins

As with most lyrics on a screen, delivery is where the magic happens. That fact does not render the written page mute. Poetry required serious academic study. The memorization of verse was thought to build character. In 1944 the UK cut the memorization and recitation of poetry from its educational curriculum. Critics were upset—to some, poetry is education. The nation came to its senses in 2012, when it reinstated poetry in the primary English curriculum.

Oh, memorization, how we hated the art of learning then repeating growing up! Yet there’s a qualitative difference between volleying facts back to a teacher and diving into the depths of poetry. That’s the reason University of Cambridge’s Poetry and Memory Project was founded: to uncover the neurological and social benefits of poetry. Turns out there are many:

The overarching conclusion of the project is that committing a poem to memory appears to have real benefits. Almost all respondents not only reported that memorisation is a positive experience, but also associated it with a wide range of positive effects.

While appreciation for the poem itself was the first response—learning something often leads to admiration—the project also reports the development of empathy and a deepening emotional connection to loved ones as top replies. The memorized poem, researchers write, serves as “a container for thoughts and emotions.” Just as we imagine a soul inhabiting our biological processes, researchers discovered a metaphysics of verse:

Responses suggested that once a poem is inside you, it can feel as if you are on the inside of the poem. This sense of inhabiting may in turn open up a space in which understanding can unfold.

I recall my younger self wearing down the pages of The Captain’s Verses during a lonelier period of life. Neruda’s resignation to longing filled a seemingly uncrossable valley in my heart. One I put to memory is “Your Laughter,” which concludes:

Laugh at the night, at the day, at the moon / laugh at the twisted streets of the island, / laugh at this clumsy boy who loves you, / but when I open my eyes and close them, / when my steps go, when my steps return, / deny me bread, air, light spring, / but never your laughter for I would die.

Since poetry bursts forth with imagery, memorization of verse has the potential to work like a mind palace. By connecting mental images with objects instead of printed words, you weave the object into a larger narrative that could have lasting effects. It’s a cumulative process, collecting verse and integrating it into your perception of life. This practice expands your comprehension of the interconnectedness of life, helping you piece together what might seem like disparate parts.

Which is especially relevant in a time of partisan media. Instead of chunking information broadly, today we collect data we agree with and discard the rest. As reported last week by the NY Times, nearly half of Americans didn’t even realize Puerto Ricans are also American citizens, which is, incredibly, the reason some pundits claimed the government’s response to Hurricane Maria was so slow.

Perhaps thumbing through Vincent Toro’s 2015 collection, Stereo. Island. Mosaic., would have reminded them. Of course, the relationship between the island and mainland has not exactly been prosperous for Puerto Rico’s residents. Still, knowledge always trumps ignorance:

The roads of Borinquen steer into the gulleys where the ancestors have buried the villages secrets. They swoop up into the moon that each night promises us a chance to become the myths our masters spill into the sea.

Sometimes the sea spills the other way. Helping hands are needed. A poem cannot offer hands, but it can offer guidance on how to best use them.

Nothing in the history of literature has so elegantly connected imagination and action as a poem. The space between couplets offers pause for your imagination to take flight—the space between inhale and exhale a moment of quiet contemplation before beginning again. That silence connects everything before words come tumbling forward, the poem being both the space and what fills it.