Should We Tolerate the Intolerant?

Karl Popper's 'paradox of tolerance' has been reemerging, for good reason. 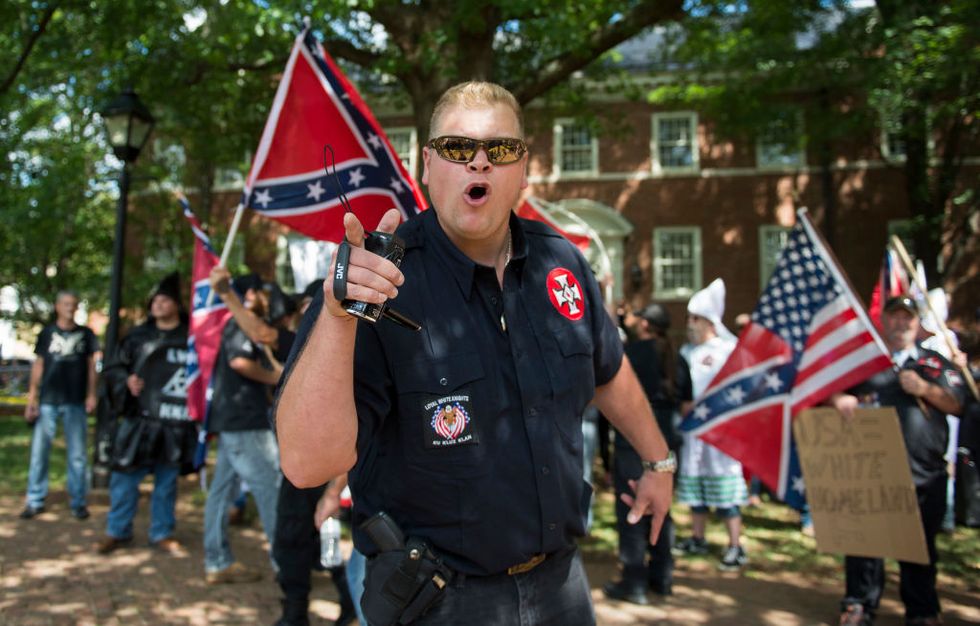 A member of the Ku Klux Klan shouts at counter protesters during a rally, calling for the protection of Southern Confederate monuments, in Charlottesville, Virginia on July 8, 2017. (Andrew Caballero-Reynolds/AFP/Getty Images)

Does free speech have a limit? This question has been repeatedly asked since the birth of the Internet. Ok, it’s been asked for thousands of years, but online communications have made it all the more pertinent.

We’re well aware of the dangers of trolling and the growing lack of critical thinking in an age of short attention spans. But when is enough enough? When is too much really too much? Vienna-born philosopher Karl Popper devoted a lot of time to this critical question, and his response, published over seven decades ago in the classic, The Open Society and Its Enemies, is worth revisiting.

Karl’s father, Simon, was literally a Bohemian, as in being born in Bohemia, providing a fitting parallel to Karl’s upbringing. His family was Jewish but converted to Lutheranism shortly before his birth. Being secular they were not concerned with religion, yet were occupied with social positioning. Staring down the barrel of World War II, however, Karl’s ancestry did not protect him from growing anti-Semitic sentiments. He emigrated to New Zealand.

Distance from Europe allowed him to write The Open Society, though a paper shortage during the war made it impossible for him to find a publisher. The subject matter did not help his cause. Popper’s scathing critique of three pillars of Western thought—Plato, Hegel, and Marx—was not readily accepted. Long story short, Routledge, based in London (where he would eventually settle), published it in two volumes in 1945. Today the book is considered one of the twentieth century’s most important philosophical works.

Popper felt that centuries of fawning over Plato’s ideas allowed scholars to miss overt totalitarian themes. For example, the notion that one great man is worth more than collections of mediocre men create the conditions for tyranny. He is equally unforgiving of Hegel and Marx. While his reasons vary from thinker to thinker, he believes this trinity is guilty of promoting totalitarian ideology.

Popper is not without his critiques. By decoupling Plato from Socrates critics feel he missed central points. But we’ll leave aside broader themes to home in on the ‘paradox of freedom,’ which Popper attributes to Plato: What if the free man elects a tyrant? What if a democracy willingly places into power someone who will destroy their freedom?

Popper quotes a number of instances in the Republic in which Plato states that only democracy has the potential to lead to tyranny, “since it leaves the bully free to enslave the meek.” Popper follows this with one of his most famous assertions: the paradox of tolerance.

Popper memes usually end here. Yet what he follows it up with is equally informative. He does not advise suppressing the intolerant. Let them speak, he says, as society’s rational mechanisms and popular opinion will have their way with such bigoted sentiments. Apparently Popper never met Alex Jones.

And still, like Gandhi, Popper knew violence was sometimes unavoidable. Popper went a step further: if the intolerant persist, if they refuse to even listen to arguments put forward by opposing factions, then we must stop them by “fists or pistols.” He concludes,

In the end Popper hopes for a government that provides equal protection to all parties willing to tolerate opposing ideas, which is, in many ways, at the heart of a liberal democracy. Each party should be held accountable to the public—a public, he feels, that should be reliably informed through the media.

Sounds so nice on paper. It would be interesting to see how Popper would respond to the Internet. He lived until 1994, but his ideas have to be reconsidered in light of anonymous movements, trolls, and election manipulation by foreign hackers. That an open society would ever be this open requires a new definition of tolerance.

Unfortunately, there is no overarching sentiment of what should or should not be tolerated. In his extensive book on human behavior, Behave, Robert Sapolsky scours the data on the formation of morals. Sifting through many conflicting claims, he writes,

Our moral intuitions are neither primordial nor reflexively primitive. They are the end products of learning; they are cognitive conclusions to which we have been exposed so often that they have become automatic.

In the West we’ve generally agreed that slavery, child labor, and animal cruelty are non-starters, even though segments of the population haven’t read the news (or read "alternative facts"). Add genetic superiority—essentialism, the lingo goes—to that list. Gut instincts are dependent upon learning, and what we learn is relative to the time and place we live, the people we surround ourselves with, what we pay attention to.

This does not imply that morality is a free-for-all, though. Politics is the legislation of morality, yet when politicians express outright intolerance we have to turn to our better angels for guidance. Sure, we can debate moral minutia, but what’s blatant cannot be ignored. And lately American culture has been rather blatant.

Popper knew that letting all voices to the table ruins the feast. Instead of communing together we dine upon each other. That’s the paradox we’re currently living through, and so long as we let “all sides” be treated as equal, progress will forever be stunted.