Researchers May Have Located the Neurological Origins of Misophonia 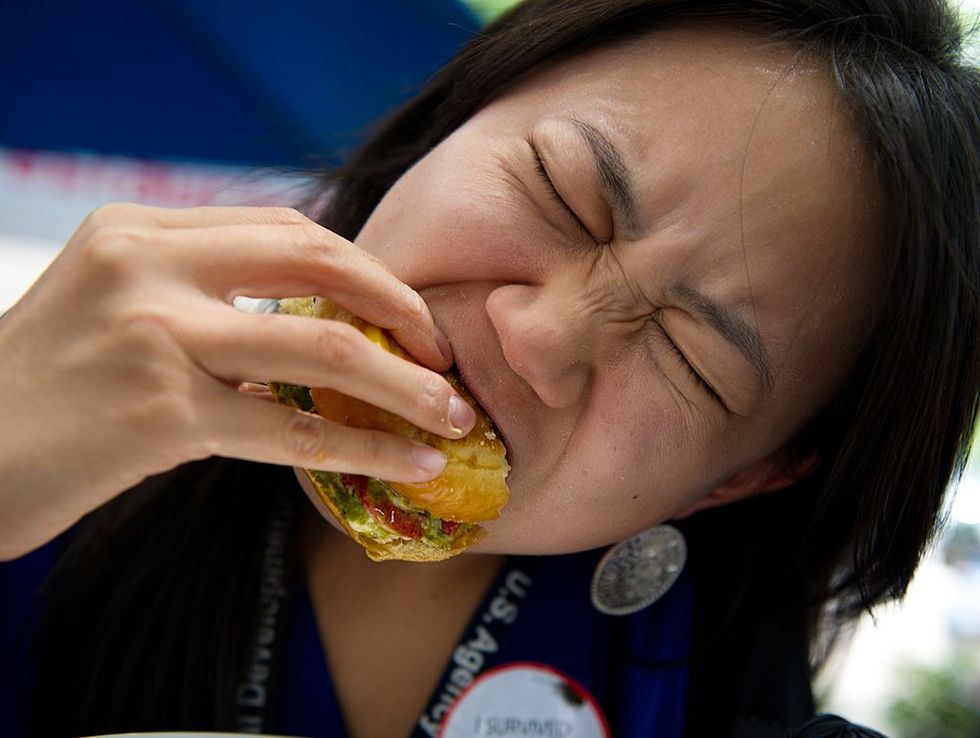 A patron takes a bite of a grasshopper burger June 4, 2014 during a global Pestaurant event sponsored by Ehrlich Pest Control, held at the Occidental Restaurant in Washington, DC. Karen Bleier/AFP/Getty Images

The sound of someone chewing with their mouth open stokes an inner rage. Ditto snapping gum. I’ve learned to navigate this frustration by keeping headphones in my pocket at all times and only eating with certain friends in loud restaurants. For most of my life I believed it to be a personal quirk until a friend informed me of misophonia five years ago.

First coined in 2001 by Emory University’s Margaret and Pawel Jastreboff, the term means “hatred of sound.” While it has not officially been classified in the DSM, it is speculated that it might be an emotionally-charged aural version of synesthesia or adjunct to anxiety disorder, which makes sense as I’ve suffered from that for as long. Regardless this condition has been of growing interest to researchers as the Internet has connected sufferers of this mysterious condition.

A new study by researchers at Britain’s Newcastle University posits a potential origin. Published in Current Biology, twenty misophonic sufferers and twenty-two controls listened to three sets of sounds: trigger sounds, such as eating and breathing, which invoke negative responses in misophonic individuals; annoying sounds such as a baby crying or someone screaming; and neutral sounds like rain.

Researchers rated how annoying each sound was to each group as well as focused on specific affective reactions in misophonic individuals. Trigger sounds indeed provoked anger and anxiety in them, which researchers located in the anterior insular cortex (AIC), the region responsible for emotional processing and perception of interoceptive (stimuli produced inside of an organism) signals.

Trigger sounds provoked “abnormal functional connectivity” between the AIC and regions responsible for emotional regulation, such as the ventromedial prefrontal cortex, hippocampus, and amygdala. They also increased the heart rate and galvanic skin response of misophonic sufferers. Lastly, those subjects rated bodily perception differently than the controls, correctly indicating their perceived distress.

This is important for those dealing with anxiety disorder. As anyone who suffers panic attacks knows, the onset of certain symptoms sets off a physiological chain resulting in an attack. Dealing with anxiety disorder often involves finding ways to disrupt your nervous system when those symptoms appear so the attack never transpires. Thus far, misophonic individuals have had to utilize the same avoidance or distractive methods, such as leaving the room when someone is chewing or putting in earbuds.

Unlike panic attacks, however, the response to misophonia is usually immediate. Hear the sound and your nervous system moves into fight-flight-freeze mode. Remove the trigger and anger and anxiety are quickly resolved. Yet that is not always possible. Dr. Barron Lerner sometimes sees patients that trigger his misophonia. Thus he’s had to use certain techniques for dealing with such situations:

During such encounters, I work to put aside my negative emotions and focus on the patient’s concerns, reminding myself that some of the sounds that irritate me are involuntary. I also remind myself that I am a professional whose primary responsibility is to the patient.

Fleeing is not the only option. Cognitive behavioral therapy is one potential source of coping, which involves finding other sounds to focus on—a challenge in a movie theater, though entirely possible at a concert. Research on treating misophonia like tinnitus is also ongoing. Neuroscientist Aage Møller believes it to be a “physiological abnormality” rooted in the minute cells and hairs in our ears that disrupts the normal functioning of our auditory system. This pathway could be what sends the AIC into overdrive.

Initiatives like the documentary, Quiet Please, and support forums are at least educating and connecting misophonics. Dr. Sukhbinder Kumar, the Newcastle study’s lead researcher, is hopeful that his group’s findings will at least “convince a skeptical medical community that this is a genuine disorder.” Inclusion in the next DSM would be a step in the right direction. As humans are sometimes immune to problems not directly affecting them, advice to “just get over it” would hopefully never be uttered again.

By isolating the brain regions responsible for the emotional short circuit opens up exciting areas of treatment for longtime sufferers. Until then, we cope however we can, comforted by the fact that we’re not alone. While certainly not a debilitating disorder for most sufferers, there is nothing pleasant about hating sound.