When we think of flu shots, we think of ourselves, perhaps an elderly family member or a child, avoiding the terrible sickness and for the vulnerable, the complications that can come with it. But did you know your dog can catch the flu? Symptoms in canines are similar to humans. They cough, sneeze, run a fever, get a runny nose, turn lethargic, and experience a loss of appetite. In severe cases, canine flu can cause pneumonia and even death. But this is rare.

Most are mild cases and usually last a couple of weeks or so. In fact, dogs don’t always show symptoms. That’s a problem, because if you have more than one, your other dog(s) can catch it. Know that any dog who has the virus is contagious. And if you or someone in your household has the flu, the dog can catch it from them. Though all breeds are susceptible, those with scrunched up faces like Pekinese or French bulldogs are especially prone, due to how their respiratory systems are laid out.

Dogs catch flu just like we do, from being in an area where someone carrying the virus has coughed or sneezed, releasing what’s known as aerosolized respiratory secretions. They can also get it from contact with another dog’s saliva, say when licking them or playing with their toy. There is currently a shot which can reduce the severity of the condition. There’s also a vaccine available, but it uses a dead virus and offers only limited protection, for a short period of time.

Which leads to a bigger problem. Scientists are worried that canines may serve as “mixing vessels,” creating new strains, perhaps even one that can infect people. That’s why researchers at the University of Rochester School of Medicine and Dentistry have now created the world’s first, long-term, comprehensive vaccine for dogs. Well, two actually. Multiple viruses can affect canines. The most common and concerning are the H3N8 and H3N2 strains. 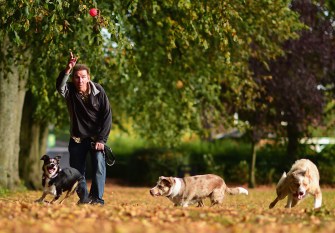 Multiple dog owners should be particularly cognizant of the presence of canine flu.

A new strain jumping from dogs to humans is indeed possible and worrisome, considering the amount of contact dog owners have with their pets, and other people. This has happened with other species, such as with swine and avian flu. Considering how popular dog ownership is, a potent cross-species strain could spread like wildfire, and become a serious threat to public health.

Most inoculations use a dead form of the virus. But this doesn’t offer adequate protection, according to Luis Martinez-Sobrido, Ph.D. He is an associate professor in the department of Microbiology and Immunology at the university, and led the study. Martinez-Sobrido and colleagues created two “live-attenuated” vaccines for H3N8 canine influenza. This is a live virus which has been hobbled, so that it can’t cause an infection. It helps the immune system produce antibodies built to last, offering long-term, comprehensive protection.

To render it impotent, postdoctoral fellows Aitor Nogalez-Gonzalez, Ph.D. and Laura Rodriguez, Ph.D. used a type of genetic engineering called reserve genetics. Here, they snipped out the protein NS1 from H3N8. Previous studies have shown that removing NS1 can weaken the virus so much, it is unable to cause infection. Here, the virus can replicate in the nose, where it doesn’t do damage, rather than in the lungs. When this genetically altered version enters the dog’s nose, an immune response is triggered wiping it out, and allowing for the production of antibodies to halt future attacks from the selfsame pathogen. 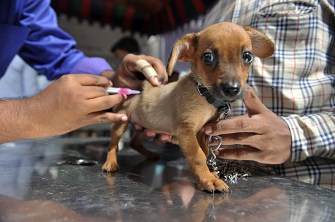 While there’s a shot that can limit its severity, this new vaccine should offer long-term protection.

The vaccine was tested on mice and dog tracheal cells, where it elicited the appropriate immune response. This technique has been used successfully in horse and pig flu virus vaccines as well. The next phase is to test it in clinical trials on dogs. It’ll be a few years before it’s available at your vet however, barring any holdups.

H3N2 is the most common type among canines. It was first identified in South Korea in 2007 and entered the US in 2015. Outbreaks occurred across the Midwest in 2016. A Chicago vet told the New York Times that he saw 20 cases per day at one point. It continues to be found in more and more states. H3N8 developed first in China and Thailand, originating from a mutated avian flu strain, according to the CDC.

First discovered at a greyhound racetrack in Florida, it’s now found in 40 states. Dog owners who have a solitary dog at home, who doesn’t come into contact with other dogs, needn’t worry. Those who take their pet to the dog park, doggie daycare, or to the kennel when they go away, should be aware of the virus.

So what can you do if your dog catches the flu? Keep it away from other dogs, give it access to plenty of fluids, check with your vet, and make your pet as comfortable as possible. Know too that in some states, veterinarians are required to report canine flu cases. Since the virus is still very new, you’ll be helping to track the disease. While the vaccine once introduced, is likely to bring it under control.

Scientists and Imogen Heap team up to create the perfect song to make a baby happy.