Behind Olympic Cupping, a Story Rooted in Ancient Religions

While cupping hit the mainstream thanks to Olympic athletes, the practice has a religious history in Islam. 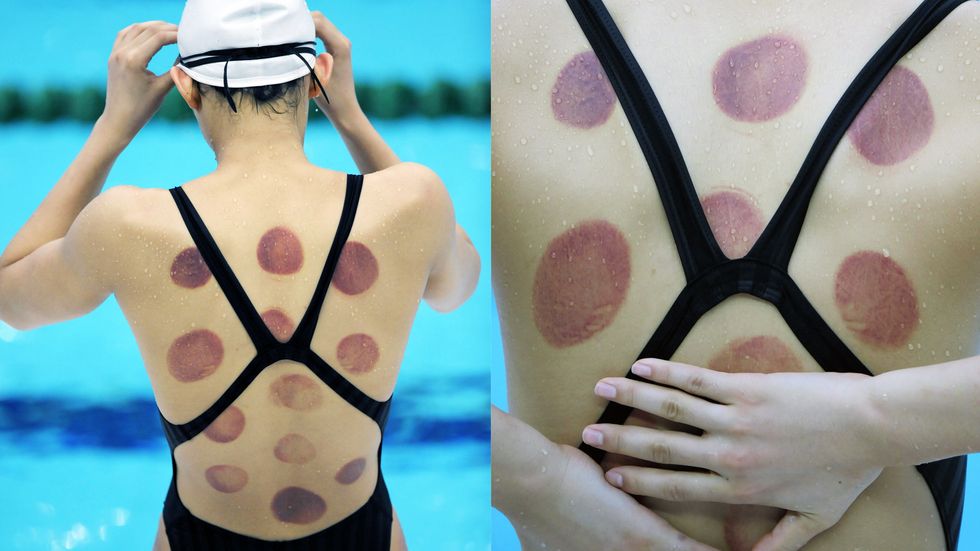 Chinese swimmer Wang Qun is seen with marks after cupping treatment during a training session at the National Aquatics Center a few days before the start of the Beijing 2008 Olympic Games. (MICHAEL KAPPELER/AFP/Getty Images)

At the Rio Olympics, photos of circular purple hickeys decorating American swimmers were featured worldwide. Commentary from Olympians was overwhelmingly positive: cupping was said to help recovery time and pain management. In most outlets this was repeated verbatim. America had another alternative therapy du jour.

Does this meaning cupping works? Probably not.

While most commentators point to Traditional Chinese Medicine (TCM) as the originator of cupping, where it is heated and believed to shift the body’s energetic field, it has actually been used by a variety of cultures for at least 5,000 years. Egyptians were sticking suction cups on each other over 3,500 years ago, while Hippocrates was known to get his cup on.

Most interestingly, though, is the religious reverence given to wet cupping in Islam. Muhammad prescribed this version, which involves creating a small incision in the skin before suctioning, as recorded in the hadith.

Otherwise known as hijama, this ‘drawing out’ removes the jinn, or evil spirit, from the possessed. Along with the jinn being booted, any black spells associated with the spirit were also dissolved. Depending on the fanaticism level, hijama is a ‘cure for every disease’ or ‘certain diseases,’ although which ones are not elaborated upon. Instead, it is recommended on the ‘odd days of the Lunar calendar,’ and, obviously, is best on an empty stomach.

As with many such ‘sciences’ bloodletting is purported to remove toxins from the blood. That is the liver’s role, but I suppose since you’re discarding actual blood from your body, anything in it will, by default, leave as well.

A practitioner pricks the patient's skin with a needle during a blood cupping session in Singapore. Cupping therapy dates back to ancient Chinese, Egyptian and Middle Eastern cultures and is used to treat a variety of medical conditions ranging from skin problems, blood disorders, fertility disorders and stroke. (Photo by Suhaimi Abdullah/Getty Images)

Support for cupping in the scientific literature does not bode well. Most evidence in favor of cupping comes from studies conducted by TCM practitioners, while most conclude that ‘more research is needed.’

One paper found cupping ‘not significantly convincing.’ A particularly disturbing paper documents patients in Rome and Mekele, Ethiopia. Researchers found lesions thought to be caused by trauma or violence to be cupping-related. One of the more unique endorsements of hijama comes from Pakistan:

ACT [Asif cupping therapy; the author’s first name is Asif] is novel quantum based energy model that successfully gives details that CT [cupping therapy] is a meaningful route based on electrical connectivity of deeper structure with quantum orifices present over the skin and application of negative vacuum and bloodletting facilitates the therapeutic expulsion of stagnated and intoxicated energy.

The main problem with such explanations is that energy has a definition, and it is measurable. Cupping, which has its most well known roots in TCM, is said to work by shifting the body’s qi, a mystical energy field that cannot currently be measured by Western standards—the exact response I’ve seen over and again anytime practices like acupuncture, cupping, and other TCM practices are questioned.

Western medicine, the nebulously employed term used when criticizing Euro-American medical approaches, is not perfect. The double-blind study is not without faults. Nearly unregulated pharmaceutical companies raking in billions of dollars on what should be generic prescriptions is heartbreaking and unsettling. An avoided conversation about diet being at the root of our diseases of affluence is tragic. No sane person would argue against these points.

Yet turning back to millennium-old hadith or a system that believes tiger penis offers aphrodisiac powers with no consistent evidence is equally boggling. As medical doctor Harriet Hall notes regarding acupuncture and cupping, “It can’t be stressed often enough that the plural of anecdote is not data.”

Religion requires a certain suspension of disbelief for it to be effective. Applying this mindset to medicine is dangerous. If future studies prove the efficacy of cupping related to specific conditions that would be a wonderful, non-invasive advance to be celebrated. That time has yet to come.

The process involves pricking the skin with needles before immediately applying a cup on top to draw congealed blood. Although the treatment is used widely throughout Asia and the Middle East, western medical groups remain sceptical of the health claims made by supporters and practitioners of the therapy. (Photo by Suhaimi Abdullah/Getty Images)