Our Troubling (And Sexist) Fascination With High Heels

Nicola Thorp was recently sent home without pay for refusing to wear heels. Sexism in the workplace is only the first problem with this footwear. 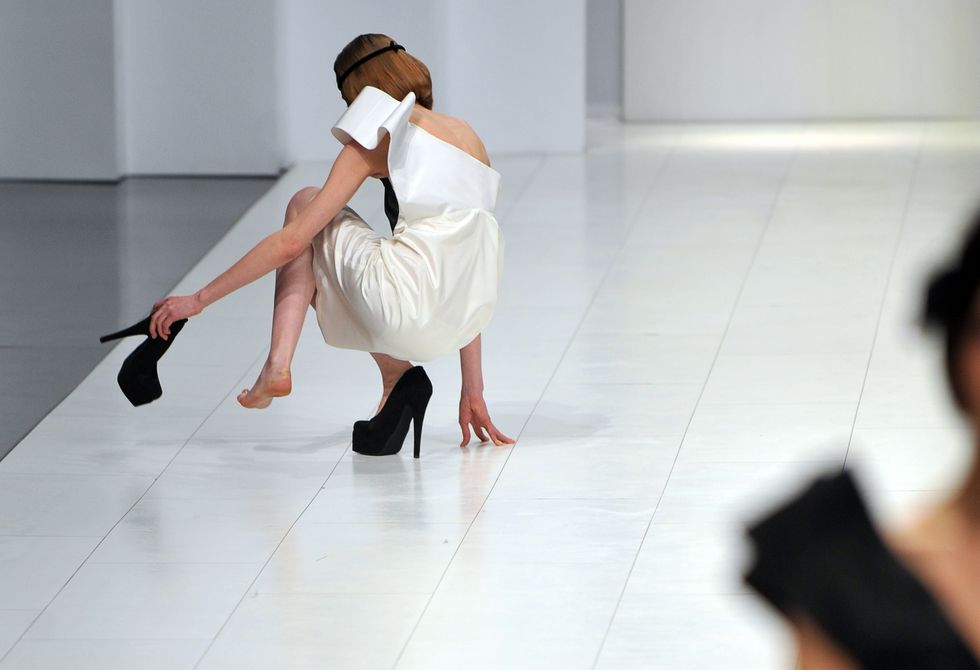 Standing up is no small feat. Bipedalism is one of the qualities that helped humans climb the food chain. Yet, observing the hunched habits of smart phone addicts, we may return to quadrupedalism soon enough. Evolution does not take our well-being into consideration.

The fault is ours. As Daniel Lieberman argues, cultural evolution often affects our genome more than biological evolution. Our diet and sleeping patterns, the lights we use, machinery, and the climate we live in all influence our DNA. As does our fashion choices.

Recently Nicola Thorp, temping for a London employment agency, was sent home without pay for refusing to wear high heels. She was laughed at when mentioning her male counterparts rocking flats. For all the exhortation regarding equal pay in America, equal dress is rarely uttered.

Video memes highlighting old cinema have been emerging—Hollywood’s ‘Free, White and 21’ moment; the sexual and social dominance of spanking—yet little discussion regarding chronic injuries from elevating your heels two to four to six inches off the ground circulates. That is, until Thorp started an online petition, which has garnered 140,000 signatures.

Her argument, along with many others, is that forcing women to wear heels is sexist. While this is certainly true, a deeper issue is at play: humans did not evolve to mosey about with aloft heels. The biomechanical price we’re paying is horrific.

Consider the complex mechanisms that allowed us to stand in the first place. First, our hips. Chimpanzees don’t walk as much as waddle thanks to backwards-facing ilium. Evolution did us a solid by rotating our pelvis sideways, which creates a smoother gait and allows for greater range of motion in our legs. The two curves of our spine is another mechanical victory.

Everything begins with our feet, however. A quarter of our muscles lie below our ankles; each foot features thirty-three joints. Arches are another win—they help give us a spring in our step. Sure, we no longer have an extended big toe; swinging on branches is no longer possible. In that, evolution has failed us.

Given the benefits of bipedalism—the ability to see into the distance to avoid predators; freeing up our hands to accomplish innumerable tasks—sacrificing marsupial acrobatics is understandable. Yet so few of us treat our feet like the incredible tools they are. Instead we shove them into tight mittens, as if each was merely one bone protected by a sock and leather. If you think you have bodily control, try moving each of your toes independently.

This terrible habit of binding our feet with restrictive molds on a daily basis not only aids in causing bunions, hammertoes, and plantar fasciitis, the effects reverberate system-wide. Biomechanist Katy Bowman writes,

The complex machinery of the feet plays a critical role not only in the obvious realms of gait patterns and ankle stabilization but also in whole-body balance, nerve conduction, and cardiovascular circulation.

The cultural appreciation of high heels is broad and deep: sexual fetishism, toned legs and rear, being civilized. One New Yorker writer admits to being ‘a slave to the desire that rules our libidinal culture.’ Bowman notes that lack of shoes was associated with savagery in high society—covering your feet translated to class status. People believed they were elevated from the ground, literally and figuratively.

While I’m a barefoot advocate and have worn minimalist sneakers for a decade, I’m not anti-shoes. My half-dozen pairs emerge as necessary. But in my yoga and fitness classes I daily watch consistent gait problems and turnouts, as well as perpetual balance issues. When I offer foot stretches foreheads cringe and tempers flare. I find it odd that we exercise and stretch every part of our bodies on a regular basis except our feet.

The chain of pain beginning in our lowest extremity resonates upwards. Calves, low backs, shoulders, and necks all potentially bear the brunt of wearing heels. Constant shoe wearing itself is a major problem, given the sensory awareness we miss out on. Amazingly, one reason seniors fall is due to a lack of connection between their feet and brains thanks to a lifetime of shoes.

We might not call the barefoot savages anymore, but shoes are part of our identity. They help us move around in the world, yet they also show others how we move around in the world. We confuse symbol with reality. We sacrifice health for status, mistaking comfort with poor habits. And then, as Nicola Thorp’s case points out, we demand others adhere to certain conventions due to an ignorance of what truly matters.

Egocentric creatures that we are, humans often mistakenly consider our quintessential features to be special when in fact they are simply unusual.

Unusual, and all too often, anything but healthy.