Late Medieval England had its share of problems. The Wars of Roses raged, the Black Death killed off large parts of the population, and passing ruffians could say “Ni” at will toold ladies.

To make matters worse, a first of its kindstudy published in theInternational Journal of Paleopathology has demonstrated that much of the population suffered from another plague — a plague of bunions likely caused by a ridiculous medieval fashion trend.

If the shoe fits, it won’t cause bunions 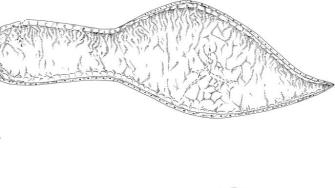 The outlines of a leather shoe from the King’s Ditch, Cambridge. It is easy to see how these shoes might be constricting. Copyright Cambridge Archaeological Unit.

The bunion, known to medicine as “hallux valgus,” is a deformity of the joint connecting the big toe to the rest of the foot. It is painful and can cause other issues including poor balance. The condition is associated with having worn constrictive shoes for a long period of time as well as genetic factors. Today, it is often caused by wearing high heeled shoes.

The medieval English didn’t care for high heeled shoes as much as modern fashionistas, but there was a major fashion trend toward shoes with long, pointed toes called “poulaines” or “crakows” for their supposed place of origin, Krakow, Poland.

This trend, already silly-looking to a modern observer, got out of hand in a hurry. According to some records, the points on nobleman’s shoes could be so long as to require tying them to the leg with string so the wearer could walk. At one point, King Edward IV had to ban commoners from wearing points longer than two inches. A couple years later, he saw fit to ban the shoes altogether.

But, just knowing that people back in the day made poor fashion choices doesn’t prove they suffered for it. That is where digging up old skeletons to look at their feet comes in.

Beauty is pain: the price of high medieval fashion

To learn how bad the bunion epidemic was, the researchers looked to four burial sites in and around Cambridge. One was a rural cemetery where poor peasants were buried. Another was the All Saints by the Castle parish, which had a mixed collection of people that tended toward poverty. The Hospital of St. John’s burial ground contained both the poor charges of a charity hospital and wealthy benefactors. Lastly, they considered the cemetery of a local Augustinian friary, home to monks and well-to-do philanthropists.

The team considered 177 adult skeletons that were at least a quarter complete and still had enough of their feet to make studying them possible. The remains were classified by age and sex by observation and DNA testing. Each was examined for evidence of bunions and signs of complications from the condition, such as falling.

Those buried in the monastery’s graveyard were the most affected. Nearly half, 43 percent, of the remains found there had bunions. This includes five of the eleven members of the clergy they found. Twenty-three percent of those laid to rest at the Hospital of St. John had bunions, though only 10 percent of those at the All Saints by the Castle parish graveyard did.

The rural cemetery had a much lower rate of instances, only three percent, suggesting that these peasants were able to avoid at least one plague.

The authors note that the rural cemetery having fewer cases is partly because that cemetery “went out of use prior to the wide adoption of pointed shoes, and it is likely that those residing in the parish predominately wore soft leather shoes, or possibly went barefoot.”

Those skeletons with evidence of bunions were more likely to have fractures indicative of a fall. This was more common on those estimated or recorded as having lived past age 45.

In our much more enlightened times, 23 percent of the population currently endures having bunions, most of them women, and one of the leading culprits behind this is the high heeled shoe.

Tags
culturefashionhealthhistorymedicine
In this article
culturefashionhealthhistorymedicine
Related
The Past
The Wild West was lawless and chaotic — and the police helped keep it that way
Lawmen and outlaws were often the same people.
Thinking
6 great philosophers and how they used their political power
Most philosophers merely contemplate the world, but what about the ones who actually tried to change it?
Neuropsych
Asthma drug brings back “lost” memories
In a study involving mice, scientists used two different techniques — one optogenetic and one pharmacologic — to recover “lost” memories.
Life
Our antidepressant drugs are affecting animals and ecosystems
A toxicologist explains the impacts of antidepressants on fish — and no, they’re not getting any happier.
The Past
Ancient migration: Bering Strait land bridge from Asia to North America was not a one-way road
Ancient humans crossed the Bering Strait land bridge from Asia into North America. But some of them went back.
Up Next
Starts With A Bang
How ‘Cosmic DNA’ Revealed Exoplanet Siblings Raised In The Same Nursery
How two seemingly distinct exoplanet systems turned out to be related.Practically every star in the Milky Way has a similar origin story. At some point in the past, a molecular cloud […]