How does meditation work? 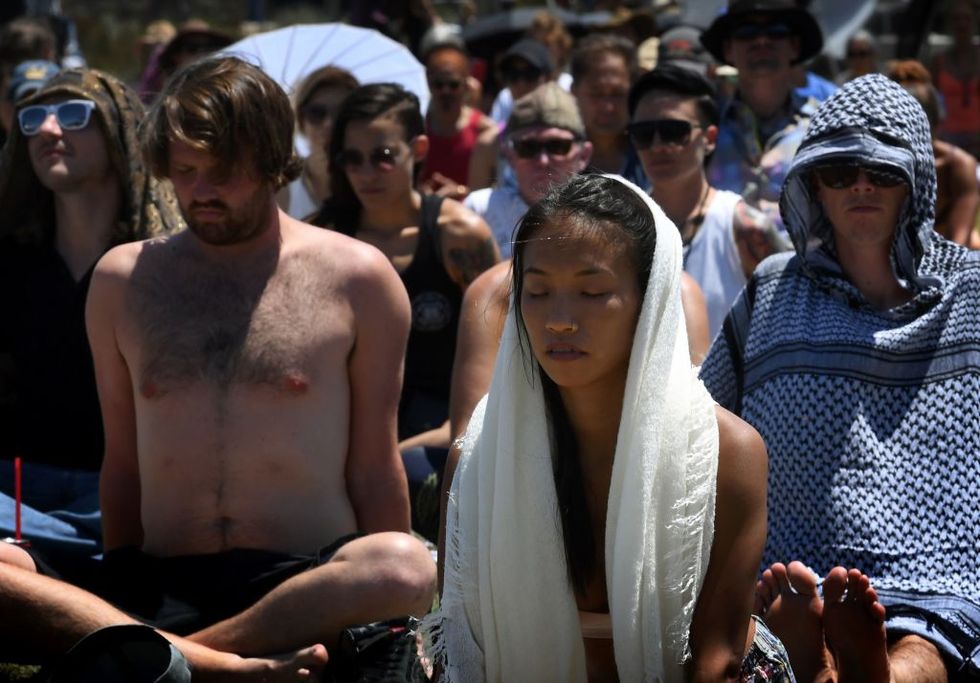 People meditate during a during a mass meditation session at the DisclosureFest in Los Angeles, California on June 17, 2017. (Photo: Mark Ralston/AFP/Getty Images)

Meditation. Perhaps you've been told you need to start. Maybe you've tried, found it dumb, and moved on. Or you have no idea where to begin. You download an app, then another, switching from voice to ambient music to binaural beats in hopes of finding something that works, which all raises the question: How does meditation work?

Seeing meditation as one thing is the first problem. That's the consensus of two experts and longtime friends, Daniel Goleman and Richard J. Davidson. These men are responsible for first scanning the brains of Buddhist monks, a psychologist/journalist and neuroscientist famous for making “emotional intelligence" and “affective neuroscience" mainstream. How you're meditating — what your point of focus is while practicing — affects different neural circuitry, which changes what you get out of your sessions. That's one of the driving ideas behind their new book, Altered Traits: Science Reveals How Meditation Changes Your Mind, Brain, and Body. While meditation is popularly presented as a panacea for the world's ailments, Goleman and Davidson have written a highly approachable work based on solid clinical evidence. Being researchers and longtime meditators themselves — both started in the seventies and have kept up a daily practice — they wanted to parse the science from the hype.

They explored six thousand studies conducted over the last few decades, deciding to use sixty for their book. Their interest is not in the “highs along the way," but “who you become" from a dedicated practice, which hints at the title. An altered trait is different from an altered state, as Goleman told Big Think:

Altered states are temporary conditions. When whatever it was that brought on the special state of awareness leaves, then the state fades. So if you get into a flow state rock climbing, when you come down from the mountain it's gone. Altered traits, on the other hand, are lasting changes or transformations of being. They come classically through having cultivated an altered state through meditation, which then has a consequence for how you are day-to-day that's different than how you were before you tried the meditation.

Unsurprisingly, the more you practice, the more altered traits appear. For Olympic-level meditators, who have practiced for more than 62,000 hours, life resembles a constant state of meditation rather than a sudden shift in brain chemistry. They're able to switch attentional focus at incredible speeds, dropping into whatever style of meditation is requested within seconds, returning to conversation equally quickly.

But what are these states? One chapter is dedicated to metta, a Pali word that translates to “loving kindness." Goleman says this practice often accompanies mindfulness, with an internal focus on someone you love or care deeply about. This could even be yourself — certain therapeutic applications are designed to quiet negative self-referential chatter. Short phrases about kindness are repeated in your head. Goleman continues,

It turns out that the repetition of those phrases is psychoactive; it actually changes the brain and how you feel right from the get go. We find, for example, that people who do this meditation who've just started doing it actually are kinder, they're more likely to help someone in need, they're more generous, and they're happier. It turns out that the brain areas that help us or that make us want to help someone that we care about also connect with the circuitry for feeling good. Meditation is often marketed as anxiety relief. While classically the goal is to dissolve the ego, stress reduction is quite popular. Fortunately the science holds up here as well. As with other styles, the more you put in, the more benefit you receive, even though, as Goleman says, even one session has proven to help people deal with stress. The effects just won't last as long if the practice isn't continued.

This is really the sign of resilience. Resilience is measured scientifically by how long it takes you to get back to what we call your baseline that pleasant mood you're in before that thing flipped you out. The shorter that is the more resilient you are. We see this as a lasting trait in long-term meditators: they are able to bounce back from stress. Also we see that their amygdala, that trigger point for the stress reaction, is less reactive; they're calmer in the face of stress.

One of their most incredible findings concerns longtime meditators and their relationship with pain. These monks recognize what many of us think of as painful as sensations; they're able to immediately quiet the neurological stimulation and return to baseline. This is, in part, because when we think something should be painful, or are expecting something painful to occur, we start feeling pain before it begins:

Ordinarily if you bring someone into the lab and you tell them we're going to give you a burn in ten seconds—it won't cause blisters on your skin but you're going to feel it — it's going to hurt. The moment you tell them that the emotional circuitry for feeling pain goes ballistic, as though they're feeling the pain already. Then you get them the touch the hot test tube and it stays ballistic, and they don't recover emotionally.

Not so the case for longtime meditators:

The Olympic level meditators had quite a different response. You tell them you're going to feel this pain in ten seconds; their emotional centers don't do anything. They're completely equanimous. The pain comes and you see it register physiologically but there's no emotional reaction afterwards. In other words they're unflappable. Even though they experience the pain physiologically they don't have the emotional reaction.

Altered Traits is a treasure of proven benefits and styles of meditation to explore, meticulously detailing what the various practices known as mediation do and don't do. Just as jumping from task to task while awake is cognitively taxing, they don't suggest jumping from style to style. Spending months to years practicing one form of meditation appears more beneficial than trying many at once. But if you think meditation can help you, you're probably right — you need only to recognize which style you need. Then, you sit.