A new study from the University of Oxford reveals what foods are, and are not, healthy for the environment. 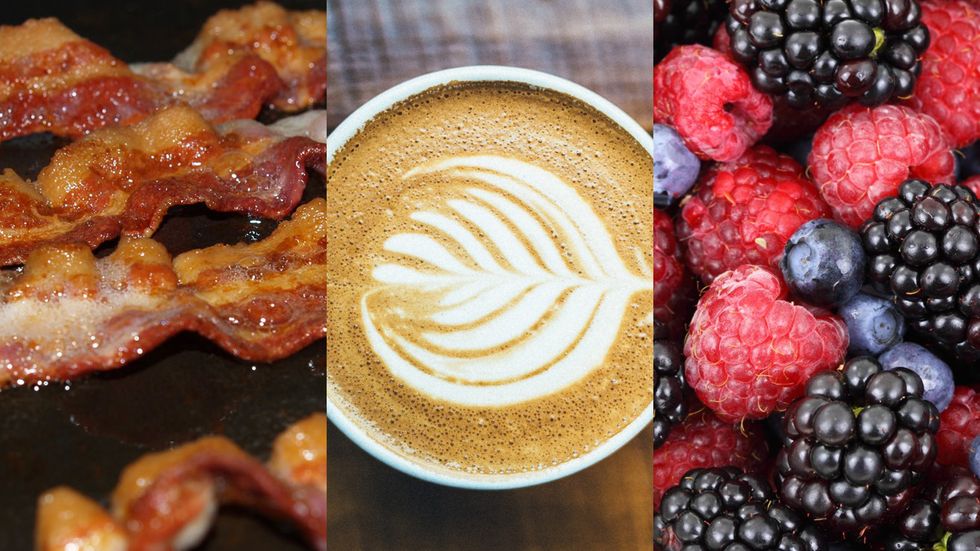 Bacon, coffee, and berries: Which food should you cut back on for the sake of the planet? (Credit: Creative Commons)

Nearly 200 people have been sickened and five killed due to an E. coli outbreak in contaminated romaine lettuce grown somewhere in Arizona. Investigators are still uncertain as to exactly where. That’s been followed by a salmonella outbreak stemming from pre-cut melons, which has sent dozens to the hospital. At least, in this case, the offending Indiana facility has been identified. The further we're removed from our food sources, the likelier we are to experience such problems. Just as the location of a social media post is easy to obscure, consumers are generally clueless about where their food is grown. Marketing boasts on packages regarding the healthiness and cleanness of foods rarely reveal the actual conditions of farms. The true environmental impact of agriculture is largely hidden. Considering our EPA chief is more concerned about moisturizer and fast food than protecting the environment, chances this will change anytime soon are negligible.

And so researchers from the University of Oxford decided to look into the environmental impact of 38,700 farms and 1,600 processors in 119 countries. Using five metrics—greenhouse gas emissions; water and air pollution; land and freshwater usage—Joseph Poore, in the Department of Zoology, and Thomas Nemecek, in the School of Geography and the Environment (as well as the Swiss research institution, Agroscope), concluded what similar studies have in the past: a plant-based diet is best for the planet’s health.

As Poore said of their research:

A vegan diet is probably the single biggest way to reduce your impact on planet Earth, not just greenhouse gases, but global acidification, eutrophication, land use and water use. It is far bigger than cutting down on your flights or buying an electric car.

Even low-impact animal-based foods, such as grass-fed beef, are responsible for more environmental damage than plant foods. Poore switched to a vegan diet four years ago when his research began. He believes using animal products is not sustainable for the world’s 7.6 billion (and growing) population.

The simplest intervention is to eat less meat and consume less dairy. The notion that humans are going to abandon them entirely is unrealistic, save a catastrophe. Poore also suggests that package labeling include environmental impact messaging, just as we have nutrition labels, as well as taxing meat and dairy. This might influence consumer decisions, especially with more people living in emerging markets that have increased their meat consumption.

Swooping down from the big picture, this eye-opening study measures the impact of 42 foods in the following nine categories.

Beef cattle farmer Raymond Palmer pictured with some of his grass fed Simmental and Charolais cows on January 9, 2015 in Lifford, Ireland. (Photo by Charles McQuillan/Getty Images)

Beef is the clear loser. It dominates the charts in land usage, emissions, and water and air pollution. Surprisingly, other livestock and crops use much more water: lamb, mutton, cheese, peas, and nuts turn out to be bigger water hogs. Farmed fish and poultry meat are major greenhouse gas emitters, with farmed fish drastically contributing to water pollution. The protein winners: tofu, eggs, grains, “other pulses,” and ground nuts, though the latter also consumes a lot of water in the process.

In the face-off between cow milk and soy milk, soy is the clear winner in all five categories. Of course, overconsumption of soy is its own problem. Nut milk is generally healthier, but we’re back to the water usage problem. The best solution would likely be to cut down on all milk consumption.

Rice is the big loser, which is not a good sign for most of the world. Maize, wheat, rye, and cassava are much gentler on the environment, while oatmeal and potatoes are somewhere in the middle. From a nutrition perspective, we don’t want to overload on starches anyway, so choosing the best place to get them is important—like, say, properly fermented, grain-heavy homemade bread.

Palm and soybean oils emit the most greenhouse gases, yet they score far below olive, rapeseed, and sunflower oils in the other four categories. Sadly, olive oil is the greatest offender. Palm and rapeseed oils emerge on top in all five categories.

Vegetable plants, pumpkins, potatoes, carrots and parsnips are pictured at the President Wilson market on March 14, 2018 in Paris. (Photo by Ludovic Marin/AFP/Getty Images)

Tomato fans will not be happy as their favorite veggie—the U.S. Supreme Court ruled it a vegetable, even though botanically it’s a fruit—dominates four of the five categories; only brassicas (mustard plants) consume more water. Onions, leeks, and root vegetables get thumbs up across the board.

Berries score terribly in every category; only apples consume more water. Otherwise, berry production rivals beef production in many metrics. Bananas and citrus fruits are the apparent winners. Of course, moderation in consumption of these sugar-rich foods is necessary.

Entire European nations (and Californians) are going to be dismayed that wine negatively affects the planet more than beer—Germans and monks rejoice. That said, beer uses much more land in the growing of hops and grains.

Coffee fans have reason to celebrate. Dark chocolate fans, not so much. For those of us who enjoy both on a regular—daily—basis, we have some decisions to make.