The Matter of Einstein's Brain

Unique architecture may play a role in Einstein's creativity and ability to solve complex problems in physics. 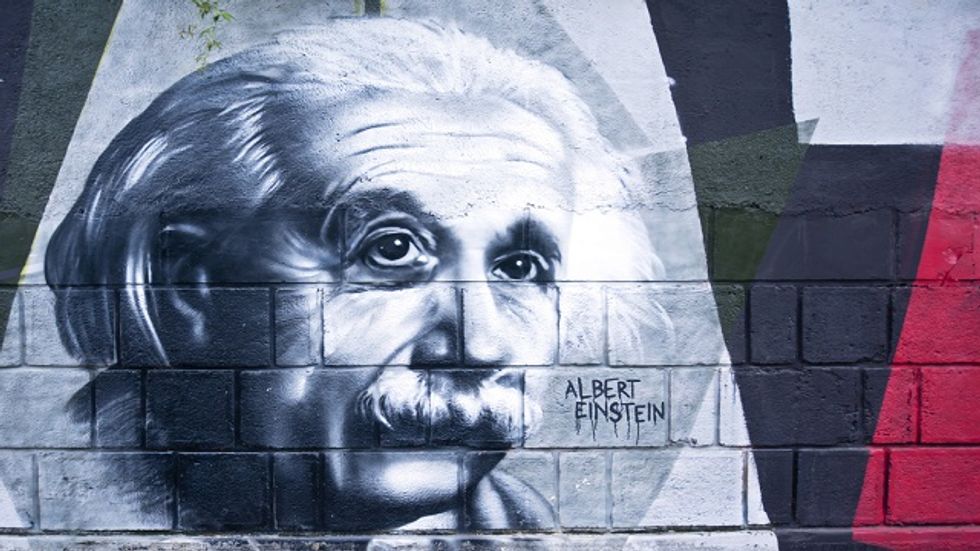 Neuroscience chatter this week has focused on a scientific celebrity--or at least, that celebrity's post-mortem brain.  After Albert Einstein died in 1955, he donated his brain to science.  It was then sliced into 240 blocks and distributed to nearly two dozen researchers.  Many of those specimens were lost, somehow, someway in the years since.  But several photos, taken from multiple and unique angles before the brain was dissected and sent off into the world remain.  And some scientists are attempting to try to understand Einstein's unique brand of intelligence by studying those photographic artifacts.

Earlier this month, Dean Falk, an anthropologist from Florida State University, and colleagues published a paper in Brain about some interesting anatomical features of Einstein's  cortex, based on the photos.  By comparing Einstein's brain with 85 other brains, they found a few peculiarities.  One, despite Einstein's extraordinary intelligence and cognitive abilities, his brain, at only 1,230 grams, was remarkably average sized.  This seems to fly in the face of the old notion that "bigger is better" when it comes to the cortex and intelligence.

But more interesting to Falk and her colleagues was the unusual topography of Einstein's cortex.  While everyone has folds in the brain--sulci, or depressions in the brain, and gyri, or ridges--Einstein had an usually high number of folds and grooves.  And those observed were "exceptionally complicated in their convolutions."

Falk suggests that unique architecture may play a role in Einstein's creativity and ability to solve complex problems in physics.

Of course, this isn't the first study to look at Einstein's brain.  There have been a few others.  And one in particular, now more than 30 years old, is of great interest to me.

Back in 1975, Marian Diamond and colleagues, published "On the Brain of a Scientist:  Albert Einstein," in Experimental Neurology.  This particular study was actually based on some of the pathological samples of Einstein's brain--not just photographs.  In the study, they counted the number of neurons and glial cells, or non-neuronal brain cells that help provide support and protection for the neural cells in a few different regions.  And they found something very curious.  In Area 39, part of the parietal cortex thought to be involved with language and complex reasoning, Einstein had a much lower ratio of neurons to glial cells when compared to 11 other brains.  Simply stated, Einstein had more glial cells for every neuron in this brain region than other folks.

Why is this so interesting to me?  Because one of the "transformative" new research lines that stood out for Nora Volkow, Director of the National Institute of Drug Abuse (NIDA), at this year's Neuroscience 2012 conference was our changing understanding of glial cell function.

She mentioned that different presentations at the conference discussed how glial cells can "prune" or "clean up" excess synapses and also that they can be primed to produce early genes associated with learning processes.  "We are learning they do much, much more than we once thought," she said.  "Not just neurons can produce changes to behavior.  Glial cells have receptivity to stimuli, like to stress and drugs, and that can affect behavior."

Given Einstein's excess of these cells, it makes me wonder if glial cells might play a role in intelligence and problem solving as well.

Diamond's paper suggested that Einstein's low neuron-to-glial-cell ratio might indicate that Einstein's brain just needed more energy--the glial cells were feeding his intelligence and conceptual abilities.  Perhaps he was simply a more efficient thinker because he had extra metabolic resources always at the ready.  Or maybe, now that we're learning glial cells have more "executive function" than once thought, those extra cells gave him cognitive advantages in other ways.  It's an interesting idea--and one I hope will be pursued moving forward.

Of course, there's only so much we can take away from photographs and post-mortem samples--and any anatomical difference observed even in the brain of someone like Albert Einstein is born from a unique combination of nature and nurture.  Still, I find this line of research fascinating.

What do you think--or hope--we can learn from studying the brains of our great thinkers?

Daydreaming can be a pleasant pastime, but people who suffer from maladaptive daydreamers are trapped by their fantasies.