Can We Quit It With the "Right Brain, Left Brain" Stuff Already?! 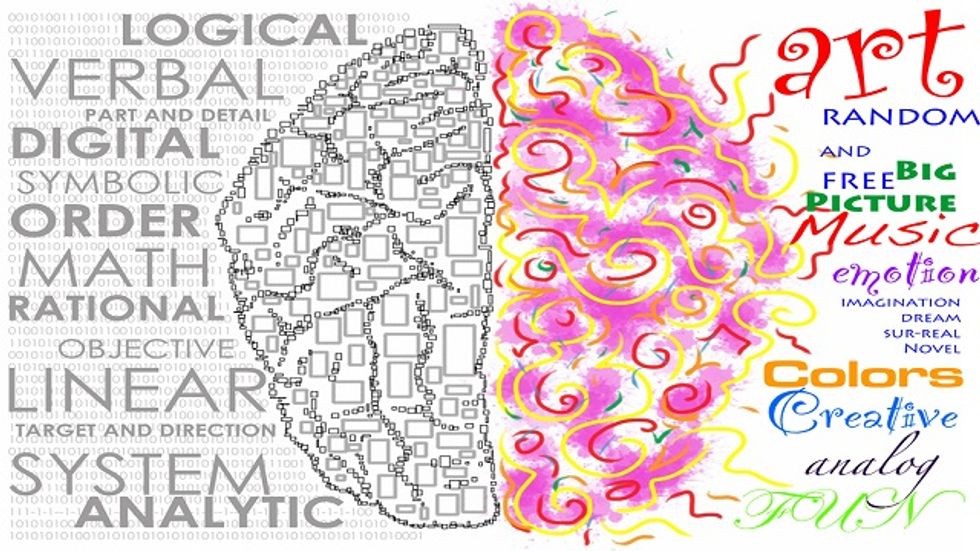 My eighth grade art teacher was the first to introduce me to the concept of "right-brain thinking."

He brought his copy of DRAWING FROM THE RIGHT SIDE OF THE BRAIN (at that time a new bestseller poised to change the face of education) into the classroom to share with us.  And he used the ideas contained within to try and help us become better artists.  From the get-go, he was a big believer in the idea that the right side of the brain housed our creativity--and by letting our right brains do the brunt of the work, we could become better artists.  My greatest handicap in art, apparently, was being way too much of a left-brainer.  (As an interesting aside, he is still talking about this book in educational workshops as of 2009).

Over the past 20 years, this "left brain/right brain" dichotomy has become part of American popular culture.  And the idea has gone beyond explaining different learning/teaching styles. There is now a pervasive notion that the two hemispheres of the brain facilitate different kinds of thinking, different kinds of personalities.  Left-brainers (like me) are logical, formulaic and very analytical.  We're the types that look at the parts instead of the whole.  Right-brainers, on the other hand, are more of your intellectual free spirits, using a more random, holistic and subjective learning style.

You see this idea heralded in teaching workshops, highlighted in news articles and bestselling books, and even splashed up on Facebook timelines (usually with fun, colorful graphics).  You can take all manner of online quizzes to see just what side of the brain you most depend on in life, suggesting your particular reliance will explain who you are and how you interact with the world around you.

Right-brain/Left-brain is an easy cliche--and a bastardization of the science.  Yet people are far too happy to accept the idea at face value and use it to generalize behavior in school, work and life.

Now, I'm not saying that individuals don't have different learning styles.  They do, of course, and understanding that can help teachers design better lesson plans across subjects.  But designating them as "left-brain" or "right-brain" doesn't make them any more valid.

The idea of left-brain/right-brain stems from research done by Roger Sperry and Mike Gazzaniga in the 1960's. The two looked at epileptic patients that had undergone a corpus callosumectomy, or a surgical procedure that severed the connections between the two hemispheres, to see how it influenced cognitive function and behavior. These are classic experiments, discussed in every undergraduate psychology class--and Sperry and Gazzaniga did show very interesting effects with language and images under strict experimental conditions.

But none of that work ever suggested that our abilities--math, verbal or otherwise, are limited to just a single hemisphere of the brain.  They did not then and they do not now.  In fact, neuroscience research makes a case for almost the exact opposite scenario.  Function is not tied to an area--it's the product of a distributed network of cells spanning the brain across lobes and hemispheres.  These circuits are shaped by a unique mix of biology and experience.  Trying to explain something as complex as a learning style by highlighting a single side of the brain is an oversimplification at best.  (Case in point, take the split-brain patient out of the laboratory, uncover the single eye or ear masked during the experimental paradigm, and you'll see someone navigating the world in a remarkably normal way).

Every few years, a new book or article plays up the idea of "left-brain" and "right-brain" thinking.  And we are once again bombarded with the idea that one hemisphere of our brain colors who we are and how we learn, no matter how much the field of neuroscience has advanced since the split-brain experiments were conducted.

It's time to give up this notion.  Real science demands it of us.