Robert McKee is a creative writing teacher known particularly for his "Story Seminar," a multi-day screenwriting lecture that he has given at venues all over the world. He is the[…]
Go to Profile 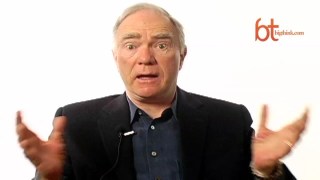 Writers Make Sense Out of Chaos

We spend more time than ever consuming stories. Do we need them more than we used to?

Question: Do you think our culture is getting better orrn worse at telling stories?

Robert McKee: Oh, in termsrn of the skill of executing stories, I would say we’re getting better.  rnThat’s one thing.  Okay, I think it’s clear.  For example, I mentioned rnthe series, “Damages,” and in fact there was just an article in New Yorkrn Magazine the other day about “Damages” and the brilliant way in which rnthat series does something that really has never been explored quite rnthat way before.  They use flash-forwards as hooks.  They give you rnglimpses of the future, but only glimpses, and so they put you in a rnstate of semi-dramatic irony.  You know more than the character knows. rnThe character’s going to die.  Okay, you know that.  This character is rngoing to die.  Then you go and flash-forward to the death, all right?  rnAnd now you watch... you go back and you watch them in the present.  So,rn you know what he doesn’t know.  You know he’s going to die, but you rndon’t know how or why he’s going to die.  And so, and you don’t know whorn did it, who killed him, and so forth.  And so there’s lots of hooky rnquestions and curiosity, but it’s also a bit of dramatic irony.  That’s rnamazing.

When you see it, you wonder why hasn’t this been done rnbefore?  So, in terms of executing stories, I would say that the rntechniques are better than ever.

In terms of the content of thern stories, that’s another question.  And in terms of what these stories rnare about, the depth to which they bring their characters, I would say, rnno.  The stories are more shallow overall.  And that’s a huge rngeneralization.  But post-modernism itself, by definition, means rnshallowness.  It means a satire of the techniques of writing.  Okay?  rnCalling attention to the techniques of writing, and that, of course, rndivorces you from the content by the very nature of it.  And so in this rnpost-post-modern world, or wherever we are now, I would say that as a rngrand generalization, that the content of stories are not the quality rnthat they were in the 50 golden years from the 1920’s to the 1970’s on rnstage, page and screen, every where in the world, especially the rnEnglish-speaking world, the films, the plays, and the novels of that rnperiod were magnificent in content.

And so we’ve learned to be rnmore clever, more experimental, and more skilled, often, in the telling rnof stories today, but I can’t say that the content is what it used to rnbe.

Question: Are you optimistic about the future of rnstorytelling?

Robert McKee: I never lose faith in rnstory, film may come and go as an art form, and art forms have come and rngone.  Opera, more and less, came and went and then just gets revived rnendlessly.  There’s very little cutting edge opera today.  There are artrn forms that rise up and dominate a period of time in human history and rnthen recede.  And so film goes though that and recedes.  So what, rnbecause there will always be story.  And the medium of the future, I rnthink, is television.  But certainly the novel and the theater is still rnalive and well, for the most part, despite some pretty mediocre rnstorytelling.

And so, the art of storytelling, the art of rnstory, I never worry about.  People will always tell stories and they rnwill tell really great stories and beautiful stories.  But the medium ofrn the future, the medium that writers choose to do what is the best work rnin the future that changes.

Human beings... a great critic saidrn once, Kenneth Burke said, “Stories are equipment for living.”  Human rnbeings need storytelling in order to make sense out of life, in order torn live as well and civilized as a human being can. And so they will go torn the storyteller for meaningful emotional experiences that they cannot rnget from life, and then it’s just a matter of which medium the rnstorytellers of the future choose to dominate that period in time, and rnthen that too will change in time.

Question: rnDo we need stories more today than we used to?

Robert rnMcKee: The time that people spend in stories created for them by a rnstorytelling artist today compared to 50 to 100 years ago, it’s triple rnor quadruple what it used to be.  Do they need it more?  Maybe.  You rncould make an argument that the disintegration and relativization of rnvalues in contemporary society is so blurring that people desperately rnneed stories to help them make sense out of life because what we are rnused to agree upon nobody agrees on anymore.  Society is, it’s obvious, rnbut is so splintered and so split.  I mean, there’s a spectrum that runsrn from "I am my brother’s keeper" to "Every man for himself" and we call rnthat liberals, and on the right conservatives.  And this argument over rnare we our brother’s keeper, or is it every man for himself, has never rnbeen more ugly and fragmenting of society.  And so people are clusteringrn now, depending on their position on that spectrum, of caring or not rncaring in such ways that they cannot even talk to people who are rnanywhere else on that spectrum.

And as a result, there is more rnchaos in daily life and then throw in the great recession and a few rnother chaoses like wars, and people are desperate.  And they need rnstory.  Yeah, I think you could make an argument.  Now, are they gettingrn the quality of stories, comic or tragic, that would help them live rnthrough this really ugly period in history?  Probably not.  But the rnwriters do their best.  Because the writers are just citizens too, you rnknow? And they’ve got no necessarily more philosophical, psychological rninsight into this than anybody else. So the writer has to be a rnphilosopher of a kind today that they’ve never had to be before.  They rnhave to make sense out of a kind of chaos that no one ever confronted rnbefore.  I mean the worst thing that, you know, a hundred years ago, andrn the worst thing that could happen is that you die.  So, people told rnstories about how to live well, live meaningfully if you could, or rntragedy.  But death was the worst thing.  Well, there are far worse rnthings now.  Far worse things.  And people are literally in living rnhells.  They’d be better off dead, all around the world.  The suffering rnin the Third World today is of an extreme that the Third World has neverrn suffered before because, generally speaking, in the Third World people rndidn’t starve to death, they could farm.  But even that in many ways hasrn been lost and for a lot of reasons.  But yeah, the world is in a worse rnstate than I know from history, and people would probably say, the Blackrn Plague was the worse.  But I don’t think so, because people understood rnthe Plague: You get sick and you die.  Who can understand the banking rnsystem?  Who can understand love?  Who can understand parenting?  I meanrn these are things people thought they knew; they don’t know anymore.  rnAnd so the Plague at least was clear.  It was terrible, but it was rnclear.

The problem for people today is confusion in a world rnthat should make sense.  In a world in which you have more communicationrn than ever, makes less and less sense than ever.  And so you need rnstorytellers to make sense out of that chaos, but it’s as I said, it’s arn chaos of a very different kind today, and the writer struggles.
Up Next