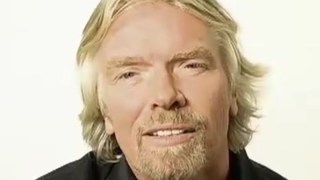 Well, I was fortunate to be brought up by two very loving parents, and they were great believers in bestowing a lot of praise upon their children, a lot of encouragement. And I think that gave me a lot of confidence.

And they also – particularly my mother – very much wanted us to stand on our own two feet from a young age. To the extreme case of pushing me out of the car at age six and asking me to make my way home, about three miles from home, and myself getting lost. But anyway, that was the kind of thing she would do to try to get us to not to be too “coddled,” as she would put it.

So I think the upbringing, a combination of love, and encouragement, and a desire to see us doing things rather than watching other people doing things, helped me in the future.

Well at an early age, I didn’t know I was dyslexic at the time, but I am dyslexic. And therefore, when I went off to school, I found conventional school work hopeless. IQ tests, I would turn them upside down. And whichever way I turned them I couldn’t make sense of them.

I decided at a very young age that I needed to get out of this environment and carve my own way in life. And fortunately, I felt that I was strongly anti-Vietnam War that was taking place at the time.

I was very keen on the idea of students being able to have a voice, students to be able to try and change the, what I thought, archaic way that we were taught to do things. So I left school at 15 to start a magazine to try to change the world and put the world right.

And because I was dyslexic, I had problems with writing myself. So I had to get out there and interview a lot of very articulate people in order to compensate for my dyslexia. And I think, dyslexics do look for ways of compensating their weaknesses and can excel in other areas instead.

Well, I suppose I am a bit of an adventurer. I love adventure on a personal sense. I’m an entrepreneur. I love challenging myself and challenging the people around me and seeing what they’re capable of. I love it when somebody says something’s impossible. It spurs me on in trying to prove them wrong.

What is your counsel?