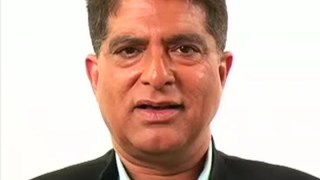 Born in New Delhi, India, Chopra describes how he developed his interest in yoga and the Bhagavad Gita.

Question: Where were you from and how did that shape you?

Deepak Chopra: I was born in New Delhi, India.

I think where you’re born brings a history with it – a cultural history, a mythical history, an ancestral history, a religious context – and certainly influences your perception of the world and how you interpret everyday reality.

It shapes my reality, where I was born, in two ways. One, I was burdened by the culture I was born in. And secondly, it gave me a context with which to actually see with wise eyes as well. So culture is both a burden as well as an opportunity for us to look at the world through eyes of wisdom.

Question: Who influenced you when you were young?

Deepak Chopra: As a young person I was influenced by my parents – mostly by my mother, who was a great story teller.

I was also influenced by the political environment of our country that has just gained freedom from British colonialism. And the seminal figures in that environment were Mahatma Gandhi, who had been assassinated shortly after I was born, but nevertheless dominated the collective psyche of the country. And of course there were other statesmen who were very much part of the culture we knew as well as looked upon by society as leaders, and mentors, and people that inspires us to have a vision for idealism.

Question: What sparked your interest in the Bhagavad Gita?

Deepak Chopra: I heard about Bhagavad Gita very early in my childhood, from the age of five onwards. It was one of the earliest things I started to read when I started to read. And it was very much a part of my consciousness.

In the beginning, I saw the “Bhagavad Gita” as a text that was very classical, much like the “Iliad” and the “Odyssey” – a mythical saga that showed the eternal conflict between good and evil.

But much later, as I grew up, I realized that it was much more than that. It was an examination of consciousness and the desire of human beings and the quest that we have as human beings to understand ourselves; that it was a map, you might say, for exploring the territory that leads us to find out things about ourselves.

Who are we? Where do we come from? What’s the meaning and purpose of our existence? Do we have a soul? What happens to us after we die? Does God exist? Does God, in fact, care about us? How then, we get in touch with that source that we call consciousness? Is the consciousness behind our thoughts also the consciousness responsible for all the intelligent activity of the universe?

The “Bhagavad Gita” is actually a very good text for yoga – the yoga of love, the yoga of action or karma, the yoga of understanding of intellect, and the yoga of reflection and meditation.

I think it’s a very important map for understanding the nature of consciousness.

Question: What is yoga?

Deepak Chopra: The word yoga is the same as the English word “yoke”. So in the New Testament when Jesus Christ says, “My yoke is easy and my burden is light,” my interpretation is that he’s referring to yoga. It means “union”--Union of the body, mind and the spirit as one continuum of consciousness.

Question: How is the Bhagavad Gita relevant to everyday life?

Deepak Chopra:I think the Bhagavad Gita is about both the forces of light and the forces of darkness that exist within our own self, within our own soul; that our deepest nature is one of ambiguity. We have evolutionary forces there – forces of creativity, and love, and compassion, and understanding. But we also have darkness inside us – the diabolical forces of separation, fear and delusion. And in most of our lives, there is a battle going on within ourselves between the sacred and the profane; between the evolutionary impulses and the destructive tendencies that we have; between creativity on the one hand and addictive behavior on the other hand; between the divine and the diabolical; between the light and the shadow; between the sacred and the profane.

So the Bhagavad Gita is an understanding of this battle that we have in our consciousness that ultimately is played out in the battlefield that we call our physical bodies and physical universe.

So by understanding the dynamics of these forces within our own consciousness, and by beginning to harmonize our impulses with the evolutionary impulse within us, we heal ourselves. And in doing so, we heal not only our physical bodies, but our world. Because the world that we find ourselves in is a projection of both our personal consciousness and our collective consciousness.

Re: What is the measure of a good life?