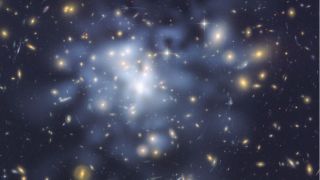 The Harvard scientist explains the daily work of a particle physicist and what problems lie at the cutting edge of her field.

Question: What do particle physicists do on a day-to-day basis?

Lisa Randall: So, particle physicists, we’re trying to understand the substructure of matter; what’s really out there, what’s at the core of matter, how it interacts, what are the fundamental forces.  And as you go to deeper and deeper scales you learn different things.  So the sort of two-pronged approach, we have some very theoretical work that goes on and some very experimentally oriented work.  We’re trying to see what we can find out at the collider that will turn on again next week, we hope.  The collider that will be running for the next couple of years, the Large Hadron Collider, that will collide together protons of high energy and tell us what’s out there.  We also try to combine it together with theoretical ideas we’ve been working on.  Some of them generated from more high energy theoretical ideas beyond what we can see with experiment and we’re trying to put those together.

Question: What insights do you hope the LHC will yield?

Lisa Randall: So, the LHC stands for Large Hadron Collider.  It’s large; it’s 27 kilometers in circumference.  It’s a big tunnel where two beams of protons will circulate around it and then collide at various points within the tunnel.  When it collides, it will collide together at high energy, about seven times the energy of the highest energy collider we have yet had on earth.  And when it does that, the idea is for the mass of the particles converts into energy.

The energy that’s created in the collision can then convert into new particles.  Those particles can have heavier mass than anything that’s been created before, E=MC2, so having bigger energy means that we can create particles that have bigger mass.  It also will have what’s called high luminosity, which is to say, there’s a high collision rate.  So the hope is that by having these new parameters, this high rate of collision, these high energies, we’ll be able to study matter in ways we haven’t been able to study it before.

In the process, we want to understand the answers to questions like; where do the masses of fundamental particle come from?  That might sound like an odd question since mass seems like an intrinsic property to matter, but it turns out that in the simplest versions of the theories you’ve ****, particles don’t have mass.  And we know that it’s actually only possible for particles to have mass because of something like a phase transition that happened **** universe, something called the Higgs Mechanism, named after the physicist, Peter Higgs, who thought of it.  And the idea is that particles at high energy might seem not to have mass, but at low energies they do.  And the question is; how did that come about?  If it’s a simple Higgs Mechanism implementation, we’ll spy something called the Higgs Boson.  It’s a particle that tells us that this is really what happens and really puts it all together.

The standard model works to an incredibly high degree of precision.  We believe that it’s right.  The standard model of particle physics tells us what are the basic elements of matter?  What are the forces through which they interact?  It’s been tested to a high degree of precision.  But it doesn’t answer questions like; where do the particle masses come from, the elementary particle masses come from?  And the other question it doesn’t answer is; why are those masses about the scale that they are?  Why aren’t those masses much bigger?  That has to do with something what we call the hierarchy problem of particle physics, which is connected to the question of why gravity is so weak.  And those are the types of questions we hope to answer at the LHC.

If we’re really lucky, we might also get some insight into dark matter.  The matter that doesn’t emit light that we know is out there in the universe.  So, there’s a number of questions that we hope the LHC might help us answer.

Question: What is dark matter?

Lisa Randall: As far as dark matter goes, we could be lucky in the sense that it seems that if you look at just the amount of dark matter that’s out there in the universe, we can figure out what is called the relic density is given a sort of type of interaction.  That is to say, how much stuff should be left over now that the universe is big and cool.  And it turns out that if particles had mass about the scale it’s going to be probed at the LHC, the Large Hadron Collider, that it turns out to have about the right relic density.  Now, this might be just a coincidence, or it might be something deep and fundamental telling us that the Large Hadron Collider might actually be able to produce the dark matter particle.  It might not produce it directly, but it could produce something that decays into the dark matter particles.  So there is some hope that by probing this energy, that the LHC will study, we can learn something about dark matter.