Laurent Dubois is Professor of French Studies and History at Duke University and a leading expert on Haitian history and culture. His books include Soccer Empire: The World Cup and[…]
Go to Profile 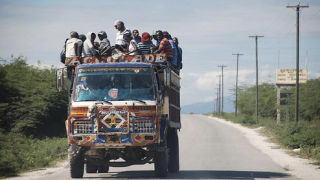 What We Must Know in Order to Help Haiti

Question: What cultural misunderstandings must other countries shed before they can truly help Haiti?

Laurent Dubois: I think a couple things. I mean on the historical front I think it’s just vital for people to know that this country you know is born out of a refusal of slavery, right, a refusal of a plantation slavery. This is a country whose workers, whose African slaves produced and enormous amount of wealth for France in particular and other countries as well and who essentially when they freed themselves essentially kind of transformed their country from one that had been producing a lot of wealth into one that didn’t have that same capacity simply because they were slaves. They were the producers of that wealth. When they decided to be human beings, you know free human beings rather than slaves they kind of were forced into a decision. There is a way in which that I think goes through all of Haitian history that kind of desire to refuse a certain kind of form of subjection and enslavement and people are rightly proud of that inheritance, which by the way, had a huge impact. You know it directly lead to the Louisiana Purchase. It kind of improved… It sort of expanded our notion of human rights in radical ways, so there is a kind of you know I think just a sense of the importance of Haitian history so that it’s seen as not as a kind of perpetual… a state of perpetual crisis, but rather also a kind of important historical force. The other really important misconceptions that come up a lot have to do with Haitian voodoo in particular, which you know is often described as a kind of religion that you know makes people that the… I think. David Brooks talked about it making people believe that life is capricious side. I’m not sure exactly the quote, but there is a kind of way in which people view Haitian voodoo, which I think people really need to educate themselves about the religion very carefully because it’s a very important force in Haitian society, and people are rightly sensitive about it being kind of misconstrued. It’s a religion that actually was born in the midst of slave revolution. It’s far from something that teaches people to sort of give up or not struggle. In fact, it’s really a religion linked to both collective and individual struggle and concretely on the ground in Haiti both Protestant organizations, Catholic groups and Voodoo churches are very important social institutions. They provide leadership. They provide community. They provide solace in a time like this, so a real good understanding of the religious landscape that’s sort of taken with an open mind I think will be extremely important for those who are working there.

How Haiti Can Rebuild