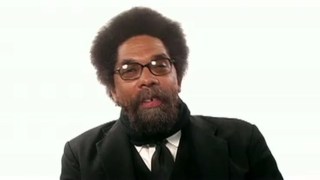 What to Die For

If we want a society that is truly great, we will need to avoid the panicky trappings and “moral constipations” of “success” and redefine life’s real questions.

Question: What is the counterweight to a world where wealth becomes blindness?

Now, I come out of the biblical tradition: he or she who is greatest among you will be your servant. What is the quality of your service to the weak? What is the depth of your love for all? Those are not cliché-like questions. Those are questions worth living and dying for, if you take a certain conception of what it is to be human seriously.

Question: What is Dr. West’s lesson to younger generations?

Cornel West: Well, again, from my story, with that power of love and power of pideia, power of love and power of education, I say to young people, always aspire to greatness. Have a habitual vision of greatness, that greatness has to do with a love for all translated into a justice for all, and to have a tremendous discipline in not just being educated, but in trying to critically discern some of the crucial forces at work in our society that contribute to social misery, social suffering, and so on. And then to have a vocation; to find joy in your vocation, find joy in the passion that you have. It could be being an artist, a painter, a musician, a lawyer, a pharmacist. Whatever it is, find joy that will sustain you so that you will be a long-distance runner, a marathoner, rather than a sprinter. And don't allow the market forces to so thoroughly seduce you that your aspiration for greatness becomes locked into just success, as we talked about before. And there's a hunger and a thirst for it right now.

So many, you know, folk are dealing spiritual malnutrition, brother, the emptiness of the soul, which is oftentimes inseparable from a moral constipation, where the good the right just gets stuck and you can't get it out. And you need a little ethical diarrhea to get the flow going. That's what we need now. A lot of people know what's right and good. They know that unfettered markets led to greed and all kinds of avarice and so forth. Just read the business page every day and you see people obsessed with the eleventh commandment: thou shalt not get caught. And more and more of them are getting caught. Scandals, over and over again. We now that's not right. But why do you do it? Why are you morally constipated? You think you can get away with it. No, you need a little flush-out, a little flushing out. And people change. You know, gangsters change.

Question: What specific texts should today’s youth be reading on these topics?

Cornel West: Well, I mean, they can go back to John Ruskin in the19th century, who talks about wealth and life and makes fundamental distinction between success and greatness. They can read Sheldon Wolin, my great teacher, on democracy -- Democracy Incorporated -- his fundamental concern about the kind of heroic efforts of ordinary people to push back elites in various kinds of ways over time. They could read Jeff Stout; they could read Judith Butler; they could read David Kim on melancholic freedom, what it means to wrestle with darkness but still have a sense of agency at a time in which it seemed as if social movements are bygone realities, and yet we still want to live a life with some integrity and be organized. There are a number of people who are thinking about these issues. Farah Griffin, Manny Marable; there's a number of -- I mean, one of the wonderful things about the American empire is, we've got a lot of brilliant people in it, and a lot of courageous people still here. The problem is, they just don't have the impact that they should, you see. And that's important. And I would tell them too, just at the point of being self-serving for you brother, look at Big Think; you've got some folk coming through, wrestling with these issues. No one of us has a monopoly on truth. And we certainly don't have a monopoly on beauty; all you have to do is look at me. No, I'm just kidding. But no one of us has a monopoly on truth, goodness or beauty. We're all making stabs in the dark, you know, and as a Christian, I'm just trying to love my crooked neighbor with my crooked heart anyway, as W. H. Auden put it.

Question: What recent texts do you find noteworthy?

Cornel West: Well, you know, at my age I tend to reread as much as I read, because there's just so many classic and canonical texts that I reread. I just reread Chekov's short stories, and I wish we could all read In the Ravine to see the depth of compassion and the analysis of greed and avarice in that great short story. Dostoyevsky's The House of the Dead would be another important point of departure in terms of what the world looks like from the vantage point of a marginalized people whose humanity has been overlooked, and yet the kind of resistances and responses they make, not in any way romantic or sentimental, but the level of engagement, the quality of mind that goes into writing The House of the Dead or In the Ravine by Chekov. Let me think. I love William Greider, of course. I love Barbara Ehrenreich. What's the most recent -- you know who I actually appreciate is Kevin Phillips, my dear brother conservative populist Kevin Phillips on the financialization of the economy, and his concern about the decline of the American empire and the comparative analysis that he makes between the British and the Dutch and the American empire. He tends to be a little bit more Gibbon-like than I am in terms of believing that the decline might be just irreversible; I'm not sure. He might have a strong point; it's plausible. I'm not thoroughly persuaded by it at the moment. But those are some recent texts that I have read that are noteworthy, I think.

How Intellectuals Betrayed the Poor