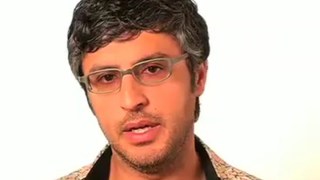 What do you do?

“I’d like to think of myself in some ways as a public intellectual.”

Question: Beyond a simple title, how would you describe what you do for a living?

Reza Aslan: I guess I’d like to think of myself in some ways as a public intellectual. I feel that as an academic, as a professor of religion, world religion and primarily a professor of Islamic and Middle Eastern studies, and as a Middle East analyst for the media, and as a fiction writer, and a teacher of creative writing at the University of California in Riverside . . . I feel like all of these three aspects of my life – which may seem as though they’re diverse and disparate – come together in this sort of one, self-conception that I have as an intellectual who wants to sort of bring ideas to the public realm.

Ideas of religion, and politics, and society, and art, and literature . . . the kinds of things that move us as a society, but which so often are enclosed in the vacuum of academia. What I really want to do is I want to open up that academic realm to everyone else. And it’s something that I think I’ve been fairly successful at because I think that there’s a great desire amongst people of all backgrounds, and all nationalities to take part in these pivotal discussions; but very few of them either get to do so or have the proper avenue of doing so.

Question: In the context of the great world religions, what is Islam?

Reza Aslan: Islam sees itself very much as part of the long Judeo-Christian, biblical, prophetic tradition with which most Americans are familiar. Muslims accept the Torah and the Hebrew bible in its entirety, as well as the gospels and the rest of the New Testament, as part of the self-revelation of God that comes from Adam, the first man, and according to Islam, the first prophet to Muhammad, the seal of the prophets. They see this as one, long narrative – a master narrative – in which the revelation of God, the self-communication of God, is passed down through the prophetic consciousness of one prophet after another, after another, after another.

And in fact, Islam takes this one step further and talks the concept called the Umm al-Kitab, the mother of books. This notion that exists in the Koran that all revealed scriptures – whether they be the Hebrew bible, or the New Testament, or whether they be the Bhagavadgita, or the Upanishads or the ___________ – all revealed scriptures are essentially derived from a singled source in heaven called the mother of books. And that God’s self-communication has been passed down to humanity not in its entirety, but in pieces.

And as the Koran says “deliberately so” for God could have as the Koran says “created one nation, one book and one prophet”; but He chose instead to create many nations, and many books, and many laws, and many prophets, “so that,” the Koran says, “the nations may know one another.” So there is this concept within Islam that all religions are inextricably linked to each other through this passing on of a prophetic consciousness. I think, to me, that’s a really beautiful way of thinking about religion. Now of course Muslims believe that comes to an end at the prophet Muhammad, but I think an argument could be made that the revelation of God did not stop with the prophets’ last breath. That God is ever-present and eternal, and that the human societies, the human nations that He made are in a constant state of evolution.

They did not come to a stop 14 centuries ago. So the real challenge, I think, for modern people of faith is to break beyond the outer shell of religion and to move towards the very core of what religion points to. Religion is a pointer. Religion is merely a signpost that points the way towards the divine. It’s the road that one takes to God. It is not God itself; but I think in the modern realm, particularly in the mothetistic traditions which tend to also be monomythic. In other words not only do they believe that there is one God, they believe that there is one truth, and then if there’s only one truth then there’s only one path to that truth, and it must be their path and therefore all other paths are wrong. I think that in that sense you’re worshipping a religion rather than worshipping with a religion is trying to tell you about.