Skip to content
Who's in the Video
Virginia Heffernan
Virginia Heffernan writes regularly about digital culture for The New York Times Magazine. In 2005, Heffernan (with co-writer Mike Albo) published the cult comic novel The Underminer. In 2002, she[…]
Go to Profile
Videos
Pokémon GO: How Augmented Reality Improves Our Experience of “Real Life”
Could Pokémon GO be considered art? Journalist Virginia Heffernan believes the game bears the hallmarks of great art — exploration, movement (of the soul or the soles), and a call to instinct.
▸
4 min
—
with
Virginia Heffernan

Strange as it seems, it may have taken augmented reality to open our eyes to the real world. Journalist Virginia Heffernan recalls visiting Massachusetts recently, following a Pokémon through the streets, when she looked up and noticed a plaque she’d never seen before. The game had pushed her beyond what she knew, and unlike most apps, invited her to physically venture outside the narrow confines of comfort, towards real-world discovery.

Heffernan is known for her view of the Internet as a work of art — and not just any work, but an unmatched masterpiece, the greatest achievement in human civilization. Like any great artwork, she believes apps and digital platforms act like great artworks by inviting us to take risks. And just like art, you can’t always explain why you like or are drawn to a certain piece or style — it boils down to a feeling. To instinct.

That sense of appeal and natural instinct plays a large part in the success games like Pokémon GO (which requires little onboarding to play, you just dive in) and platforms such as YouTube. Heffernan cites an early user of YouTube called Geriatric 1929, a former RAF pilot who felt an intuitive click with the video-sharing site the moment he stumbled across it. As a pensioner, for him it brought back the sensation of using radar and sonar in the war to communicate with invisible bodies in his heyday. He felt he had been waiting decades for the technology and it was finally here.

The Internet’s sweetest spots are the ones where you’re thrown into a current of excitement or commonality with thousands or millions of other people, diving headfirst into something that feels almost as involuntary to you as breathing. There’s nothing elite about it, it’s inhale-exhale; you play beside children, across class divisions, and above political opinion. “When I argue that the Internet is a work of art I don’t argue that it’s good for our health,” Heffernan says. “I don’t argue if it’s good for society, good for one of the parties or another, good for America, good for globalism. I argue that it’s art and art leads us to places, it changes us and asks for a willingness to be changed.” 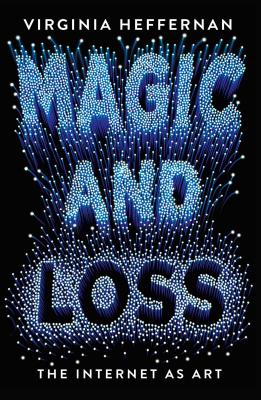 Virginia Heffernan: Pokémon GO has suffused my life. I'm the mother of two fairly young children, 11 and seven almost and they both took to it so quickly. And one of the features of any service or game that swamps our minds is that feeling that you've almost been waiting for it. Sometimes I think about Geriatric 1929, an early user of YouTube, who said when he first saw YouTube he had been an RAF pilot. He's a pensioner in England. He had lived in a state of depression having lost his wife remembering his heyday using radar and sonar during the war. And when YouTube first appeared it was like where have you been all my life? This is what I want to do. I want to be able to communicate with huge numbers of people through the ether. That doesn't appeal to everyone, but it appealed to many of us when we saw YouTube for the first time.

The same thing happened with Pokémon GO. You looked at it, and we've been on the brink of playing with what augmented reality might be for a long time looking at our phones, looking at maps and juxtaposing that with real life and toggling between an experience of looking at screens and looking at real life. And sometimes one is more compelling and sometimes the other is more compelling. Pokémon GO in juxtaposing its little creatures onto the world, it's almost as though, it is as though we've been like almost training for this in our dreams. The onboarding for Pokémon GO is so simple. There's so little to learn. At the same time I was learning that I was trying to play Magic: the Gathering for the card game and there was so much friction in my learning it. I knew that I would be part of a unique cadre if I learned it, and it's very complicated and esoteric, but I just kept getting thrown off the experience.

Pokémon GO, like other great services on the Internet, you're in before you know it and you're in with a lot of people. There's nothing elite about it. And I'm not sure I think that it's a socials good, it may be and you never know – when I argue that the Internet is a work of art I don't argue that it's like good for our health, I don't argue if it's good for society, good for one of the parties or another, good for America, good for globalism, I argue that it's art and art leads us to places, it changes us and asks for a willingness to be changed. And certainly kids and others that are venturing out into the world sometimes at night in strange parts - I was just in Massachusetts. I saw a plaque I had never seen before, the usual stories, but when people venture into that wide boundaries outside the narrow confines of where you're kept in a safe spot with other apps, Angry Birds say, you are going to take risks and art asks us to take risks, literally asked to move us from one place to the other exactly the way Pokémon GO has been moving us all over the world wherever it's released or wherever they're not trying to hack into it, all over the world to new places. And in that way I think it's a work of art. Whether it's a net gain for civilization remains to be seen.

Up Next
Hey Bill Nye! Can We Use Giant Magnets to Build a Space Elevator?
▸
2 min
—
with
Bill Nye, The Science Guy