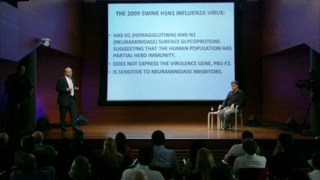 Paul Hoffman: I’d like to introduce our first presenter. He’s going to talk about influenza and swine flu. Peter Palese. He is the chairman and a professor of the department of microbiology at Mt. Sinai Medical Center, here in New York. Please welcome Peter Palese.

Peter Palese: I would like to discuss briefly influenza viruses and the disease which is caused by these viruses.

So the viruses are in RNA [ribonucleic acid] containing virus. So it has this genetic information RNA. And if you look at this particle, it has eight RNA segments so they are one in the center and one, two, three, four, five, six, seven RNA. These are like mini chromosomes which are the genetic information of the virus.

This virus also has a very important characteristic and that is, on the surface, it has spikes. And one can see this in the electron micrograph. They are spikes associated with this various on the surface, and that’s actually what the immune system when we get infected, sees. So these surface proteins are called the hemagglutinin and neuraminidase, so these are two proteins which are on the outside.

We should also understand that the virus is very, very small. A cell which is infected by this virus is much, much larger. Not only larger than this room but it’s probably as large as the Empire State Building. So we are really dealing here with a very small virus which can within 8 hours, infect us all and kill this Empire State Building and make about a hundred thousand new virus particles. So this is a virus which can cause a disease.

In humans, we know that there is influenza every season in the Northern Hemisphere from November to March. And also many people know that a hallmark of the virus is that it changes. And if you look here at the different influenza viruses which have circulated in the last century, we know about the 1918 virus, which was, in terms of number of deaths, a very important historic event because within probably three month period, from November 1918 to about February of 1919, in the US alone, about three quarter of a million people died. So this virus, 1918, belongs to what we call the H1 sub-type. It means that it has a hemagglutinin of this H1 sub-type.

And this virus was also replaced in 1957 by a separate virus, a different virus which has a hemagglutinin II sub-type and that sub-type was prevalent for about 11 years.

In addition to this there was also, in 1977, another H1 virus reappearing, and it turned out that it was very similar to a 1950 strand.

So in 2009, we have H1 viruses, we have H3 viruses circulating, and then in also an influenza virus. So the complexity of influenza is quite impressive that we have this co-circulating strand. And that explains why, for example, vaccines, which are very helpful, they are not perfect but they are very important way of preventing influenza, why vaccines have to have three different components. So for the last season, that means 2008 to 2009, we had in the vaccine formulation, three different influenza virus components; we had the H1 component, and this was an isolate from Brisbane, isolate number 59 and isolate in 2007; an H3 component; and an influenza B virus component, isolated in 2006.

Now that would be all very good if we could use these vaccines for several years. But unfortunately influenza also changes within, not only this major changes from 1918 to 1957 to 1968, but also within one of these H1 or H2 or H3; there are constantly changes going on. And that means, that the vaccines has to be changed as well.

For the 2009/2010 season, we have a vaccine formulation now which is being produced by manufacturers and there is actually a new strand and new influenza B virus. So for the season which will start in November of 2009, this is the new vaccine formulation.

So if we would only expect this three variance, we would be all happy. But what happened actually, in the end of March, April of this year [2009], was a new virus emerged and that was a virus which actually belongs to this H1 group, and is known as either the new swine virus, or the Mexican virus, or as the Mexicans call it, the American virus, the California virus. So clearly this is a new virus and I think the CDC [Centers for Disease Control] decided to just call it a new H1N1, H1 sub-type of the hemagglutinin and the N1 of the neuraminidase, the other surface protein.

So it’s a very complex chimera and was very, very unusual. If someone would have asked me, and I think most of my colleagues in the fields, what would be the next pandemic virus? [We] would never have guessed it would be an H1N1 virus and one with this curious origin, curious derivation, one [gene] from human influenza virus, two genes from an avian influenza virus and the remaining genes from a swine virus. So this is a sort of a very unusual. Nevertheless, this virus has a sort of hit hard.

This shows us of the influenza cases in the US. Without going into detail, this is the peak of doing the January/February where B viruses are the green ones, the yellow ones are A viruses and then we have these different H1 or H3. And then, very suddenly in April and May, we get suddenly this new H1N1 viruses. Usually, we do not have the second peak. It’s a virus which is unusually in every respect that it is an H1 virus and then it is also occurs so late in the season in terms of isolates.

And the virus is actually quite active. This is a couple of weeks ago, 105 countries have already have confirmed this novel H1N1 virus. And the numbers here of total cases is probably not a very good estimate, but clearly in terms of the total deaths number, this is not probably much higher than we would see with regular season influenza, but nevertheless this is something to be concerned about.

What is also quite unusual is that the immunity, namely that micro neutralization tests showed that for those 24 years and under, the seasonal vaccination does not produce cross reactivity. In other words, people who are young actually, and had been vaccinated, they have very little protection against this. On the other hand, people over the age of 60 has shown to have some pre-existing immunity which is able to neutralize this virus. So this is one of the few things where old age is really good, in terms of this H1N1 virus. So the older ones sitting around here and standing around here are much more protected.

And the reason for that is that virus, H1N1 virus is actually derived from the 1918 virus. So this is a 1918 virus, which gave rise to, on one hand, the swine virus, because the virus really vent into the swine population and changed here. And this is a 90% change in the hemagglutinin in the H1 sub-unit. And on the other hand, it also went into humans and we still have H1 virus, as you remember from one of the first sites. And here we were able to make this comparison and this shows us that this new swine virus, which is a particular one is the California virus, is actually fairly closely related to this 1918 virus.

And so if you look at the genetic distance going from here, let’s say 1940, you can see that this is much more closely related than to a virus which was in 2007, if the lengths here indicate genetic distance.

So that explains, because the origin of both of these viruses, swine virus, as well as the pure H1 virus, is a 1918 virus and that it was closer if people like me who had been infected in 1945, 1948. So we have more immunity against this new swine virus which has jumped into humans.

So that is basically what is happening. There are a lot of studies that are going on right now. But I want to leave you with three interesting characteristics.

The first one is that indeed this new pandemic swine H1N1 virus is an H1 virus. Meaning that we all have some cross protection, of course the older ones more, but there are still some of what we refer to as herd immunity. So we all have some kind of protection. So it is not like an H15, or an H9 or an H5, whereas none of us have any protective immunity against such a virus. In the case of this H1N1, there is some evidence that there is some cross protection.

The last point is that it is also sensitive to FDA approved drugs. So, I think, yes it is a pandemic virus which we should all be concerned about. But on the other hand, it is not something which has all the virulence change which we seen in other pandemic strands, and we all have some herd immunity against this virus.