Arianna Huffington is the co-founder and editor-in-chief of The Huffington Post, a nationally syndicated columnist, and author of fourteen books. Her newest book, Thrive: The Third Metric to Redefining Success[…]
Go to Profile 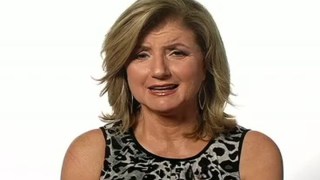 A conversation with the co-founder and editor in chief of the Huffington Post.

Arianna Huffington: The most important thing for Obama is to get healthcare right. I think that so often there are so many ancillary issues from executive orders, which is incredibly important of course, to infinitely less important things that consume his attention like having beer with the professor and the policeman. I think that the one thing that we are at such incredible danger of getting wrong is healthcare. So forgive me if I am being a little obsessed about it because it appears that they are willing to sacrifice the public option. If we get healthcare reform without the public option, we are really going to be missed a huge opportunity to really reform the system. With hundreds of lobbyists, many of whom are former members of Congress and former staffers, and lobbying really hard to kill public option, it will take an enormous amount of attention from the media and from the public to make people really clear what is at stake.

Question: Warren Buffett compared the stimulus package to taking half a Viagra. Are we neglecting the economy?

Arianna Huffington: Well, actually, I love the half a Viagra pill. My metaphor was it was like trying to jump across a chasm in two leaps. It doesn’t work. It definitely wasn’t bold enough and what is so tragic is that it is not so much that we have forgotten about the economy but that we think the economy has recovered. The Newsweek cover this week basically declares that the recession is over. It’s as though we are living in two universes; the Wall Street universe where Goldman Sachs and Citi are making multibillion dollar profits and the universe of real Americans who are losing their jobs, whose homes have been foreclosed at the rate of 300,000 a month, who are facing unprecedented credit card defaults, bankruptcies, and costs, the opportunity cost of what’s happening around the states with major cuts and so many services.

We thought we put Enron and WorldCom and everything behind us and here we are six years later and the financial system is still just as shaky and yet we are having a sort of victory dance on top of the system without any fundamental reform except the stakes are so much higher. Enron, WorldCom, you know, they were playing with billions of shareholder wealth. Now it’s costing us trillions of taxpayer money.

Question: Can Obama stand up to Wall Street?

Arianna Huffington: Well, Obama, I think, made a mistake in picking Larry Summers and Tim Geithner to lead his economic team because they are Wall Street creatures. Remember, Larry Summers was instrumental in the repeal of the Glass-Steagall Act which really would have prevented a lot of what happened and a lot of this creation of this too big to fail institutions. So It’s very important to recognize that this could become the Achilles’ hell of the Obama Administration’s policy towards the economy because if you look at the amount of money involved and the contrast between the budget deficit say of all the states, which is $166 billion, this is the cut that the states have to make, and you compare that with say the $4.7 trillion that we have spent bailing out Wall Street, $180 billion going towards AIG, you see that the opportunity cost is really unacceptable in the democracy.

Question: Has torture faded as an issue?

Arianna Huffington: No, I don’t think it’s lost relevance. I think a lot will depend on what the Attorney General, what Holder will do. He’s kind of telegraphed that he does want to have -- to open up an investigation into the Bush Administrations torture practices. A lot of the people who write about it constantly are staying on it, including Andrew Sullivan, and that’s very important. I think that’s one of the great things about what the online media that you can stay on a story and stay on a story and when the mainstream media moves on, we can actually keep covering it until something happens.

Question: Have you faced a moral dilemma in your career?

Arianna Huffington: I don’t think it’s an ethical or moral dilemma, it’s more about the constant guilt that I deal with being a working mother, being somebody who is really torn on a regular basis about the amount of time my work takes, which I love, and the amount of time that I want to spend with my daughters. It gets easier because my oldest daughter is now in college, but my youngest daughter is still in high school. It’s really a constant juggling act and emotionally I sometimes think that they take the baby out and they put the guilt in. So it is something that every woman I know who has a career and a family is dealing with.

The fact that we want to be great at both and the fact that we so often feel that we are not. So the judgments, the self-judgments, are so draining and I constantly talk about that with my women friends.

Question: Do Women Have Any Particular Advantages in Business?

Arianna Huffington: I think outsiders have advantages in business. I think people who can go beyond the conventional wisdom. People who don’t feel sort of captured by the way things have been done. I was reading, recently, a book called The Innovator's Dilemma and Christensen, the author, writes about how very successful companies often have a really hard time with new technologies, with innovations, because they have been very successful with all old technologies. The whole essence of an innovation is that it changes everything and we see that with newspapers versus new media. It has taken them a long time to recognize that consumer habits change and that technologies have changed the terrain. Now some of them are doing a very good job online, like the New York Times, like the Washington Post, but in the process there was a long delay. Now that the legacy costs are really burdening them with what they are doing.

Question: What are we missing?

Arianna Huffington: What keeps me up is that we are missing a lot of warning signs. I was in Italy recently and went to Pompeii. It was fascinating to see a city that was destroyed by a volcanic eruption and that had missed a lot of signs. I mean there are a lot of signs that something was wrong: there had been an earlier earthquake, dogs were running away, birds were not singing, water was not flowing, and yet somehow people went on about their business. I have that sense of foreboding and I’m really, by nature, an optimist so I don’t like feeling that way,

There are tremendous warning signs about what’s happened in this country to millions of Americans. I mean what has happened to the middle class? It’s not just that we have over 35 million people in poverty. It’s that 10 million people are going to be added to the poverty ranks from the middle class. Now that’s an amazing, amazing development. It means that families with children are going to have to leave homes—they are leaving homes now, moving into motels or moving into homeless shelters. What are we doing by not moving that to the forefront of our agenda and our preoccupations?

Of course healthcare is a big part of it, because half of the bankruptcies in this country are because of healthcare costs. Not looking and not listening to warning signs that are there is what keeps me up at night.

I don’t want to sound like a Cassandra—because it’s not fun being Cassandra—but we all need to remember that Cassandra was right, and the cheerleading Trojans were wrong—and very dead—at the end.

What Keeps Arianna Huffington up at Night?