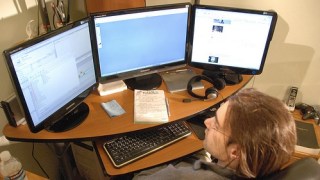 Twitter or no Twitter, our social networks are basically as small and close as they were in ancient Rome.

Question: Are the effects of social networks changing or rnaccelerating in the digital age?

Nicholas Christakis: Irn don’t think so, and I’ll give you the example that I usually give: The rnsize of a military company in the Roman Army was about 100 men. rnCenturion, right, led 10 groups of 10 men. They were Decurions that rnreported to him. Each one led a squad of 10 men and there was a company rnof 100 men.  It's the Roman Army. In the modern American Army it’s the rnsame, 120, 150 men in a company, little squads of 10 men. Well now why rnis that? I mean we have invented huge advances in communication. We havern telegraphy and telephony and radar and radio communication and the rnInternet... and yet the size of a working unit in the military is the rnsame as it was. We’ve grown in our ability to communicate with each rnother by many orders of magnitude and yet the company size hasn’t rnchanged. And the reason is that what limits the ability of human beings rnto interact with each other, or what permits it even, is not the rncommunication technology, but the fundamental capacity of the human rnbrain to form social interactions and to process social information. So Irn would argue that actually online networks and modern telecommunicationsrn don’t fundamentally modify the capacity of the human brain for social rnrelationships and therefore, while they might affect the efficiency of rninformation transmission and might have other sort of affects at the rnmargins, at the core it hasn’t changed.

And in fact, if you rnthink about this other example different from the Roman and modern army rnexample: talk to your grandparents and ask them how many best friends rnthey had when they were young. They’ll say they had one best friend and rntwo close friends. When you talk to your own kids now it’s the same. So rneven though my kids might you know Sebastian and Lysandra and Lena mightrn you know have hundreds of Facebook friend, those really aren’t real rnfriends. Those are acquaintances. The core social group hasn’t rnfundamentally changed despite this incredible new technology that is rnavailable. So I guess the way I would answer your question is to say rnthat while it is the case that these advances in communications are rnastonishing I don’t think they change our fundamental humanity. I don’t rnthink they change our desire to interact with others or our ability to rninteract with others, because I think those desires and abilities are rndictated more by our brain and our humanity, which hasn’t changed even rnas the technology has.

Question: Do Web media increasern the efficiency of information transfer?

Nicholas rnChristakis: No, I don’t think so. I mean think about Twitter. Like, Irn mean I don’t know how many Twitter followers you have, but you know if rnthey’re all tweeting three or four times a day and you have a thousand rnfollowers you’re getting 3,000 tweets. You are not reading those tweets.rn They’re not affecting you. And in fact, when we looked at like when we rnlooked at some of our Facebook networks we looked at the spread of or rnthe diffusion of tastes in books, movies and music in Facebook networks.rn We found that if anyone of these random acquaintances of yours rnexpresses a new cultural taste, it didn’t affect you. But people that rnyou appeared in photographs with that you tagged and posted onto your rnFacebook page. What we call your "picture friends" who might be your rnreal friends. So on average you might have 110 Facebook friends in our rndata, but you only had about six-and-a-half real friends, picture rnfriends, when one of your picture friends expressed a taste in a certainrn movie or music or book it did affect you, for some of them.

Onlinern interactions have enormous scale. You could have thousands of people rnyou interact with. Have tremendous specificity. You can target specific rnindividuals and find them in a way that was very difficult in the olden rndays. They have a kind of communality, a kind of collaborative feature rnthat was difficult to achieve in olden days, like Wikipedia would be a rngreat example. And they have what we call a virtuality, so for instance,rn if you’re a man you could have a female avatar. Now you could always rnpass as a woman in real life too, but it’s much harder in the real life rnthan it is in a virtual world or you can be a disabled person with an rnenabled body avatar for example, so there is a kind of way in which you rncan have social interactions online, which was very difficult, if not rnimpossible to have face-to-face. But despite all of that fundamentally Irn don’t think that these new technologies change human interaction.

Question:rn Will the Web ever fundamentally reshape our social interactions?

Nicholasrn Christakis: Well I mean ask yourself, I mean do you think that we rnare different in our sociality after the invention of the telephone as rnbefore? You know we’ve only had a telephone for a hundred years. Are we arn completely different species than the Victorians? You know, do we have rndifferent desires? Are we… No. And now can we communicate more rnefficiently, transact business and so forth? Yes. And what is also rnironic and we discuss this in the book is the ways in which when the rntelephone was invented and introduced all the same kind of concerns rnabout you know the spread of inappropriate information or people rnpredating on other people or the intrusiveness of the technology. You rnknow the quietness of the dinner hour would be interrupted by the phone rnringing off the hook. All of those concerns were articulated just like rnwe talk about the Internet now. And so completely acknowledge that it’s rnastonishing what the Internet offers. I just am not convinced that the rnInternet fundamentally is changing how we think or how we really rninteract with each other. It’s giving us additional ways of interacting,rn but I don’t think it fundamentally changes friendship, romance, love, rnviolence, all these very deeply human traits.
Recorded March 31, 2010
rnInterviewed by Austin Allen
Up Next

What Mastodon Hunting Tells Us About Networks