Aaron is both the visionary and technical mind behind Mint, the first free, automatic and secure way to manage and save money online. He designed Mint to meet his own[…]
Go to Profile 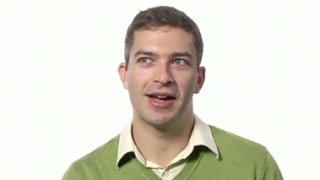 The Minting of Mint.com

Aaron Patzer was frustrated with managing his finances, so he created an internet tool. Two years later, it’s worth $170 million.

Question: How did Mint get started?

Aaron Patzer: Sure. So, I’ve actually started a number of businesses in my career. So I’m 28 currently, but when I was about 16 I started building Websites and that’s how I put myself through school. I went to Duke with a degree in electrical engineering, computer science, computer engineering and then to Princeton. And during that time when I was building Websites and putting myself through school, I was sort of comingling my person and my business finances, so I was using Quicken and Microsoft Money since I was about, well, 16 or 17 years old, so it’s been almost ten years or so.

And I was pretty religious about it. I would manage my finances as it were every Sunday afternoon for about an hour each Sunday, made sure all of my accounts would balance and then I was involved in another startup where I was working 80 to 100 hours a week and I didn’t open Quicken for probably five months or so. And the problem with a desktop tool is if you don’t open it up, it’s not updating your finances. It’s not pulling in the information. And once I did that it downloaded about 500 transactions and they were all uncategorized and it asked me to reconcile all of my account balances and it just seemed very tedious, like, why would you want to balance a checkbook in this modern day?

And then I decided there’s got to be a better way, an easier way, a faster way to manage your finances than spend an hour every Sunday afternoon doing it. I want a tool where people can get in and out in five minutes a week or less and it takes, like, ten minutes to set up instead of an hour to set. And that was the genesis of Mint.

The first thing that I did was come up with a categorization algorithm so that instead of seeing a big pie chart where most of the things are uncategorized, this algorithm knows that Safeway is a grocery store and Starbucks is a coffee shop and it’s smart. It actually knows about 20 million US merchants. And then I realized, “Well, that’s a nice feature, but it’s not a business.” And so, if the user knows where their money’s going that’s great because they spend less time. They can set budgets, they can see a nice pie chart of their spending, but as a company it means we know where their money is going and we can help them out. We can find better prices on the things that they buy most. Like, you spend $180 on phone, TV and internet. You could bundle it together. You have $20,000 in an old checking account that you opened when you were 17 and it’s just lying around not earning any interest. You’re paying all sorts of fees on it. There's a better offer out there.

And so, Mint’s business model became we’ll go for free and then we’ll find these savings opportunities for you. You know, better interest rate on your credit cards, when should you consolidate your student loans, when does it mathematically make sense to refinance your mortgage and Mint figures all that stuff out for you.

Question: How did you market Mint initially?

Aaron Patzer: Well, between the time that I created the alpha version and we actually launched, it was about a year and I did build up a team. So, I got financing and got some more engineers and some real professionals working on this. But, the marketing plan was whatever we can do, basically, for cheap or for free. So, probably nine months before the product even launched we started a blog, a personal finance blog, and we had some of our own content. So, we did this thing that we called train wreck Tuesdays. It was, like, people’s worst financial disaster. And somehow reading about other people’s financial mistakes makes you feel better about, you know, the mistakes that you’ve - you know, like, “Oh, other people really don’t get it either.”

And then we did sort of a “What’s in your wallet?” We would talk to either Silicon Valley sort of tech celebrities or personal finance bloggers and ask them, “What credit cards do you carry? What brokerage accounts do you have? Why did you choose these?” And that was an interesting segment. But, most of our content came from other personal finance bloggers and we would just simply crosslink back to their site. We got a lot free content.

And so, by the time we launched we had more traffic to our personal finance blog than our competitors who had beat us to the market, who had launched before us, actually had to their entire Websites. And then we added, you know, a “Send us your email and we’ll put you on the beta” because we building demand for nine months. We got about 20- 30,000 emails during that period which was too many. We couldn’t let that many people in all at once. So, we actually said, “Okay. We’ll give you special access to the beta if you put up a little badge on your blog or your Facebook page or wherever, that says, “I want Mint.” Just a very small, little badge and then we looked at all the people who had those embedded and what that did was it gave people sort of exclusive VIP access. Sort of like, you know, the velvet rope treatment at a club, but it got us free advertising on 600 different blogs and not only the free advertising, in some sense we got the boost in search engine ranking because Google actually looks at how many people are linking to your site in order to determine your relevancy and your popularity. And so, the more people who are linked to your site, higher its page rank and the better you’re going to do when people search for things like personal finance tool or budgeting software or whatever it may be.