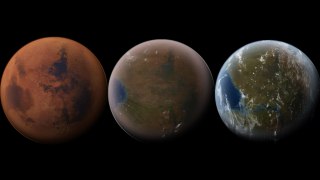 The Cheapest Way to Terraform Mars

Rather than hauling heavy atmospheric pumps from earth, the way to create a habitable atmosphere on Mars is to take advantage of its own topology, geography and nature.

Michio Kaku: Let’s be blunt.  It will take centuries to terraform Mars.  Mars is a gigantic planet, roughly on the order of half the size of the planet Earth. The key is not to bring pumps to the planet Mars because it costs too much money. The way to do it is to take advantage of Mars’ own topology, geography and nature.

So then the question is how do you jumpstart it?  A number of mechanisms have been proposed; greenhouse effects, hydrogen bombs, nuclear power plants to raise the temperature of Mars a little bit and that will then set off a chain reaction releasing even more carbon dioxide into the atmosphere.  That’s the cheapest way to take advantage of the carbon dioxide that already exists rather than hauling pumps and generators from the Earth to Mars.

Nuclear Power Is a Faustian Bargain