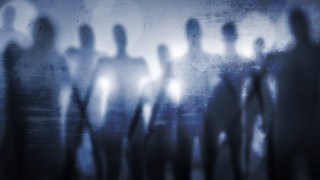 Michio Kaku on the Alien Mind

Michio Kaku on why Hollywood needs to make better aliens.

Michio Kaku:  I love to watch science fiction movies but I cringe – I cringe whenever I see a depiction of the aliens.  First of all the aliens speak perfect English.  Not just British English.  They speak perfect American English.  And obviously they’re a human inside some kind of monkey suit.  I mean we have Hollywood special effects, right.  So why can’t we get better aliens.  And then the aliens think just like us.  They’re territorial.  They want to conquer.  They want resources.  They want – they see humans as inferior.  But you see, that’s only a byproduct of our evolution.  Look at other animals in the animal kingdom.  Some animals are not territorial, okay.  They don’t have to conquer.  We have other paradigms in the animal kingdom which are totally different form the way our brain is constructed.  But when we look at aliens in the movies we’re basically projecting our own consciousness in aliens.  Our fears, our desires are projected and they are a mirror of who we are, not a mirror of who they really are.

For example, if we take a look at a bat or a dog, the dog’s brain is mainly interested in smells.  It’s swirling in a universe of smells while a bat’s brain mainly is concentrated on sonar, on detecting clicks and echoes.  Same thing with the dolphin brain.  Their consciousness is totally different from our consciousness because they see things differently than us because of their evolutionary history.  For example when we see a cat and the cat comes up to us and tries to purr next to us, we say to ourselves, “Oh, nice cat.  The cat is being affectionate.”  No.  The cat is not being affectionate.  It’s simply rubbing his hormones on you and saying, “I own this human.  This human is mine.  I’m marking my territory.  This human feeds me twice a day.  I’ve trained him.”

So a cat sees the universe totally different than we do and yet we impose our thinking on an alien.  Now on the question of intelligence.  If these aliens are more intelligent than us, how would they be more intelligent?  In the book I say that one of the main ingredients of intelligence is to predict the future.  The ability to simulate today so we see tomorrow.  And that requires a high level of intelligence to be able to understand the laws of nature, the laws of people.  What is the most likely outcome of a future event.  That requires intelligence.  If they are more intelligent than us they will see the future much better than us.  They will see outcomes that we cannot foresee.  They will simulate scenarios that we cannot even dream of.  They can outwit us every time.

Think of a safecracker.  A safecracker may have a low IQ, may have dropped out of elementary school.  But the safecracker can simulate the future much better than a cop can and that’s why he can rob banks and get away with it.  And so in other words, the criminal mind is not necessarily stupid because it has low IQ.  It’s quite well adapted for what it does.  And what it does is to simulate the future of a crime.  Now think about when we encounter intelligent life that is more intelligent than us.  They may see the world totally differently.  Their world may be a world of smells, a world of sounds rather than a world of eyesight like our brain is constructed.  And most important, they may be able to see the outcome of future events much better than us.  They’ll be able to actually run circles around us because they see the future.