The private sector may need the Outer Space Treaty to be updated before it can make any claims to celestial bodies or their resources.

Peter Ward
Peter Ward studied journalism at the University of Sheffield before moving to Dubai, where he reported on the energy sector. After three years in the Middle East, he earned his master’s degree in business journalism from Columbia University Journalism School. His work has appeared in GQ, Bloomberg, The Economist, and Newsweek. He lives in New York City.
15 October, 2019

PETER WARD: So the private space economy has emerged in the last several decades, I guess. But it's really increased in speed over the past 10 years, I guess. SpaceX and Blue Origin are the ones that are really making this go faster. You know, Musk's SpaceX is obviously launching rockets at cheaper prices than ever before, and that's allowing more people than ever to get into space. And that's probably the biggest pro of private space and the private space economy is that we're enabling more access to space. We're enabling people to do more things, more great things, which ultimately help us here on Earth.

Against that, there are some cons. Not everything is great when you launch in space. If you do it in the right possible spirit, then it's all fantastic. If we're going to the moon, if we're going to Mars, to better the species, then obviously that's a great thing for Earth. It's a great thing for humanity. But if you throw in capitalism and making profits, then sometimes the waters can be muddied. And that's not necessarily always a good thing.

The main form of regulation is a treaty, actually, that was signed in 1967. It's the Outer Space Treaty. And it governs what you can and cannot do in space, to a certain degree. So one of the major things it says is that no country can colonize any part of the universe. So you can't go to the moon and claim part of it.

So two years after that treaty was signed, America did go to the moon, and they planted a flag on the surface, famously. But they actually went to great lengths to explain that that wasn't something that represented that they owned any of that territory. It was merely a symbol of achievement, rather than staking any claim to the moon.

You also see a lot of websites where people are claiming to sell parts of the moon. And that's completely illegal, impossible. That's really just a piece of paper you're giving someone. So there is the Outer Space Treaty. And that is now coming up against private space. The worlds are kind of colliding. The Outer Space Treaty was written so long ago, before we even knew that private space was going to be a thing. So these private space companies that have grand designs that, you know, Musk wants to go to Mars and wants to build a settlement and a colony, he's going to run into the Outer Space Treaty at some point. He's not going to be able to do that without tackling this law that was signed by all the major space faring nations that says that nobody can claim part of another planet.

So how do you build a settlement without claiming part of that planet? And I guess another part of that is resource gathering. There is what America has already said that you can take resources from a place without owning it. So essentially, you could go to the moon and you could take hydrogen from below the surface. But you don't actually have to say that you own that part of the moon, and that in the Outer Space Treaty, there is an ambiguity, which America has come down on the side of no, you can go to the moon, take resources, and not own it. Luxembourg has also said that you can do that. But other countries have come out against it.

So the regulations that there are, they're butting heads against the emerging private sector and other plans of countries. And at some point, something's got to give.

To do anything in space, in the private space sector, you have to have a solid business plan, just like anywhere else in the world. So you have to be able to make money. And your biggest cost, obviously, is getting a rocket off — getting a ride or a rocket off the face of the earth and landing it somewhere and then carrying out an operation. Asteroid mining — some people don't take it so seriously within the industry, because it's incredibly expensive just to go to the moon, which is obviously a fairly standstill target, the moon.

If you're trying to land on an asteroid, put equipment down. Put some kind of automated equipment down. Take the resources. Take off from the asteroid. Bring it back to Earth. Your overheads are so astronomically high that there's almost no way you could make a profit unless you were taking something so far from that asteroid that you would sell it for an absolute fortune here on earth.

So I mean, the law in America that they said you can go to other places and mine resources and you don't have to claim ownership was backed up by the asteroid mining companies, which were very hot at the time of that law being signed. They pushed for it because I knew that the Outer Space Treaty was in that way, and they managed to push through a law just in America that says you can do it.

So legally, as long as they take off from America, they can do it. Whether they'll ever do it is another question. It's one of those weird ideas that we might never see come to fruition. 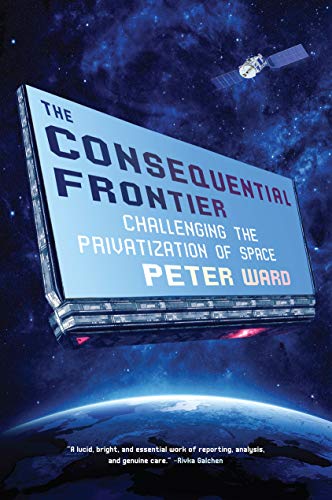