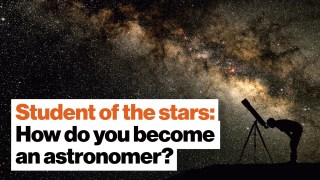 MICHELLE THALLER: There are a lot of people that are fascinated by astronomy, and they think, hey, you can actually get a job where it's your life to make new discoveries, to actually work with larger NASA missions. So how do you get this gig? How do you become an astronomer?

For some strange reason, I always wanted to be an astronomer, ever since I was a very small child. I think for a while I wanted to be an astronaut, and then I actually realized I was afraid of flying and I did not want to be an astronaut. But I loved space, and I could just never get the questions out of my head. I was told many times I didn't have the right personality to be a scientist. That really didn't matter at all. That turned out not to be true.

But here are some of the things that kind of need to happen. So if you want to become a professional research astronomer, one of the things you will have to have is a doctorate in astronomy.

Now, there are a lot of other ways to be involved in astronomy. I work with a lot of people who are engineers who help us build the telescopes or the instruments that we use. They, for the most part, do not have PhDs. They may have an undergraduate degree in engineering. Some of them have master's degrees. But usually, they actually start working in a more practical way, building the instruments, doing some testing. They start that fairly early in their careers.

But to be an astronomer, you do have to get a doctorate. So there is a fairly well-defined path for that. So you go through high school, and after high school, you can apply to any number of colleges that have degree programs in either physics, or mathematics, or computer science. Or, in some cases, they'll actually have full degree programs in astronomy or astrophysics. And these days, those two words, astronomy and astrophysics, are used fairly interchangeably in a professional setting. So if you're majoring in astronomy, you're basically a physicist majoring in things that are in the sky. So astrophysicist, astronomer, pretty much the same thing.

So what I did is, I actually did go to a university—I went to Harvard University—that had a major in astrophysics as an undergrad. And so we took pretty much all of the physics requirements for a physics degree, all the math that's involved in that, too, but then there were specialized classes in topics in astronomy. We'd read papers about the Big Bang. We'd get together and we'D go to observatories to learn how telescopes work. And there were classes in things like how does a star work, how does a supernova explosion work, what is a galaxy like?

And these really are physics classes. They involve a lot of math, usually calculus—figuring out how a galaxy evolves over time, how all the different stars work, how gravity affects everything. So there certainly is a good deal of math and physics involved.

But then, as you become a professional astronomer, while you certainly know the basics of that and you use that in your career, there's a lot more emphasis on being able to, interestingly enough, write. And so I think one of the things people don't realize is, don't just get all the physics and math that you can, also become very good at writing. And if you can, I think the most useful thing I did as a younger student—like high school and undergrad—is I joined the debate club. Because one of the things you're going to have to do is write proposals. Astronomers need funding and time on telescopes.

So let's say you want to use the Hubble Space Telescope, you want to observe something in the sky. The way that happens is that you—and not just you, a team of people together—will actually write a proposal to the Hubble Space Telescope and say, this is the object we'd like to observe, and here's why we think that's interesting, and these are the instruments we want to use, and we've done the calculations, this is how much time we need. And so you present this paper, basically. You send it in.

And once a year, astronomers from all over the world send their papers in to the Hubble Space Telescope, or maybe to the Peak Observatory in Arizona, or maybe the Keck Telescope in Hawaii. And those telescopes assemble a panel of experts, and these people, they may get many, many thousands of applications, so the panels may be huge—dozens or up to 100 different scientists go through, and they read all the proposals, and they rank them in terms of what they think are the best ideas. Who has the most dramatic idea, but they—you have to prove you can do it. You understand what's going on. You understand the telescope, what it can do. Maybe you've published other papers before, and you actually can reference that and say, look, I used this before, and I made some good discoveries.

So you have to be good at writing an argument. And now that I'm sort of on the other side of that, where I've been on panels that decide who gets time on telescopes, I can tell you I have read so many bad proposals, so learning how to write, learning how to make a case for what you want to do and having a really good narrative is a huge advantage in being an astronomer.

Some people have the idea of an astronomer being kind of a lone person, at night, at a telescope, just doing their own thing. And that's very intimidating. I mean, how do you know what to observe? How do you know what questions to ask?

When you are an undergraduate in college, you will probably start working with some of your professors as an assistant. They will actually have you help set up their experiments. They'll explain to you why they want to look at a certain type of star, or what sort of question that they want to answer. Maybe, as they write papers, they'll ask you to contribute something to the paper—write a section of it, write a description of an instrument that you're building, whatever.

And you start working with a group of people. And then, as you become a more senior student, going on past your undergrad, getting your doctorate, you meet people all over the world, at conferences that the university will send you to—and they'll pay for it. Don't worry, you don't have to have the money to travel—and you will meet people working on similar things that you are, and you'll start working together.

You'll understand what you want to observe because all these people have had more experience than you, and they'll take you along with them as sort of an apprentice. So it's never just you trying to think, off the top of your head, what should I discover? It doesn't work that way. There are always people there with you, and you're always working in groups, trying to get money and time on the telescopes, funding to support your time to analyze that data. And you'll work together on those proposals.

So eventually, what happens is, after you get your doctorate, usually you will take a-couple-year temporary appointments where you basically help with research. You do your own research. These are called post-doctoral research fellowships. And they can be a lot of fun, but they're temporary—they usually last about three years—and they don't pay very well, just enough to live on.

And then, if you're fairly successful as a postdoc, the next step is to get a permanent job, either at a university as a young professor, or at a large government laboratory, like where I work. I work at the Goddard Space Flight Center, which has about 10,000 people. And, of those, there are a couple hundred people that are professional astronomers. So some of these big government labs do hire many hundreds of astronomers at once.

Then you have a job. And you still have to bring in your funding to actually have time to do your work to actually make observations on different telescopes. So I get a government salary. And that's actually defined just by my seniority in the government. There is a very, very strict regulation as to how much government workers are paid, and that's what I get paid. But you still need to win proposals to support your time and actually sort of buy your time back from NASA to have time to work on your research. So in a way, you never stop asking for money, writing proposals.

I think one of the things that a lot of young people don't realize is that being a scientist is much more about that social aspect—writing, finances, budgets, plans, being able to work in a large group. Honestly, the thing I spend the single most amount of time on is attending meetings.

So yes, I do go out to telescopes, and that's wonderful. And you spend time working at computers. Of course computer skills are paramount, being able to analyze that data and discover things from it. But the most amount of time is looking for funds, trying to figure out how to work with everybody that's in your team, and getting organized, and then writing reports back to the people that are paying you to make sure that they know you're doing good work.

So I hope that gives you some idea. You can major in physics, you can major in astrophysics, you can come at it from more of a computer science specialist. But once you get your doctorate and then you become part of a research group, you're sort of on the path to becoming a professional astronomer. And this is something I have enjoyed—I'm now looking back on a career of more than 20 years—something that I enjoy to this day.