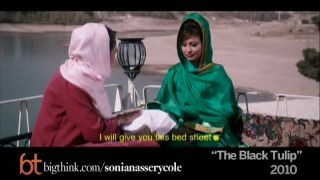 France has no right to ban the burqa, says the filmmaker. “If they want to wear a burqa, if they feel safe and beautiful that way, who is France to tell them what to do?”

Sonia Nassery Cole: The Koran is... the holy book of Koran has never been redone and rewritten, so it’s very open to different kind of translations, so people can just put their own translation to it, but the essence of Islam is the highest respect for women.  For example, in Afghanistan you very seldom in a hotel you’ll see a woman go and change a sheet.  It’s always the men and I asked this question.  How come the women are not the maids and cleaning up the rooms and all that?  Islam men would not like their sister, their wife, their mother to do that job to change the sheet of another man.  You call that strict.  I call that the highest respect for women.  They just want to keep their women protected, but not what the extremists are doing or talking about at all.

Question: Are ethnic codes more to blame than Islam for depriving women of their rights?

My mother is Muslim.  My father is Muslim.  My grandparents are Muslim from both sides.  I've never seen the kind of things that they are talking about as far as women in Islam is concerned, ever in my life and my family pray five times a day. But I've never seen any kind of...  My mother is a very powerful woman and she is just shoulder-to-shoulder with my father and worked with him all the time, even when he was a diplomat.  My grandmother was the boss of the house, so I don’t know.  To me it makes no sense.  Saudi Arabia, that’s a whole other culture that I don’t know much about and I don’t know what kind they are practicing, but you know there is a modernizing Islam in certain ways that some open-minded countries are seeing like that—like Afghanistan used to be, like Iran used to be, like Egypt you know Jordan. And there are some women they like it—they like to be covered up and that is their comfort zone, so that is fantastic that for them. But I don’t think that Islam itself says that kind of pressure on women that you just have to be locked up and cover yourself and you have no rights.  That just does not exist.  It’s the way they are translating it in certain places and regions in the world, again because Islam is a book that has not been modernized.

Question: Should France have banned the burqa?

Sonia Nassery Cole:  I think France has no right to do that.  I think women should choose.  If they want to wear a burqa, if they feel safe and beautiful that way, who are they to tell them what to do?  It’s a choice that they make.  They live in a free country as France, they could wear it or not wear it.  They are not forced by anybody to wear it. But if they choose to, I don’t think any country has a right to tell its citizens what to wear or not wear.