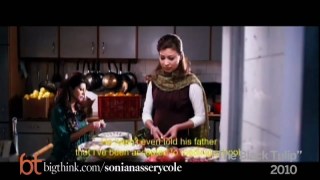 The absolute repression that women dealt with under the Taliban was all the more painful because Afghan women had previously enjoyed so much freedom. The filmmaker recalls pictures of her mother wearing mini-skirts and high heels and dancing in nightclubs.

Question: What rights did women have under the Taliban?

Sonia Nassery Cole: Well you all know women had no rights when Taliban came to Afghanistan.  What you don’t know is Afghan women had their rights before European women even knew what that was and American women even knew that.  A very sophisticated country in that sense that women who are working shoulder-to-shoulder with men...  women—there were nightclubs.  You know there pictures I have seen of my mom and her friends wearing high boots, miniskirts, dancing, you know, going to work with beautiful suits you know above-the-knee skirts, high heels.  The country went like 500 years backward.  That is the part that was really extremely upsetting for Afghan women because if you’ve never seen independence and freedom it doesn’t hit you so hard if somebody suppresses you a little bit further, but if you had complete freedom and It’s all taken from you it is a shock that it’s extremely difficult to absorb and but it was beyond that for me when I looked at my country at that time.

Question: How have women’s rights changed since the U.S. invasion?

Sonia Nassery Cole: Today slowly and slowly in Afghanistan... I mean in Kabul I should say in the suburbs it’s so very difficult, but in Kabul it’s changing a little bit. But once you go through a shock like that...  A lot of media ask me a lot about, “Well are you working on getting the burqas off their women?”  And my answer to that is the last thing that an Afghan woman is thinking about right now is does she have a burqa on or off.  She is worried about her life, about her safety, about her family’s safety.  She is... poverty is in the highest level right now.  She just cares about building a fire, making some rice and feeding her family.  The priority of having her burqa off or on is not on top of her agenda.

What we need to for women in Afghanistan is education, education, education, so they can stand up for themselves. And when I'm in Afghanistan I've never worn a burqa.  My mother never wore a burqa, neither my grandmother, so it’s not something I've ever seen before.  I shot the movie.  I made a statement about it.  I just refused to dress like that.  I wanted to be... one person has to start you know be the example of saying "It’s okay, look at me."  Okay, so I have a little scarf, sometimes it was on, sometimes it was off.  I wasn’t so paying attention to it covering my face and all that all the time and yes, I got some looks, but I didn’t care about it.  I just said "You know, deal with it.  I’m not going to do it."

Severed Hands and Kidnappings in Kabul