James Randi is the founder of the James Randi Educational Foundation (JREF). Randi began his career as a magician, but when he retired at age 60, he switched to investigating[…]
Go to Profile 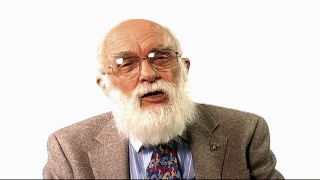 James Randi has shunned faith since he was a kid spending collection plate money on ice cream. “If my dad and mom are up there someplace… I ask them to forgive me.”


rnQuestion: As a “bright,” what do you believe?
rn
rnJames Randi: The term "bright" I don’t much care for, but hey, wern did the best we could with it.  I was with Richard Dawkins in rnClearwater, Florida and a few other people who brainstormed and came up rnwith idea of having the "brights."  I think I was maybe the third or rnfourth person to sign the membership roster.
rn
rnAnd a "bright" is someone who thinks logically and rationally; bases hisrn or her decisions on rationality, upon logic, and upon evidence—that’s rnthe major thing right there.  And if we don’t have evidence, we can rnexpress our belief or lack of belief in it, but it has to be rnprovisional.  I believe that this is probably true, though I don’t have rnany evidence for or against.  It’s a perfectly safe statement.  And so, rnbrights base all of their decisions and their beliefs on logic, rnrationality, and evidence.  That’s the thing in which they differ from rnthe average person who takes anything that comes along that looks rnattractive.  “Oh, I like that; I think I’ll believe in it.”
rn
rnQuestion: As the scientific picture of the universe gets weirder, rncould any religious claims ever be verified?
rn
rnJames Randi: Not that I know.  I am an atheist, tried and true.  Irn have been since I was, oh I guess about this tall.  I’m only about thisrn tall now.  And I made up my mind that I was going to investigate all ofrn these things and question them.  I went to Sunday school.  I was tossedrn out of Sunday school immediately.  But it gave me 25 cents that I couldrn have put in the contribution plate there, so when they pass the plate rnaround, and I found out that at Purdy's Drug Store, you could buy a rntwo-flavored ice cream sundae for 25 cents.  And that was a great rndiscovery of my childhood, I must say, and I took full advantage of it. rn My parents, bless them, never found out and I went off every Sunday rnmorning as if going to Sunday school, but I lied.  And I’m ashamed to rnadmit it now, and if my dad and mom are up there someplace, or down rnthere someplace, I have no idea, I ask them to forgive me.

Recorded April 16, 2010
Interviewed by Austin Allen
Up Next

The Danger of Crusading Atheists