David Gelernter is professor of computer science at Yale, chief scientist at Mirror Worlds Technologies, contributing editor at the Weekly Standard, and member of the National Council of the Arts.[…]
Go to Profile 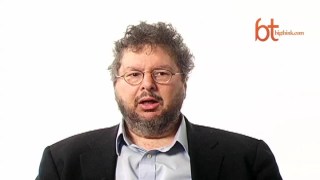 The Danger of Crusading Atheists

David Gelernter: Religion is increasingly suppressed among educated people. It’s not suppressed politically or legally, but my students at Yale as students in colleges across the country, have no concept of what the Bible is, or what’s in it, think of it as a toxic book, know nothing about Christianity, less about Judaism. So, at the same time, when the threats to human dignity and integrity are going to be ramped up to extraordinary levels of stress, where we most need wisdom, and moral seriousness, we’re seeing wisdom and moral seriousness come under attack and often from the same people who want to do the genetic engineering.

As crusading atheism is sort of a cause today, it is popular, I don’t want to say among scientists, I mean that’s too general and it isn’t so. But certainly prominent people in the scientific community, there are prominent people who are religious Jews or Christians in the scientific community, but there are also prominent people who have taken their atheism to the public, successfully, who are crusading atheists who preach atheism in an aggressive way as a consequence of science. They play on people’s weakness and ignorance insofar as most people don’t take the trouble to learn science; it’s easy for a scientist to say, “I’m smarter than you are because I know it and you don’t.”  You know, “I understand the genome and you don’t. I understand physics. I can do hard calculus problems and not just 12th grade level ones. So, you can see how much smarter I am than you are.” And when I tell you there are no more absolutes and religion is trash, and furthermore we ought to go ahead with human cloning, we should go ahead with genetic engineering and implants of all sorts which will smudge the line between human and machine, we’re getting into a moral conflict of interest which is tremendously dangerous.

I don’t think we will succumb. I think human beings have faced hard challenges. The Second World War was a difficult a crisis as mankind ever will face. Fifty million people died, humanity teetered on the edge. State paganism was preached aggressively by Hitler-ite Germany, which despised Christianity as much as it hated Jews; didn’t hate Christians as people, but it hated Christianity. The Japanese empire, which revived state paganism in preference to the more sophisticated religion of Buddhism and Christianity that had been popular in Japan. Stalinist Russia, which was an aggressively pagan nation, suppressed Christianity. That was a crisis. That was an enormous crisis and we rose to the occasion.  We defeated it. It damaged us, we still bear the scars. I think we’re going to face a crisis in the coming century that will be different in character.  Crises never—we never see the same crisis twice.  I know we have the moral strength to rise to the occasion, and I hope and pray that we do in practice.
Up Next