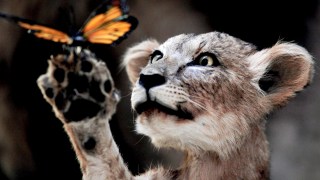 Is Animal Cruelty the New Slavery?

Do animals feel pain? Well, yes. Obviously. They may even feel pain a lot stronger than humans do.
▸
5 min
—
with
Richard Dawkins

It’s no small secret that we humans (apologies if you’re a dolphin reading this) kill a lot of animals. Mostly for food, sometimes for sport. But Richard Dawkins posits here that we are doing this—at least on an evolutionary level—for largely unnecessary reasons. He brings an interesting argument to the table: animals might feel more pain than we do. This might make you think twice before chowing down on your next Chick-Fil-A but it might also make you think twice about swatting that spider… or even disciplining your pup. Animals, Dawkins suggest, might feel things several times worse than we ever can, simply because their biological makeup is less advanced than ours. Richard Dawkins’ latest book is Science In The Soul: Selected Writings of a Passionate Rationalist.

If you want to erect a moral wall around our species and say, for example, that a human embryo, even a very beginning human embryo (long before it develops a nervous system) is somehow worthy of more moral consideration than an adult chimpanzee, then that is a rather un-evolutionary view point. If you look back in our ancestry, at what point would you draw the line?

Would you give... if there were Australopithecus—almost certainly our ancestor Australopithecus three million years ago—if you were to meet one if one had survived in the African jungle, would you give it the same moral consideration as the rest of us or would you say “No, no—that has the same moral consideration as a chimpanzee”?

If we look back in history a couple of centuries ago most people accepted slavery and nowadays, of course, that's a horrifying thought.

No civilized person today accepts slavery. And if you look back further still we had the appalling things that the Romans were doing in the Colosseum with spectator sport, watching people killing other people, lions killing people, regarding it as fun entertainment to take the children out to.

We’re certainly getting better, as Steven Pinker has said in his book The Better Angels of Our Nature, and Michael Shermer in his book on The Moral Arc, so we’re changing a lot and it’s sort of a fairly obvious thing to do to look in the future and say “What will our future descendants think when they look back at us the way we look back at our slave-owning ancestors with horror? What will our descendants look back in our time?

And I think the obvious candidate would be the way we treat nonhuman animals. My view would be that we want to avoid suffering; therefore the criteria would be “Can this creature suffer?” This is the criteria that Jeremy Bentham the great moral philosopher laid out: “Can they suffer?” There’s every reason to think that mammals, at least and probably many more, can suffer perhaps as much as we can pain.

If you think about what pain is for, biologically speaking, pain is a warning to the animal: “Don’t do that again.”

If the animal does something which results in pain, that is a kind of ritual death—it’s telling the animal, “if you do that again you might die and you might fail to reproduce.”

There’s absolutely no reason as far as I can see why a nonhuman animal, a dog or a chimpanzee or a cow, should be any less capable of feeling pain than we can, when you think about what pain is actually doing.

Pain feels like something primitive, feels like something like seeing color or smelling a rose or something like that. It doesn’t feel like the kind of thing for which you need intellect. And actually you can go even further than that—you might say since pain is there to warn the animal not to do that again, an animal which is a slow learner, an animal which is not particularly intelligent might actually need more intense pain in order to deter it from doing that again than a human who is intelligent enough to learn quickly not to do that again.

So it’s even possible that nonhuman animals are capable of feeling more intense pain than we are. I’m not sure how far I want to push that argument, but I think at least I could say there’s absolutely no reasons to suppose that they feel less pain than we do and we should give them the benefit of the doubt.

How diversity melts away our biases, and technology is the great equalizer