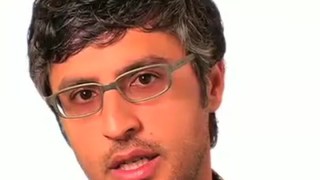 Reza Aslan says do not be afraid of the changes taking place in the world around you.

Reza Aslan: My advice to young Muslims living in the traditional Arab and Muslim world is do not be afraid of the changes taking place in the world around you. Do not be afraid at the fracturing of the Muslim world. Do not be afraid of the rise of individualism that is gripping you and your friends, and your neighbors and your community. Don’t be afraid at the way in which Muslim communities all around you are beginning to redefine themselves in nationalistic terms, more so than in sort of wider trans-Islamic terms. And don’t be afraid of technology. It’s inevitable. You are going to be evolving. You’re going to change. You’re in an interesting position right now to take advantage of what the world and the globalized economy has to offer. Do so. Take advantage of it.For my advice to people in the west with regard to the Muslim world is leave them alone. They’re perfectly fine. They’re perfectly capable of creating their own societies, their own cultures, their own democratic frameworks. They don’t need our help. They could use our financial help. No question about it. I think that we could do a lot more in investing in the civilian and democratic infrastructures of countries like Egypt and Iran; but the way that our foreign policy in the United States and in the larger western world has been almost single mindedly focused on our economic and security interest in that region, that has in some ways retarded the development – the social and political, and even religious development – of that region. “We’re not helping,” is what I would essentially say. But we can help. We can help by offering a platform and a venue for oppositional forces in that region, even if those oppositional forces are religiously inclined in order to express themselves and share their views, and their ideas within the larger marketplace of ideas; and to allow the Muslim world, and particularly these nation states, the citizens of these nation states, to make decisions for themselves about what kind of country that they want, what kind of government they want. We can’t simply shut down the democratic process if the people that we want to get elected don’t get elected. That’s not how it works. And so we have to understand that a process is underway in the Middle East. It’s gonna be a long process. It gonna be a violent process, and it’s gonna be a bumpy one. It’s gonna happen with or without us. It’ll happen more smoothly with our help; but that help has to come with the recognition that our sole purpose is to foster these kinds of reform movements, not to define them.