Paul Krugman is an author, economist, and Princeton professor who is probably best known for his op-ed columns in the New York Times.Krugman is the author of over twenty books,[…]
Go to Profile 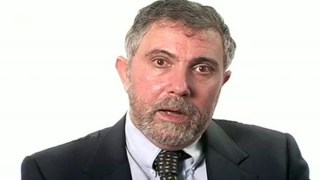 Broken is too strong a word, but there are problems.

Paul Krugman: “Broken” is too strong a word.  It’s not . . .  It’s certainly true that when the public gets fed up . . . really, really fed up with politicians they get turned out.  You know you can talk all you like about    . . .  I have a whole shelf of books written in 2005, 2006 about how . . . how the Republicans had a lock on power and it didn’t matter.  They had so many advantages.  And then comes the 2006 election and they get . . . they get tossed out.  So the political system is not broken, but it certainly is distorted.  You have enormous monetary influence of the lobbyists.  You have a lot of . . .  Very often people are not getting their views reflected.  Most conspicuously right now everybody . . .  Not everybody but a heavy majority wants out of Iraq, and somehow it’s not happening.  But also you can see we have something like, “Should hedge fund managers pay taxes like you and me?”  And it’s hard to think of any argument that they shouldn’t.  And yet even the Democrats in Congress are dragging their feet on closing that tax loophole.  And if you don’t think that has a whole lot to do with campaign contributions, you know, I’ve got a bridge you might wanna buy.

Question: How do we fix it?

Paul Krugman: Well the first thing just for the …, the possibility of voting fraud is just . . .  Although it’s not clear that it’s had a tremendous influence, the possibility is that it’s enough to be terrifying.  So I actually want a technological revolution in vote counting.  I think we need to use the cutting edge technology which is hand-counted ballots with lots of people watching the counting.  That’s the way that other countries have done it.  It’s you know . . .  The amount of money involved relative to the important of safeguarding democracy is trivial, so we should do that.

Public funding for elections.  Campaign finance reform, limits on contributions you can do up to a point.  But the fact of the matter is vast amounts of money have a way of flowing around any barriers you try to erect.  So there’s no real substitute for making sure the candidates can be adequately financed even if they don’t have big money behind them.