Budget cuts to pandemic preparedness put us all at risk.

Larry Brilliant, MD, MPH, is the author of Sometimes Brilliant: The Impossible Adventures of a Spiritual Seeker and Visionary Physician Who Helped Conquer the Worst Disease in History. Dr. Larry was Vice President of Google and Executive Director of Google.org. He is board-certified in preventive medicine and public health and co-founder of The Seva Foundation, an international NGO whose programs and grantees have given back sight to more than 3.5 million blind people in over 20 countries. Dr. Larry lived in India for more than a decade working as a United Nations medical officer where he played a key role in the successful World Health Organization (WHO) smallpox eradication program in South Asia. He currently serves as the acting Chairman of the Board of the Skoll Global Threats Fund whose mission is to confront global threats like: pandemics, climate change, water, nuclear proliferation and the Middle East conflict.

LARRY BRILLIANT: It's not a question of if we will have a pandemic, it's a question of when. The odds that something like that happens increases to the extent that we are not prepared that we do not increase our ability to find every case as soon as it jumps from an animal to a human, that we are not able to respond quickly by whatever means we have at the time. We won't have a vaccine or an antiviral on the first few days of a pandemic, so what we have to respond with is good public health. We have to be able to do isolation, social distancing, containment, messaging, all of those things. It is unlikely that that first case is going to take place in New York City or Chicago. It is likely that it will take place in a poor country at the periphery of the country far away from the capital.

That's what happened with Ebola, a perfect storm. The first cases took place at the border of three post conflict impoverished countries that didn't have a very good public health infrastructure. And they started asking WHO to send in teams and to send in resources it was right around the time of the World Health Assembly, which takes place in May. And the World Health Assembly had said to the WHO management that they had to find a way to cut their budget. And unfortunately the budget part that they cut was pandemic prevention, infectious disease control and immediate response to outbreaks. The net of that, the sad net of that is that it was six months before there was the declaration of an infectious disease of global significance, which is WHO's way of saying this is all in let's send everybody do everything we can do. We were on a trajectory to reach hundreds of thousands of cases. And CDC actually estimated that we were on a trajectory to reach over one million cases. Had not Obama and the U.S. jumped in with even military resources and sending them food - I mean Médecins Sans Frontières were heroes.

But I think here's the lesson for us right now in the United States is we have an administration that wants to cut the size of government and freeze hiring and not hire new people. We have to staff up for pandemic prevention. It is a low probability but a highly consequential event. These are the worst things to deal with.

I was at an event called the Renaissance Weekend a couple of years ago and we had just made a movie called Contagion. And I wanted to make a movie that really looked like what a real pandemic would look like and that's what Contagion was, the science was impeccable. So I showed this movie at the Renaissance Weekend and one of the most conservative Republicans in the country, part of a think tank that everybody knows, he spoke after me and he said, "I saw Contagion, I saw the movie. I realize now what a pandemic is like. I understand that government has got to be ready. So I've been telling people in the tea party, 'Cut, cut, cut, cut, cut the budget, cut everything. Cut cut, cut. Don't leave anything uncut.' And then I saw Contagion. And now I say something similar, I say, 'Cut, cut, cut. Cut everything except pandemic preparedness.'" There are a number of things which are highly consequential and very difficult to plan for and understand and we only can do that with government and with international agencies. The private sector, corporations and foundations can't do it. 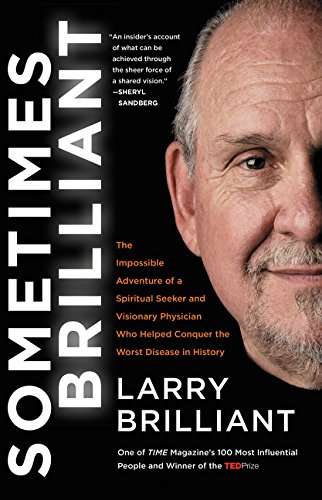 Sometimes Brilliant: The Impossible Adventure of a Spiritual Seeker and Visionary Physician Who Helped Conquer the Worst Disease in History
List Price: $16.99
New From: $6.21 in Stock
Used From: $2.00 in Stock