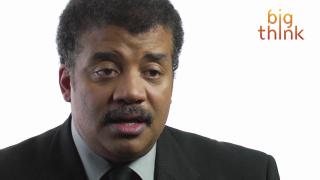 Neil deGrasse Tyson: Science Is In Our DNA

Neil deGrasse Tyson: I can’t think of any more human activity than conducting science experiments.  Think about it.  What do kids do, young kids, kids that can barely walk? What are they doing?  They’re turning over rocks.  They’re plucking petals off a rose.  They’re exploring their environment through experimentation.  That’s what we do as human beings, and we do that more thoroughly and better than any other species on earth that we have yet encountered.  It helps to have opposable thumbs, of course, and really huge heads with grey matter doing the processing.

We explore our environment more than we are compelled to utter poetry when we’re toddlers.  We start doing that later.  Before that happens every child is a scientist.  And so when I think of science, I think of a truly human activity, something fundamental to our DNA, something that drives curiosity.  They go together, the act of being curious and the act of wanting to do the experiment.

In nature when you conduct science it is the natural world that is the ultimate decider in what is true and what is not.  So what that means is, if I discover a scientific idea surely someone else would have discovered the same idea had I not done so, whereas, look at Van Gogh’s Starry Night.  If he didn’t paint Starry Night, nobody is going to paint Starry Night, so in that regard the arts are more individual to the creative person than a scientific idea is to the one who comes up with it, but nonetheless, they’re both human activities.

With regard to robots, in the early days of robots people said, “Oh, let’s build a robot” and what’s the first thought?  You make a robot look like a human and do human things.  That’s so 1950s.  We are so passed that.  All right, the Hubble Space Telescope is a robot.  We send it commands.  It turns one way, images the universe, sends the image back to me.  It doesn’t look like a human being.  It doesn’t smile.  It doesn’t have arms and legs.  So this notion that a robot might turn on us . . . that’s not the robots we’re creating.  Sky Net coming online and achieving consciousness . . . okay, keep doing the movies.  They’re fun, but I live in the real world, and in the real world that’s simply not the robots we’re making, and even if we did they would just be really good computers of things and they’d give me access to information.  Actually, I already have access to information -- it’s on my smart phone a few fingertips away -- from all gathered knowledge of the human species on earth.  It’s called the Internet.  I'm already there.  People talk about plugging it into your head.  I don’t need to neuro mechanically plug it into my head with a new brain USB port.  It’s right here at my fingertips already.  Thank you.

The Psychological Effect of China