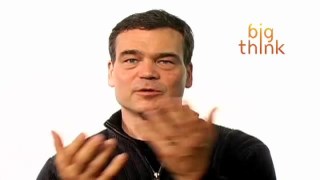 Digitization has actually made working on biographies more laborious. The sheer amount of material means that the process actually takes longer if you’re going to be thorough.

Question: Why did you decide to write a biography of Cornelius Vanderbilt?

T.J. Stiles: Well when I was working on Jesse James one of the big question that surrounds Jesse James's life is was he an anti-railroad Robin Hood, classic mythologies surrounding him states that he was. So I looked at the question of... questions related to the financial system during his lifetime, during and after the Civil War, the railroad system and found some really interesting things.

For example, when Jesse James robbed trains he wasn't robbing railroad companies, he was robbing express companies which rented space in baggage cars for messengers and safes. And they transported cash for banks along with valuables and other expensive high priority shipments. Well farmers didn't deal with express companies. They dealt with railroads with shipping their crops and they did resent railroads but they didn't care about express companies.

So, I thought this is a great way to go with my next book and then the question became okay so I have these questions, I have these topics, the rise of the corporation, the rise of the railroad. Who's an interesting person whose life speaks to those questions? Someone preferably who has not been written about too much before and Cornelius Vanderbilt presented himself. He was called the railroad king of 19th Century America and yet the last really serious biography of him was published in 1942 and it's necessarily dated - it's very good for it's time but, you know, its time is past.

So Cornelius Vanderbilt was not just a bookkeeper who took to investing in railroads. Again, he was a very physically dramatic figure and so he attracted me in terms of the storytelling as well as the big questions that defined his life.

Question: How did you research Cornelius Vanderbilt's life?

T.J. Stiles: Well I spent almost seven years on "The First Tycoon" and I learned why there had not been a series biography since 1942. No one hated himself enough to undertake the task. It was this process of finding sources that had never been connected to Vanderbilt before. He left no collection of papers behind. He did not leave behind this manuscript collection, The Vanderbilt Papers. And for that reason historians and biographers have sort of steered clear of him. He shows up in books about other subjects. There are no books about him virtually.

So I like to often say that historians are rather like the story of the drunk who, he drives home and pulls up into his driveway and gets out, and he drops his keys by the car. And his wife comes out and finds him on the porch on his hands and knees. And she asked what he's doing, he explains. She says, "Why aren't you out in the driveway looking for your keys?" He said, "The light is better here." And historians often will write about subjects who are not as significant as others but there's a big collection of papers.

There's a big manuscript archive they can work in that makes the job easier and more satisfying, and more complete. And they'll leave - sometimes avoid someone like Vanderbilt who is incredibly significant and yet he left no simple archive. So the process began with going though for example that 1942 biography, finding out what we do know exists. Starting with that, then starting to go off on tangents and to think about who else is connected to this person's life. Who else might have collection of papers. There are manuscript catalogs that are available and again the process of digitization began to pay benefits first with putting online the catalogs of manuscript collections. Being able to know what is where.

Then finding out about sources related to companies that he was involved in, you know, pursing the tangents and then giving myself time to get lucky, is the process eventually. And then finally there's the immense transformation of digitization and this appears primarily, not in manuscript material, letters and diaries, and whatnot but in newspapers and in public records. And there are, for the most part, proprietary companies that have been scanning newspapers and other documents and have been making them available with character recognition software so you can search them.

But these are only available to major research libraries. So a lot of my time is spent on-site an research libraries going through these - doing tech searches for Vanderbilt and other related words and actually the power of digitization actually adds time to the process because you pull up so many hits and some of them are false leads. I find out there was a lot of property for sale on Vanderbilt Avenue in Brooklyn in the 19th Century. And some of them are hits that are redundant, you know, 10 newspapers have basically the same report about the same thing, and there's nothing new there. And yet I would have to go though each one in case there's some nugget that I've missed.

So the very power of digitization is actually made research more laborious in a sense, both more convenient but also the shear amount of material means that the process actually takes longer if you're going to thorough.