On writing: What illuminates a story?

Don't be afraid to have the very experiences you aspire to write about — they will help you write more vividly, and from a genuine place of wonder.

Michael Pollan is the author of How to Change Your Mind and seven previous books including Cooked, Food Rules, In Defense of Food, The Omnivore's Dilemmaand The Botany of Desire, which received the Borders Original Voices Award for the best non-fiction work of 2001, and was recognized as a best book of the year by the American Booksellers Association and Amazon.com. PBS premiered a two-hour special documentary based on The Botany of Desire in fall 2009.

MICHAEL POLLAN: So this was an enormously challenging book to write. First of all, I knew very little about neuroscience. I knew very little about psychology, psychotherapy. And I had very limited experience of psychedelics. I had these mushrooms a couple of times in my 20s, but it was what people call a museum dose — enough to make the world sparkle, but not to lead to any kind of profound insights. So I was faced with the challenge of mastering a new subject, and I was faced with the challenge of trying these psychedelics because I realized I could not describe the experience strictly based on interviews with other people.

And that's how I work as a writer. One of the very important parts of my work is to find a way to have an experience that will illuminate the story. So when I wrote about food, I bought a cow and followed it through the food system, through the meat industry. And I apprenticed myself to a great baker to learn how to bake. And I feel that these kind of experiences, especially when you're doing it for the first time, gives you an ability to see things very freshly. And you have that sense of wonder that comes with first sight, and you also get the common possibilities of a fish out of water, doing something that he or she is not very good at and the learning that comes from that.

So one of the things I always think about when I'm starting a project like this is, what are the different perspectives that I need to bring to bear on this subject? I don't believe any one perspective can unlock a subject as complex as psychedelics. So you need to look at it — and this was true when I was writing about food and plants. Nonfiction gets interesting when you multiply the perspectives or layer the different lenses that you bring to. So you can look at this through the lens of neuroscience, say. A very interesting lens illuminates a lot.

But that doesn't tell you anything about the lived experience. Because neuroscience cannot reach consciousness. It has no tools for penetrating or measuring consciousness, except the absence of it. And so phenomenology — the accounts of lived experience are very important. And I could get those from the volunteers I interviewed and from my own experience. So I needed a memoiristic element, as well as the neuroscientific element. And then there's the historical lens. History always illuminates things. How did we get here? Why did it take so long to get here? What have we learned along the way?

Within that frame, the most challenging part was describing the psychedelic trips. And William James famously said that the mystical experience is ineffable — beyond the reach of language. Well, I had an effort. I couldn't just let that lie and just say you had to be there. But it's very hard to describe because these are kind of pre-linguistic experiences.

One of the researchers I interviewed said — I said why are these experiences so hard to describe? And he said, well, imagine a cave man coming to New York in 2019, and he sees subways going by, and planes overhead, and people talking on phones, and the noise of traffic. And then he goes back to his friends in the cave, and what does he say? He says it's loud and fast, and he doesn't have the words for cell phone or the bustle of urban life. The language doesn't exist.

But I had to find the language, and so I approach those chapters with a great deal of trepidation and as much trepidation as I had about the trips themselves. And it took me a while to figure out how to write about it. Because I was trying to write for a general audience. I'm not writing for psycho nuts. I'm writing for people who've never had this experience, but might be curious. And I want to tell them what it's like. And it took me a while, but I gradually found a voice in which I could do it. And this comes through trial and error of writing an account and reading it and going, that sounds crazy. Or that sounds really banal. "Gee, you've had an insight that love is the most important thing in the universe. That's a Hallmark card."

The solution I found to that was to be very candid with my reader and essentially tell the narratives. And then break the fourth wall at various points, step out of the narrative, and say, "Look, I know how banal this sounds, but let's talk about banality for a little while. There's a very thin line between the profound and the banal. What is a platitude? Well, it's a truth that's lost its emotional force from sheer repetition. So how do we recover that?" Or, in another moment, where if something crazy happens, I would break the wall and say, "I know how crazy this sounds."

So I kind of move in and out of the experience, sort of the way a memoir writer would juxtapose the point of view of the 10-year-old with the adult and go back and forth. Because if you just stayed in the head of the 10-year-old, it would have no perspective. It might have vividness, but no perspective. And if you stayed in the head of the adult, it wouldn't be evocative. So memoirs, I realized — and I realized this teaching them because I teach writing — get their savor or their edge from that going back and forth in perspective. And I kind of did the same thing, not in a temporal dimension, but on this inside outside of the experience.

So I found my voice to write about it, and once I did, it was great fun to write about the trips. I've never had more fun as a writer. I loved describing them. And I and I would license the absolute madness of parts of the experience by saying, "Yeah, I know, it's crazy, but this is what happened." So this book was great fun to write. I was learning new things. I loved being at the beginning of the learning curve on this subject, rather than at the end. One of the reasons I moved from writing about food to this was I realized I had become an expert after three or four books on food.

And I don't like writing as an expert. I think readers don't like experts. I think they want someone to take them on a journey. And my education becomes the story that you follow. I always start out as an idiot in my writing. I'm naive. I don't know what's going on. I'm confused. I have questions in my head. I'm reluctant. I'm skeptical. And gradually, I build my knowledge. We learn things. Things happen. And by the end, we are experts, but we're not at the beginning. And I think that's a really important lesson for writing in general.

I think even though when you finish a research project, you have your conclusions, don't put them on page one. That's like starting the joke with the punchline. Storytelling is you start from knowing less, and you move toward knowing more. So that the novelty of this subject, the fact that I was very naive, was a virtue, or at least, made a virtue. So we shouldn't be afraid of our ignorance. We should use it in our storytelling.

How to Change Your Mind: What the New Science of Psychedelics Teaches Us About Consciousness, Dying, Addiction, Depression, and Transcendence 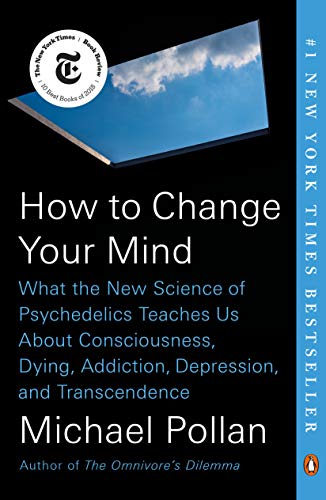 How to Change Your Mind: What the New Science of Psychedelics Teaches Us About Consciousness, Dying, Addiction, Depression, and Transcendence
List Price: $18.00
New From: $11.39 in Stock
Used From: $11.37 in Stock
From Your Site Articles
Related Articles Around the Web
writing learning storytelling creativity neuroscience curiosity michael pollan

E.T. could already be among us and we wouldn’t know, says NASA